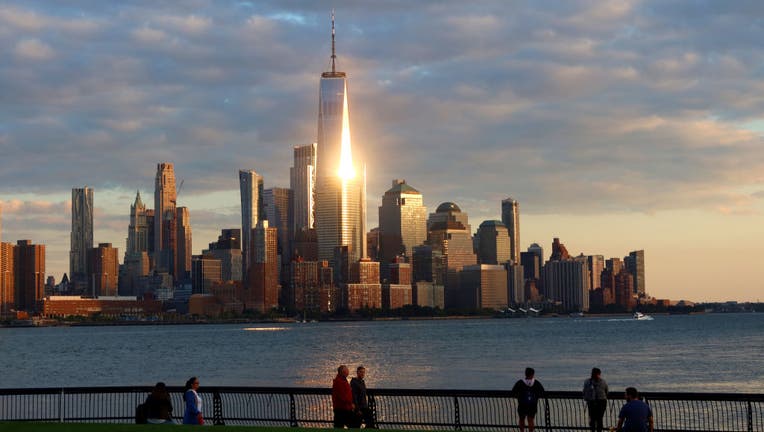 HOBOKEN, NJ - OCTOBER 5: People walk through the park on Pier A as the sun sets on lower Manhattan and One World Trade Center in New York City on October 5, 2020 in Hoboken, New Jersey. (Photo by Gary Hershorn/Getty Images)

LOS ANGELES - Most COVID-19 patients in Southern California during the early months of the pandemic appear to have been infected by a variant from New York state via Europe, not directly from China.

The findings were based on a genetic analysis of the virus found in tissue samples taken from 192 patients diagnosed with COVID-19, according to a study released Wednesday by Cedars-Sinai Medical Center.

Investigators said they believed their study was the first published genetic characterization of SARS-CoV-2 in the Los Angeles population using an advanced technique known as next-generation sequencing, which analyzes all the genes, or genome, of a virus or other organism. The study was published in the journal JAMA Network Open.

"Based on these findings, we concluded SARS-CoV-2 was likely introduced into the Los Angeles community predominantly from New York state but also through multiple other independent transmission routes that included Washington state and China,'"said Dr. Eric Vail, assistant professor and director of molecular pathology in the department of pathology and laboratory medicine at Cedars-Sinai. He was co-senior author of the study.

Specifically, investigators found that about 15% of the virus samples taken from the COVID-19 patients at Cedars-Sinai between March 22 and April 15 were genetically similar to published profiles of SARS-CoV-2 viruses from Asia, while 82% shared close similarities with variants originating in Europe.

"It was surprising to us that New York appeared to be the source of so much of the Los Angeles virus, especially since the first confirmed COVID-19 case in the U.S. involved a person who had returned to Washington state after visiting China,'' said Jasmine Plummer, research scientist at the Cedars-Sinai Center for Bioinformatics and Functional Genomics and associate director of the Applied Genomics, Computation & Translational Core. She was the other co-senior author of the study.