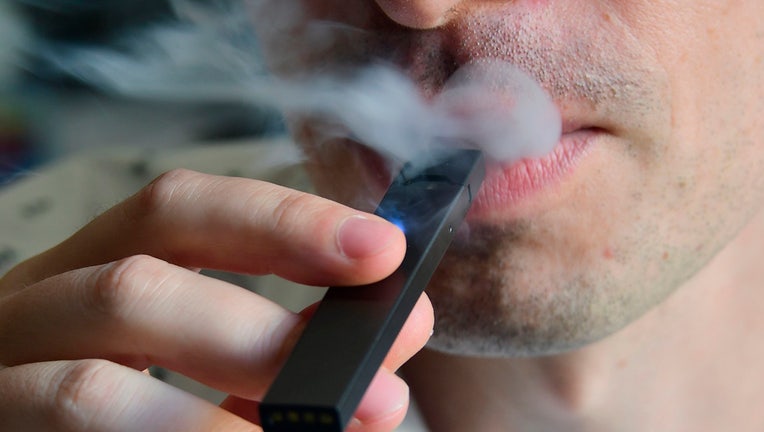 An illustration shows a person exhaling smoke from an electronic cigarette in Washington, DC on October 2, 2018. ( EVA HAMBACH/AFP/Getty Images )

LOS ANGELES (CNS) - Cigarette smoking has reached a historic low among Los Angeles County high school students, but vaping is on the rise, with more than 30 percent of students reporting that they have used e-cigarette products, according to a survey released today.

According to the 2017-18 California Student Tobacco Survey and the California Healthy Kids Survey, 10% of Los Angeles County high school students regularly use e-cigarettes, up from 6.4% the previous year. E-cigarettes used for vaping were the most commonly used tobacco product among high school students, the survey found. Only about 1.7% of students expressed a preference for cigarette smoking.

"A new generation has become addicted to nicotine through flavored vape products like e-cigarettes," Barbara Ferrer, director of the Los Angeles County Department of Public Health, said in a statement. "The epidemic of our unacceptable, and we will work to reverse this trend as we partner with others to ensure a tobacco-free generation."

According to the survey, 83% of high school students who use tobacco reported using a flavored product, with fruit or sweet flavors the most popular.

The survey also found that 61% of high school tobacco users purchased e-cigarettes from vape shops, although selling tobacco products to minors is illegal.