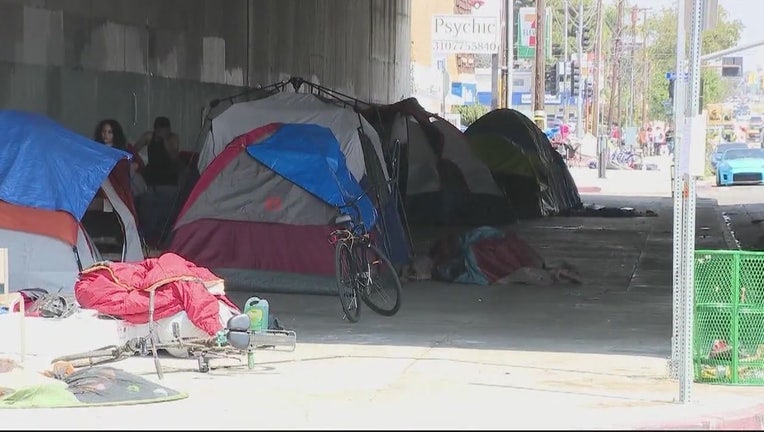 LOS ANGELES (FOX11) - Los Angeles will receive about $124 million in state funding this year to help address its homeless problem.

Mayor Eric Garcetti says it's a substantial increase from last year's allocation but far from the billions the city is requesting.

"We all know that homelessness is perhaps the most complicated issue that we'll confront in our lifetime,'' Garcetti said during a news conference at the Homelessness Response Center. "We asked for $2 billion, but you always ask for what you need, but you get what you get. And we're not upset, we're actually quite pleased.''

The state allocated about $257 million for cities to address homelessness this year. Garcetti said about half of the $124 million earmarked for Los Angeles will go to the city's interim housing program and shelters; $9 million will be put into alternative housing models including shared housing; and $7 million will go to addressing issues on Skid Row.

Another $14 million will go toward prevention efforts, such as the eviction defense program and emergency rental assistance. Funding will also go to assisting homeless youth.

"If we can reduce the duration of (a) first homeless experience, we will prevent that family from becoming chronically homeless over time,'' said Sen. Holly Mitchell, who chairs the senate Committee on Budget and Fiscal Review. Mitchell was key to securing the funding Los Angeles received this year, Garcetti said.

Los Angeles received about $85 million last year in homeless funding from the state.

The city has already allocated more than $460 million toward addressing homelessness in this year's municipal budget, along with other funding for housing and cleanup services. More funding was allocated for CARE and CARE-plus teams, which will conduct cleanups and outreach at homeless
encampments starting this fall.

Garcetti said that's about 16,000 people a year. Los Angeles has more than 36,000 homeless people -- a 16 percent rise from last year, according to the latest homeless count.

Assemblyman Miguel Santiago said a bill has been introduced in Sacramento aimed at streamlining funding for shelters and the homeless.

"This year, we rolled up our sleeves. We would have wanted more (money), but we fought hard to get a better percentage,'' Santiago said. "I think we recognize that homelessness is an issue of biblical proportions. It's spreading across the country, and the numbers upticked here in Los Angeles.''

Garcetti said 1,900 beds at temporary shelters will be available by the end of next year, with three new shelters set to open by the end of the summer.