A brief history of St. Patrick's Day and how it became a day to celebrate Irish heritage.

However you view St. Patrick's Day — as a holy day of obligation, a celebration of Irish culture, or an excuse to imbibe a green pint of beer — millions across the globe will observe the holiday on March 17th. But other than "drowning the shamrock" and getting pinched for not wearing green, what do we really know about the holiday?

For the answers, Fox News consulted Monsignor Robert T. Ritchie, the rector of St. Patrick's Cathedral in New York City, to explain a few of the finer points about this widely celebrated holiday.

"The official feast day in the Catholic Church of St. Patrick of Ireland is March 17," Ritchie said. "That's why it's always celebrated here in New York on the 17th itself; in Ireland, it's a holy day of obligation, and the people have to go to church."

As Ritchie explained, the practice of celebrating St. Patrick's Day in America pre-dates the country itself. "It's amazing, it started before there was a United States," he said. "George Washington's troops, who were Irish at the time, marched up Broadway on the 17th of March, and they celebrated the first St. Patrick's Day in New York."

Quinn reiterated that the celebration of Saint Patrick’s Day on March 17th is not an arbitrary, Hallmark-appointed holiday.

"St. Patrick died on the 17th of March in around 460 AD," he explained. "The recognition of this date as an official Christian Feast Day in Ireland happened in the 17th century, and since then, the day has grown in importance and is often regarded as the most celebrated of national days across the world."

As for the iconic parades, however, Quinn said Boston beat everyone to it. "Boston hosted the world’s first St. Patrick’s Day parade in 1737. New York followed, and then we took on this great idea in Ireland," said Quinn. 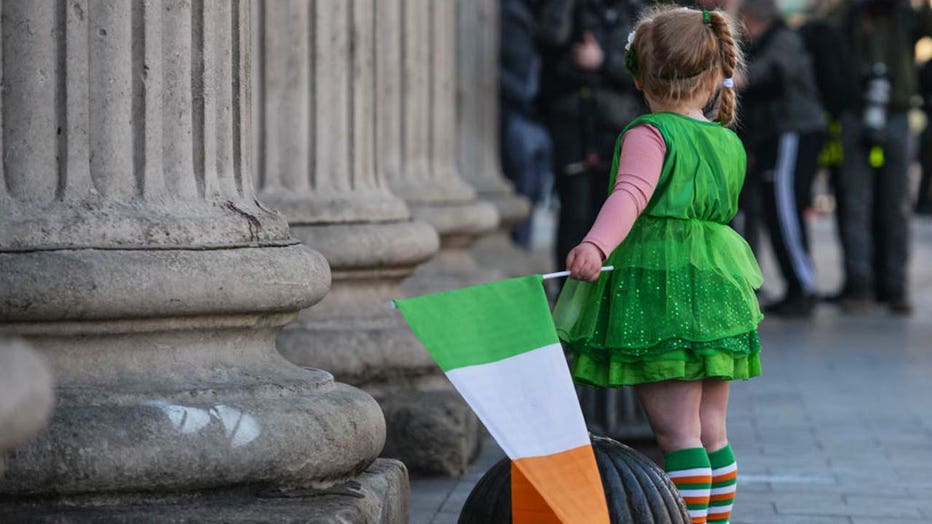 FILE - A young girl poses for a picture with an Irish tricolour flag.

Parades are not the only event to signal St. Patrick’s Day across the globe. Well-known "greening" traditions in the U.S. include dyeing the Chicago River; lighting New York City’s Empire State Building green, white, and orange; and dyeing the fountain on the North Lawn of the White House green.

"Most people wouldn’t know, though, that the Sydney Opera House, The Christ the Redeemer statue in Rio de Janeiro, The Great Wall of China and the Pyramids in Egypt all turn green on St. Patrick’s Day too," said Quinn.

The vice chair of the Irish Whiskey Association also noted that drinking and St. Patrick’s Day did not always go hand-in-hand. Pubs were closed on March 17 in Ireland as a sign of respect for the religious observance, which happens to fall in the middle of Lent. In fact, it wasn’t until 1970 that patrons could go to a pub on St. Patrick’s Day.

"The only place you could buy a beer before 1970 was at Dublin’s Dog show which, for some reason, was regarded being outside the law," said Quinn. "As you can imagine, Dublin got a huge number of new dog lovers that day."

With no current restrictions in place on March 17, Quinn added that he prefers to drink — of course —  a Tullamore D.E.W. Or, more specifically, a "D.E.W. and a brew," just like his father used to do.

"Of course, back then I thought he was a bit mad – and now I realize he had it sorted," said Quinn.

If you, too, feel like celebrating with a drink, check out some of the recipes below.

Directions: Combine ingredients, aside from garnish, in a shaker. Shake, and pour into a single rocks glass. Garnish with a dehydrated cinnamon-sugar lemon wheel.

Directions: Preheat a clear-stemmed glass with very hot water. Add the sugar and brewed coffee and stir well. Once the sugar has melted, stir in in the whiskey. Gently whip the heavy cream by shaking it in a protein shaker with a blender ball — you want a somewhat loose, non-stiff consistency. Pour the cream over the back of a hot teaspoon, over the top of the drink (to prevent cream from penetrating the liquid's surface). Finally, garnish with grated nutmeg or cinnamon for a spicy finish.

Directions: Stir Tullamore D.E.W. Original and lemon juice in a mug filled with ice. Top with ginger beer and garnish with a lime wheel.

Combine whiskey, lemon juice, honey, ginger syrup and hot water in a mug. Stir until all ingredients are incorporated. Garnish with a lemon wheel and top with shaved cinnamon.

Emily DeCiccio is a video producer and reporter at Fox News Digital Originals. Tweet her @EmilyDeCiccio.