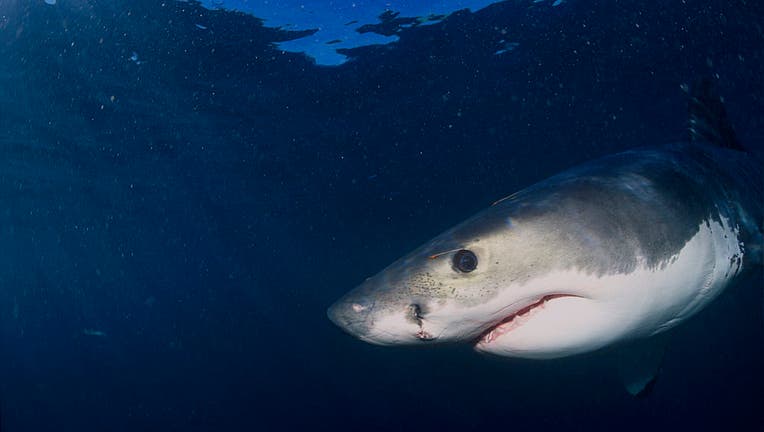 Great White Shark, Carcharodon carcharias, near the water surface, six nautical miles from the coast of Gansbaai, quite close to Dyer Island and Geyser Rock, The surface hunter often finds his prey on the water surface. The super-robber great white s

Juvenile white sharks are "hanging out" near beaches in Southern California but are not necessarily interested with humans, says the researcher of a study published in June.

A group of researchers from California State University, Long Beach and the University of Minnesota published the study in June, and one of their findings is that juvenile white sharks tend to spend long amounts of time along Southern California coastal beaches because there is more food and fewer predators.

"They also form loose aggregations using relatively small areas along coastal beaches spending days to months in these nursery habitats where water is warmer, prey species are more abundant and there are few larger predators," the study states.

One of the authors of the study, James Anderson, told Fox News that the sharks, when near the coast, are extending a "very minimum" amount of energy.

"One of the things we're trying to get across with this paper is just how lethargic essentially these sharks are when they are resident and hanging out in these beach locations in Southern California. And they really, really are extending the very minimum of energy as possible, paying very little attention to anything, anyone around them," Anderson said.

In the early morning and closer to sunset Anderson says that the sharks' activity picks up and they're likely chasing after prey.

However, Anderson said that beachgoers shouldn't be too concerned by the findings.

"These animals are generally just cruising around during the daytime, pay no attention to your body. They're not really a big threat to me," Anderson said. "So, you know, I always say that it's better to be aware of these things than to be ignorant of these things and to say that they should be concerned? I would say, no, you don't need to be concerned. And the evidence and the statistics point to this."