Opposition to plans for warehouses in Bloomington

Some members of the community are pushing back against new warehouses in Bloomington.

SAN BERNARDINO COUNTY, Calif. - "Bloomington is NOT for sale," say some residents along Santa Ana Avenue, just across the street from Bloomington High.

That’s the Northern boundary of a 200+ acres warehouse development project that would demolish dozens of homes in the neighborhood. 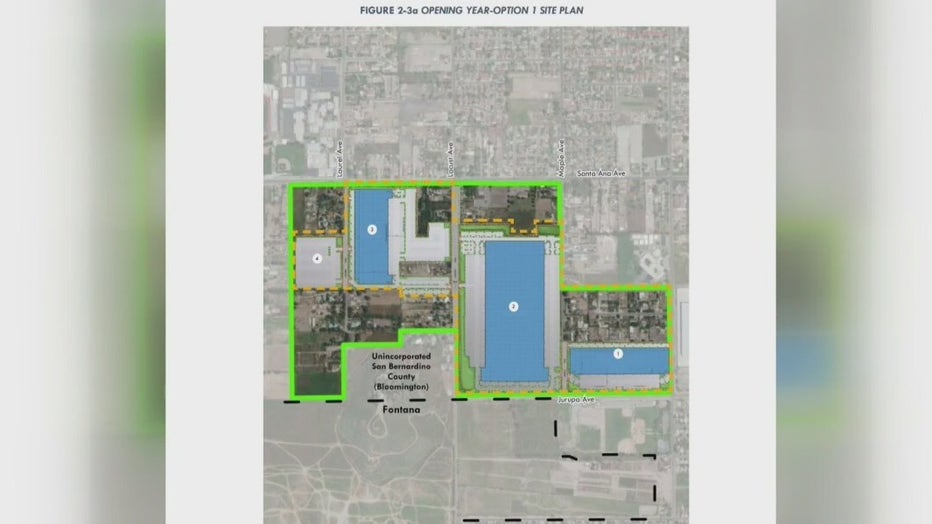 The boundaries are rough, Santa Ana Avenue to the North, Maple Avenue and Linden Ave to the East, Jurupa to the South and Alder to the West.  The Concerned Neighbors of Bloomington say over 200 homes are set to be demolished.

The developer says it’s less than a hundred properties, which they are offering to purchase.

It’s the latest battle in the thorny issue of Warehouse Development in the Inland Empire, where enormous projects are popping up all over. On the one hand, they bring in jobs and improvements to streets, plus needed tax revenues for the cities that have approved them.

On the other hand, they do away with old neighborhoods, with properties zoned for agricultural use, and generational traditions of homesteading. Families live off their land, with small organic farms and nurseries. Goats and chicken abound, as do horses.

"We want to grow our food and sell it, not work in a warehouse packing boxes" says one resident.

Others worry about pollution from trucks coming in and out, affecting students going to schools bordering the huge complexes, and traffic.

On the other side, some residents see this as a way to sell their aging homes for "serious cash," as one put it, adding that "change is good".

Resident Thomas Rocha has brought up a good point at community meetings, saying that in the past, the San Bernardino County Board of Supervisors talked about keeping Bloomington as a rural, family-oriented city.  Now, warehouses have popped up everywhere, and many are selling to developers, saying "I don’t want to live next to a this huge warehouse".

The Bloomington Business Park Specific Plan would result in the County changing the zoning from large acre residential to medium density residential and industrial zoning, for 24 acres.

The Howard Industrial Partners, the project in question,  is undergoing environmental review and will be presented to the County Supervisors for a vote, possibly this year. We reached out to developers for comment, with no success. They are quoted as saying that the homes will be replaced with others, that will go for sale at "fair market values".

"They are not just tearing down houses" says one long-time resident. "It’s homes, a community and a lifestyle they are tearing down".