Schools step up security in response to TikTok threats

A new TikTok challenge has several school districts across the country taking heightened precautions, including right here in Southern California.

The unsubstantiated threats circulating on TikTok warn of mass violence at schools throughout the country allegedly planned for Friday, December 17. The messages posted on the platform did not contain specific information about particular schools or locations. It’s unclear where the TikTok school threat emerged.

Officials are assuring parents that the viral posts are not considered credible. And while California is not one of the states increasing security on a state level, one school in Northern California is shutting down Friday out of what they are calling "an abundance of caution."

Gilroy High School's principal said making the decision to close the school on the last day before winter break has not been easy, but final exams scheduled for Friday at Gilroy High will be postponed until January. Gilroy Police, by the way, say they found the threats on social media not to be credible.

Still, school officials in states including Arizona, Connecticut, Illinois, Montana, New York and Pennsylvania, said there would be an increased police presence because of the threats.

The Los Angeles Unified School District released a statement saying that they have no reason to believe any schools in the district are in any danger. They also asked parents to talk to their kids about the "appropriate use of social media and to remind them that their actions and words have consequences." 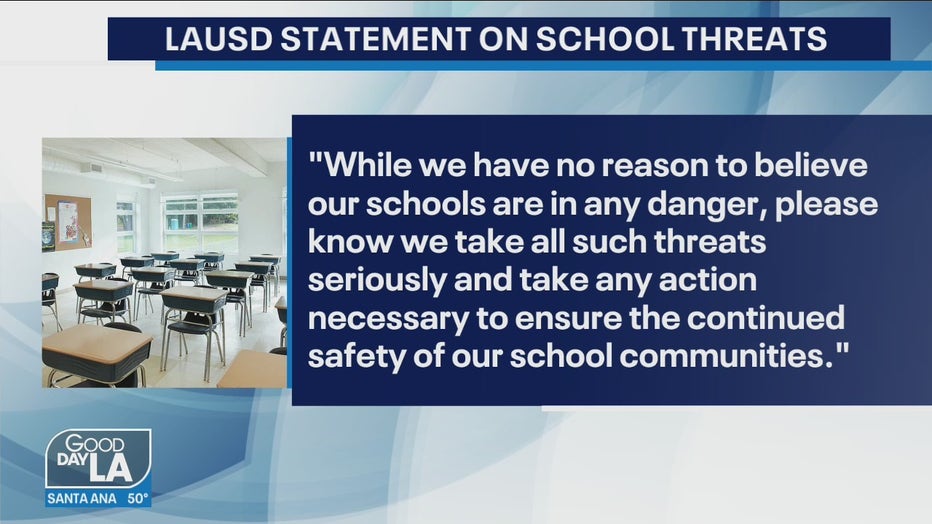 "Our school administrators work with school site staff, Los Angeles School Police and local and federal law enforcement officials — where warranted — to ensure that all threats are fully investigated and handled appropriately," the statement continued.

Meanwhile, the Seal Beach Police Department said it will be increasing patrols and security around McGaugh Elementary School following what they referred to as the "unsubstantiated and nonspecific" TikTok threat. The department said it's not aware of any specific threats made regarding McGaugh Elementary School or other schools in Orange County, but will be staffing extra police officers on the McGaugh campus "out of an abundance of caution."

The posts in question follow a disturbing trend that has had students acting out in response to social media challenges.