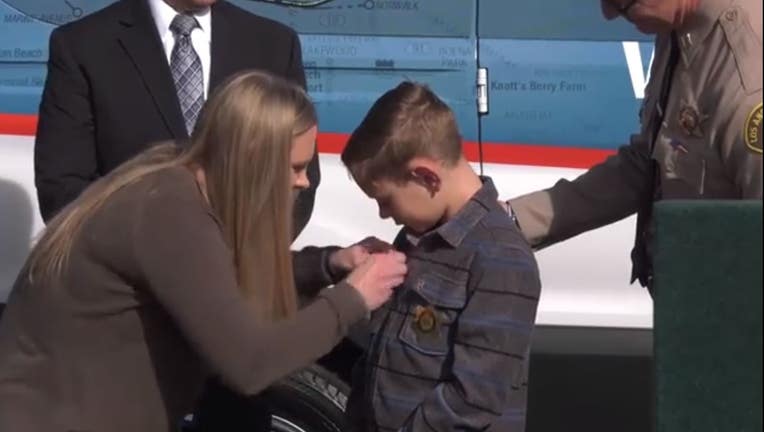 LAKEWOOD, Calif. - An 8-year-old boy was honored Wednesday by the sheriff's Lakewood Station and Lakewood city officials for finding a missing 83-year-old man who suffers from Alzheimer's disease.

Roger Dunworth left his residence in the 4000 block of Marber Avenue in Lakewood about 11:30 a.m. on Sunday, according to Deputy Juanita Navarro-Suarez of the Sheriff's Information Bureau.

While authorities were searching for Dunworth, a neighborhood search team was quickly formed which included 8-year-old Jaxon Opdyke and his grandmother and mother, Navarro-Suarez said.

Opdyke spotted Dunworth about an hour into the search.

"Look! Down that street," Opdyke said when he saw a man who fit Dunworth's description. His grandmother asked the man if he was Roger Dunworth, and Dunworth replied "Yeah, I could sure use a ride," Opdyke recalled.

Dunworth, who was unharmed, was reunited with his family, according to Navarro-Suarez.

The Los Angeles County Sheriff's Department's Lakewood Station honored Jaxon Wednesday with a sticker badge and made him a "deputy for the day" for his good work finding Dunworth, Navarro-Suarez said.