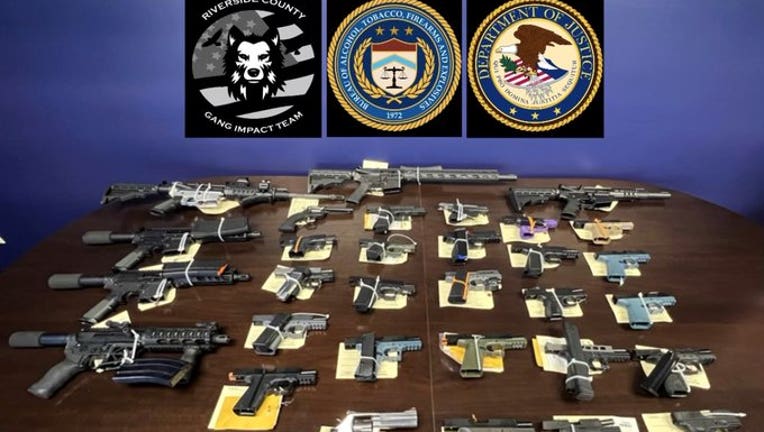 In an investigation with the Riverside County Gang Impact Team dating back to last summer, ATF say they seized more than 30 guns, including several fully-automatic guns. Most of them, officials say, were what's commonly referred to as "ghost guns" — firearms with no serial numbers or identifying marks. Authorities say they also seized several pounds of methamphetamine.

Damon "Damage" Moore, 27, of Bellflower, was charged with engaging in firearms sales without  license, firearm, and distribution of methamphetamine. Investigators say in they seized 14 guns from Moore in the three-month period from September to November 2021, as well as more than 150 grams of meth.

Ruben "Trippy" Delafuente, 27, of Ontario, was charged with distribution of cocaine, dealing firearms without a license, domestic violenc , and possession of an unregistered firearm.

Damien Martinez, 22, of San Bernardino, was charged with dealing in firearms without a license, possession of a machine gun, and distributing meth.

Jose "Stoner" Urbina, 35, of El Monte, was charged with two counts of distribution of methamphetamine and being a felon in possession of a firearm.

Jesse "Stomper" Nava, 28, of La Puente, was charged with distribution of methamphetamine.