LA County officials are expressing concern over a fire in a ballot drop box in Baldwin Park that was clearly intentionally set. But what do they do now?

LA County Registrar Dean Logan reiterates that, but adds, “And, we take the integrity of the elections process very seriously.”

The goal to answer reporter questions and calm voter nerves after the Sunday night attack on a ballot drop box in Baldwin Park. 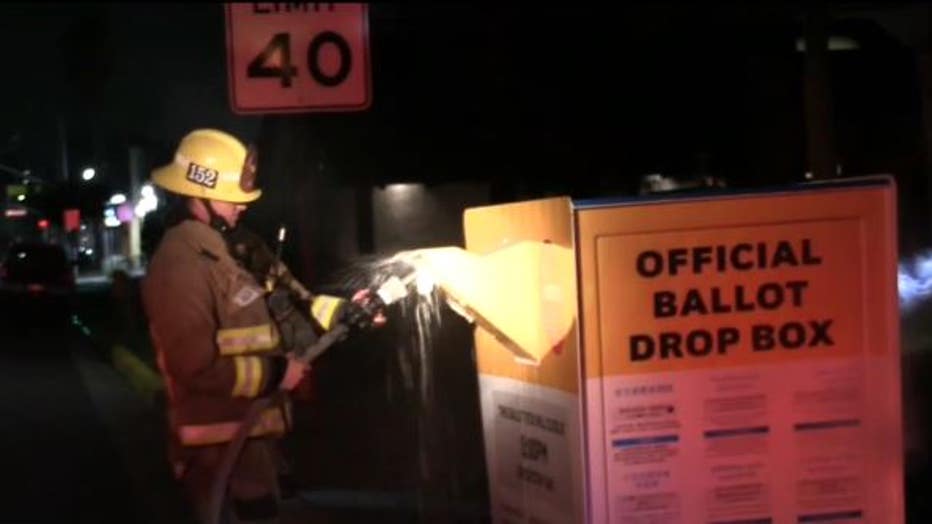 Someone started a fire in the box. It’s not clear why or who did it, but the evidence is there... over 200 ballots.

Registrar Logan says many were damaged. Some were still recognizable. Others may have to be matched with voters.

Orange County has placed fire suppression units in their ballot drop boxes to try to prevent what happened in Baldwin Park. Dean Logan says he’s aware but doesn’t agree with the Orange County Registrar that they are necessarily a good idea.

Says Logan, “I think the concern is that they would destroy ballots so I would want to have more information about that before deciding to add those tour boxes.”

And, with regard to the election, there is the question of will see a record number of voters exercising their rights in the 2020 election?

Says Logan, "It’s a little bit of a crystal ball exercise to try to predict what turnout will be. I think certainly what we’re seeing in this early numbers is that it's a sign of a potentially high turnout. Of course, presidential elections is where we see the highest turnout. In raw numbers of votes, I think we could see a record in this election because we have more registered voters than we have historically in Los Angeles County.”

Meanwhile, Robert Lopez, the current interim Police Chief Baldwin Park says his department has been on the case.

He’s worked for law enforcement for 4 decades and used to be a commander with LAPD. His officers now are making sure to check the boxes on their patrols.

Lopez says,  “We have made sure our patrols have been stepped up in the areas where the other ballot box is at.”

Lopez says he’s helping the county determine where a replacement box should be placed. Says the Interim Chief,  “I’ve been asked to help find a location that’s safe that has a lot more lighting, if possible, to make sure it doesn’t happen again.”

But the tough question is how tough is it to find whoever did this? Lopez’s answer? "It is tough especially tough when you don’t have the cameras. but I’m hoping somebody who was driving by or walking by at that time might have seen something or walked past it and can provide us with a little information.”

What is clear are the words on the box itself. They read: 'Tampering with this ballot box is a felony (per) CA Election Code 18500."