Nearly 17 years after being sentenced to die, Scott Peterson was resentenced to life without parole Wednesday during an emotional hearing in which family members of his slain pregnant wife, Laci, called him out for the Christmas Eve killing in 2002 and his apparent lack of remorse.

REDWOOD CITY, Calif. - Nearly two decades after being sentenced to die, Scott Peterson was resentenced Wednesday to life in prison for the 2002 slayings of his pregnant wife and unborn son that gripped the world then and since.

Peterson will serve a sentence of life in prison without the possibility of parole for the murder of his 27-year-old wife, Laci, and 15 years to life for the death of their unborn son, Connor, who would have turned 18 years old this month.

The 49-year-old Peterson did not speak during the hearing because Superior Court Judge Anne-Christine Massullo didn’t allow it. 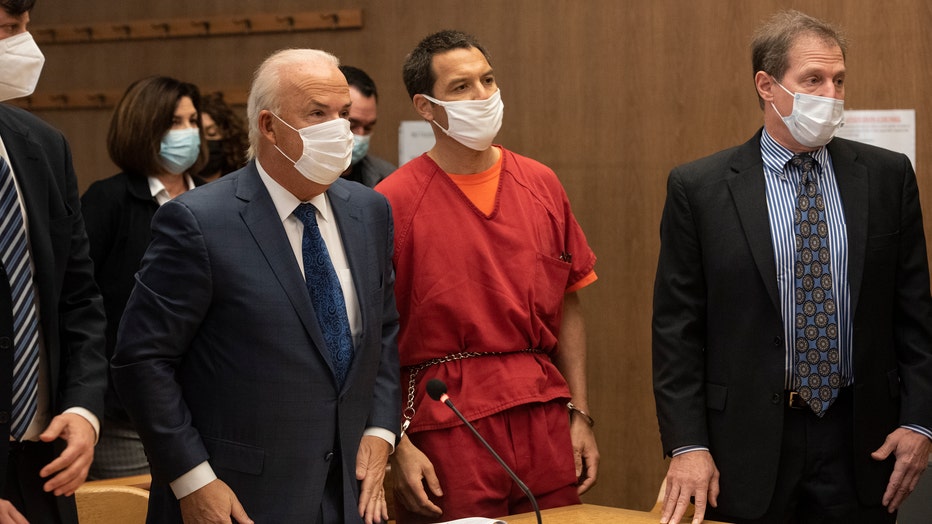 Scott Peterson and his council stand as the Judge Anne-Christine Massullo enters the room during a resentencing hearing at the San Mateo County Superior Court in Redwood City, Calif., Dec. 8, 2021. Peterson appeared in San Mateo Superior Court for th

His expression was hard to determine as his face was partially covered in a mask. He sat attentively next to his attorney, Pat Harris, however, dressed in a red jumpsuit, his neck craned to hear what was being said.

Peterson has already been sentenced for the two deaths.

Convicted killer Scott Peterson was resentenced to life in prison without parole for the murder of his wife Laci and unborn son in 2002. Peterson's attorney Pat Harris and sister-in-law Janey Peterson made statements after the hearing to express their support for him and claim that he is not guilty of the crimes.

Laci was eight months pregnant when Peterson killed her and their unborn son on Christmas Eve 2002, prosecutors said. Using his fishing boat, he dumped their bodies into the San Francisco Bay where they were found months later.

The Petersons lived in Modesto, but due to the relentless publicity around the search for Laci, the trial was moved to San Mateo County, where the hearing was streamed online and nearly 2,000 people watched it. 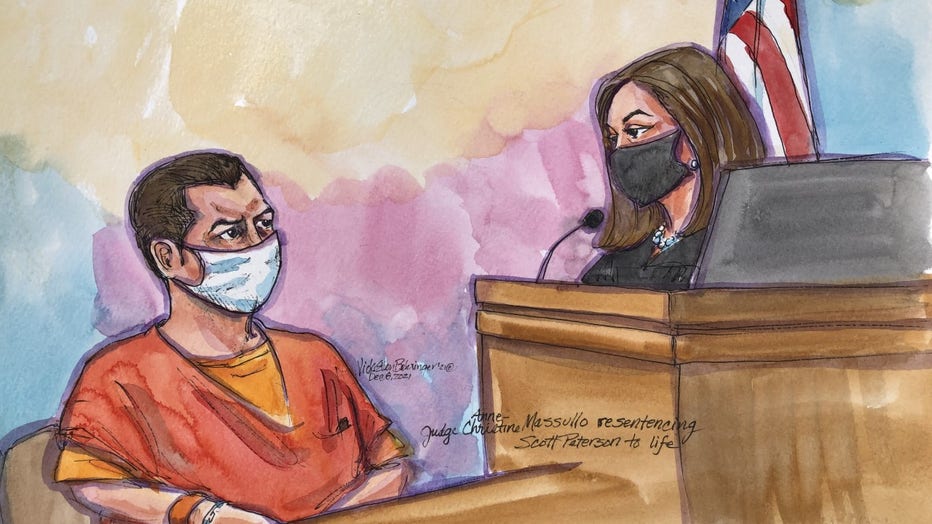 Scott Peterson, dressed in a red prison jumpsuit, is seen in this sketch from a San Mateo court on Dec. 8, 2021. Peterson, who has been sentenced to life without the chance of parole, maintains his innocence and is seeking a new trial. Drawing by Vic

Laci's family spoke, alternating between tears and vitriol as they spoke to Peterson.

"Not a day goes by that I don't think how unfair it is that I don't have a sister," Laci's sister, Amy Rocha, told the court through tears. "You took that away from me. Every Christmas Eve, I still relive the nightmare."

Her brother, Brent Rocha, also broke down, describing his late sister as the "life of the party" and a young woman who lived to laugh.

"We are devastated and traumatized," he said, describing Peterson as a "sociopath" who "shows no remorse."

Laci's mother, Sharon Rocha, told Peterson that not only has he shown no remorse, he also has shown no grief.

"You betrayed her," Rocha said angrily. "Your evil, self-centered, unforgiveable selfish act ended two beautiful souls. And for what reason? There was no reason other than that you just didn’t want them anymore. You didn’t want a baby nor the responsibility of being a father. You’re a coward." 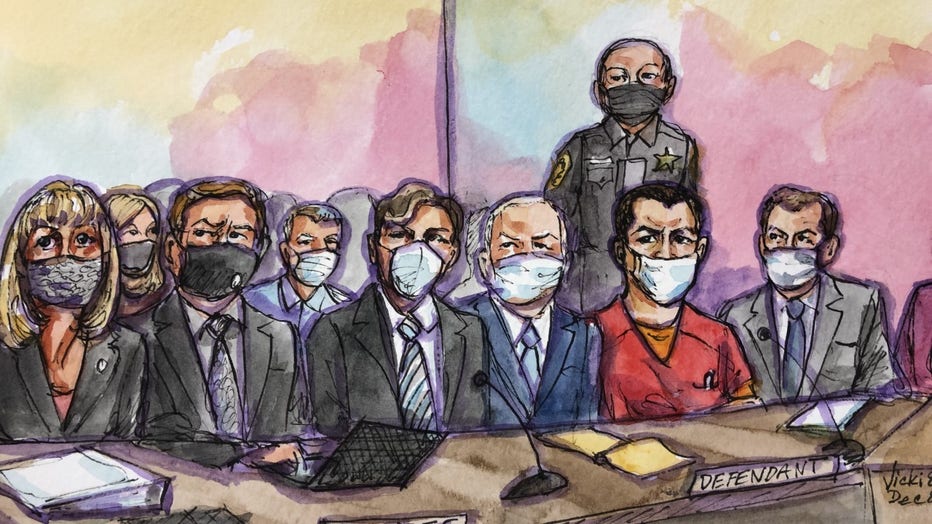 Scott Peterson, dressed in a red prison jumpsuit, is seen in this sketch from a San Mateo court when he was resentenced on Dec. 8, 2021 to life without parole for the killing of his wife and unborn son Drawing by Vicki Behringer

As for his motive? Sharon Rocha lashed out at Peterson, telling him he killed her daughter and unborn grandson "just because you didn't want to be a father."

Peterson was eventually arrested after Amber Frey, a massage therapist living in Fresno, told police that they had begun dating a month before his wife’s death, but that he had told her his wife was dead. He told Frey that the holiday season would be especially difficult for him that year because it would have been the first Christmas without Laci.

Peterson had supporters in the room but they were not allowed to speak. 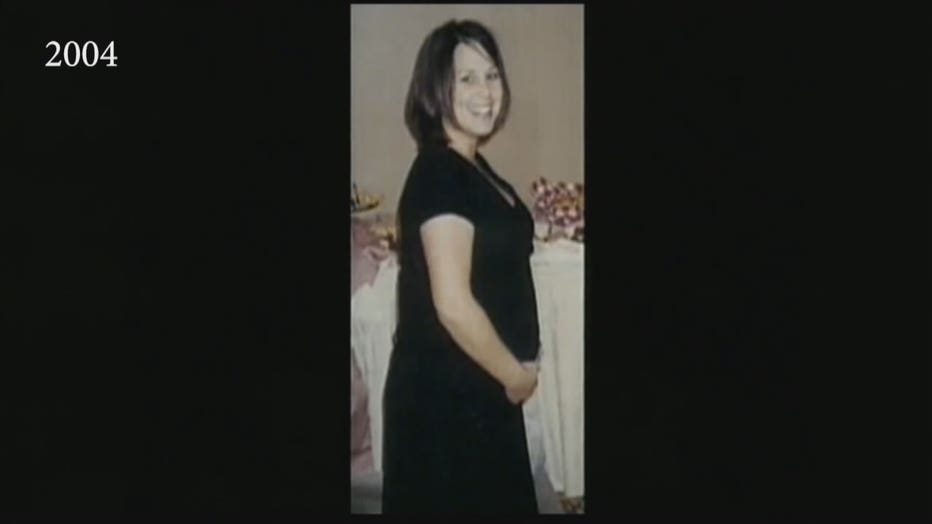 Massullo, who resentenced Peterson, is separately considering if Peterson was prejudiced by juror misconduct.

But she opted to resentence Peterson first, over the objections of his lawyers, to resolve a problem with his status.

Massullo said Peterson couldn’t stay on death row at San Quentin, where he has been since 2005, once prosecutors said they would not again seek his execution. He has since been moved to the county jail for resentencing and is expected to remain there until Massullo decides on whether he should get a new trial.

She plans about a weeklong hearing from Feb. 25 through March 4 to hear defense claims that the woman known as Juror 7 falsely answered questions during the selection process.

They say she actively sought to join the jury and later co-authored a book on the case. Richelle Nice has not been named in court papers but co-authored the book with six other jurors.

Defense lawyers contend she was biased because she had been a crime victim, which she did not disclose during jury selection. They learned only later that she had been beaten by a boyfriend in 2001 while she was pregnant. She obtained a restraining order during another pregnancy against a boyfriend’s ex-girlfriend because she was fearful the woman would harm her unborn child.

Nice said in a court filing that she didn’t think the restraining order was a lawsuit that she had to disclose on her jury form, nor did she "feel ‘victimized’ the way the law might define that term."

Massullo will have 90 days after next year’s hearing to decide if Peterson should get a new trial.

Nearly two decades after being sentenced to die, Scott Peterson was resentenced Wednesday to life in prison for the 2002 slayings of his pregnant wife and unborn son that gripped the world then and since.

Defense attorneys say new evidence points to nearby burglars, though investigators say they were ruled out as suspects.

Supreme Court justices said in their August 2020 decision overturning his death sentence that there was considerable circumstantial evidence incriminating Peterson in the first-degree murder of Laci and the second-degree murder of Connor.

It included that the bodies washed ashore near where Peterson admitted he was fishing on the day they disappeared. He had researched ocean currents, bought a boat without telling anyone, and couldn’t explain what type of fish he was trying to catch that day.

Also, in the weeks after Laci disappeared but before the bodies washed ashore, he sold his wife’s car, looked into selling their house, and turned the baby nursery into a storage room.

Harris, Peterson's attorney, told the judge that his client – who maintains his innocence all these years later - finds himself in quite a "conundrum."

"When you're innocent and you claim it, then you have no remorse," Harris said, saying that Peterson "cares a great deal."

Harris said that Laci Peterson's family has every right to be upset, it's just that they believe in facts that he and Scott Peterson believe don't exist. 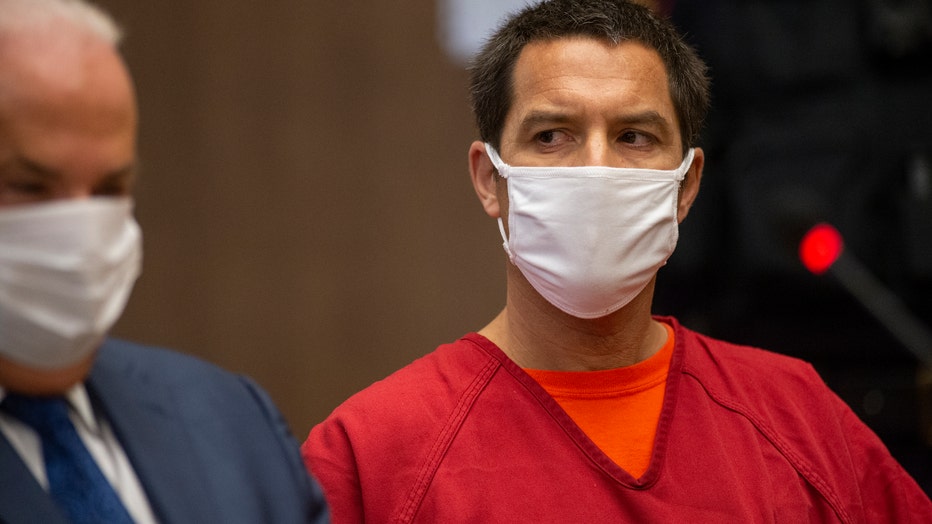