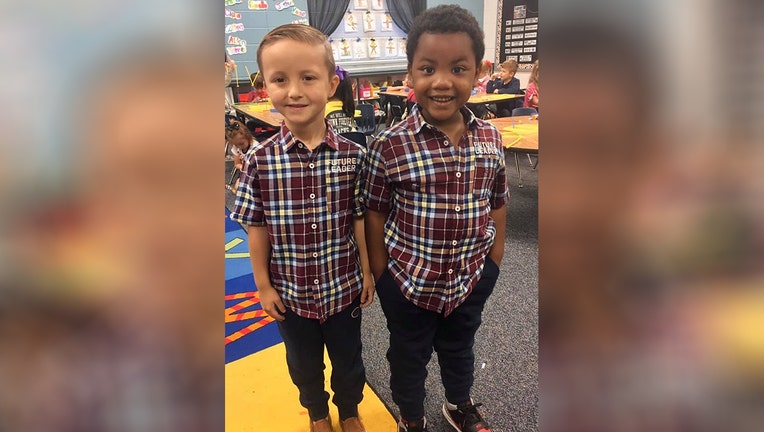 FOLEY, Ala. - A pair of kindergartners in Alabama dressed the same for their school’s twin day, with one insisting to his mother that they “look exactly the same.”

Last month, Myles went to his mother Britney Tankersley and “went on and on about how he had to be twins with a boy in his class for Twin Day,” the mom wrote on a Facebook post that displayed the two young boys. “Twin day” was an event part of the boys’ school in Foley, Alabama.

Myles told his mom that he and his classmate Tanner “look exactly the same - same eyes, same hair.”

“He was adamant that they were identical,” Britney said. “So after the kids went to bed I headed to Walmart at 9pm to get matching outfits.”

The boys’ teacher sent Myles’ mother a picture of the “twin” boys together with matching maroon-colored plaid shirts that had “FUTURE LEADER” imprinted above the shirt’s side pocket.

Myles is white and Tanner is black, but to Myles, skin color didn’t matter when determining how similar they look.

“Wouldn’t the world be such a better place if we could all view it through the eyes of a couple 5yr olds,” Britney said, adding a heart emoji at the end.