Biden announces new sanctions against Russia amid war with Ukraine

President Joe Biden announced new sanctions against Russia for the invasion of Ukraine including revoking permanent normal trade relations, which will make it harder for Russia to do business with the U.S. overall. The president also announced new bans on imports from Russia that include seafood, vodka and diamonds.

Russia escalated attacks in western Ukraine on Sunday with a deadly airstrike on a military base where Ukrainian troops had trained with NATO forces, bringing the conflict closer to Poland and prompting Ukrainian President Volodymyr Zelenskyy to renew his pleas for a no-fly zone.

Zelenskyy called Sunday a "black day," and said none of the activities at the military base would have threatened Russian territory. An American journalist was also killed Sunday and another injured when their vehicle came under fire from Russian forces outside Kyiv. Meanwhile, continued fighting in multiple regions caused more misery throughout Ukraine and has provoked international outrage.

Now in its third week, the war has forced more than 2.5 million people to flee Ukraine. Thousands of civilians and soldiers have been killed.

Here are some key things to know about the conflict: 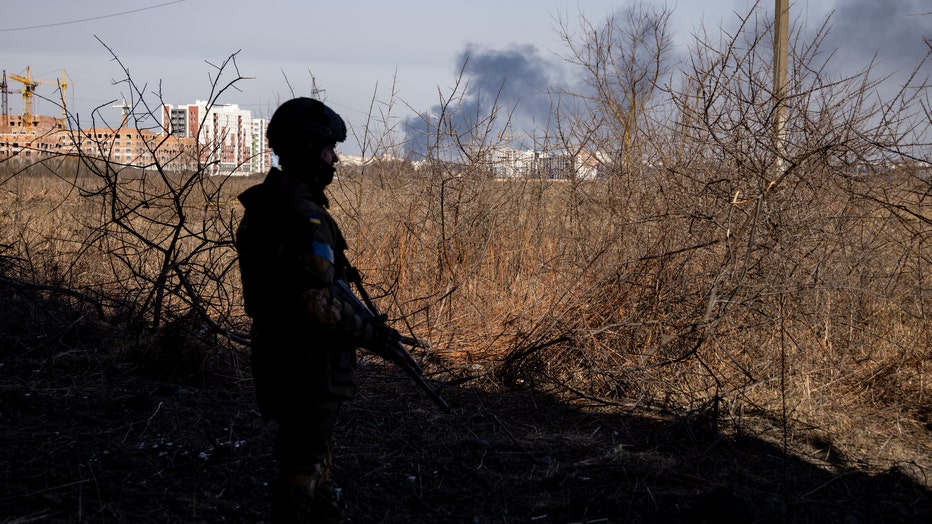 A member of the Ukrainian defense forces stands on patrol as civilian evacuations continue in the city on March 12, 2022 in Irpin, Ukraine. Russia continues its assault on Ukraine's major cities, including the capital Kyiv, more than a week after lau

What happened in Western Ukraine?

Ukrainian officials said at least 35 people were killed and 134 wounded Sunday when more than 30 cruise missiles were fired at the Yavoriv military range, just 25 kilometers (15 miles) from the Polish border.

The training base appears to be the most westward target struck so far in the 18-day invasion. The facility, also known as the International Peacekeeping and Security Center, has long been used to train Ukrainian military personnel, often with instructors from the United States and other NATO countries.

The base has also hosted international NATO drills. The site symbolizes what has long been a Russian complaint: That the 30-member NATO alliance is moving closer to Russia’s borders. Russia has demanded that Ukraine drop its ambitions to join NATO.

Zelenskyy said he had told Western leaders that the base was in danger and he again asked NATO to establish a no-fly zone over Ukraine.

"If you do not close our sky, it is only a matter of time before Russian missiles fall on your territory. NATO territory. On the homes of citizens of NATO countries," Zelenskyy said. Military analysts have said a no-fly zone is unlikely because the U.S. and its allies believe it could escalate the war.

Russian airstrikes also again hit the airport in Ivano-Frankivsk, another city in western Ukraine south of Lviv and 250 kilometers (155 miles) away from Ukraine’s border with NATO members Slovakia and Hungary. The city’s mayor, Ruslan Martsinkiv, said Russia’s goal was "to sow panic and fear."

What happened to the U.S. journalists?

U.S. journalist Brent Renaud was killed and another American journalist was hurt when Russian troops opened fire on their car in Irpin, near the capital, said Kyiv police.

A New York Times spokesperson said Renaud, 50, was a "talented filmmaker who had contributed to The New York Times over the years." He was not working for the publication at the time of his death. According to TIME, Renaud had been working on a TIME Studios project about the global refugee crisis.

The injured journalist, Juan Arredondo, was taken to a hospital in Kyiv. Journalist Annalisa Camilli recorded a video of Arredondo, lying on a stretcher at the hospital. In the video, Arredondo said he and Renaud were filming refugees when Russian soldiers opened fire. Their driver turned around, but soldiers continued firing, Arredondo said. Arredondo said an ambulance carried him away and Renaud, who was shot in the neck, was left behind.

In the besieged port city of Mariupol, the city council says more than 2,180 people have been killed in near-constant shelling by Russian forces.

The International Committee of the Red Cross said suffering in the port city is "simply immense" and that hundreds of thousands of residents are "facing extreme or total shortages of basic necessities like food, water and medicine." The organization said bodies of civilians and soldiers remain where they fell.

Zelenskyy said Russian forces blocked a humanitarian convoy carrying tons of aid to Mariupol on Sunday. But he said the convoy would try to reach the city again Monday.

In the southern Ukrainian city of Mykolaiv, near the Black Sea, authorities reported nine people killed in bombings. They said 32 people were also wounded in Russian airstrikes on a monastery and a children’s resort in the eastern Donetsk region.

RELATED: List of Russian goods that are banned, boycotted in US

What has the AP directly witnessed or confirmed?

At a hospital in Brovary, near Kyiv, doctors tended to the injured, including three people who drove over a mine.

Valentyn Bagnyuk, the hospital’s chief doctor, said 80% of patients at the hospital are civilians who have been injured by shelling.

Volodymr Adamkovych sat shirtless on a hospital bed, bandages on his abdomen covering wounds caused by a shell that landed in his home. He said he spent the night in his basement before he could safely reach the hospital. He said his wife and child were also home but were not injured.

In the Kyiv suburb of Irpin, Ukrainian soldier Alexei Lipirdi, 46, said that the Russians "want to intimidate us so that we will not be calm," but he and his unit remain defiant. Smoke billowed from distant buildings as he spoke.

RELATED: More US troops deployed to Europe amid Ukraine invasion

What is the latest on Ukrainian refugees?

While the number of people arriving in neighboring countries from Ukraine appears to have eased in the past week, the refugees’ harrowing accounts of destruction and death continue.

At the train station in Przemysl, Poland, refugees described traveling in packed trains and "people sleeping on each other" during their journeys to safety. Some heard explosions as they passed through the western area where Russian missiles hit the military training base.

More than 1.5 million refugees have arrived in Poland since the start of Russia’s invasion of Ukraine on Feb. 24 — the United Nations says a total of about 2.7 million people have fled Ukraine so far.

Polish border guard spokeswoman Anna Michalska said the numbers of refugees arriving have eased in the past week with about 79,800 arriving on Saturday, compared to 142,000 a week earlier.

RELATED: 'We're not done': Mila Kunis and Ashton Kutcher raise over $20M for Ukraine in a week

Are Ukrainian and Russian leaders talking?

Talks to establish a broad cease-fire in Ukraine have been unsuccessful so far. The Kremlin’s spokesman said another round of talks would take place Monday by videolink, according to Russian state news agency Tass.

Zelenskyy said these talks are held daily and he will continue negotiating with Russia and waiting for a meeting with President Vladimir Putin. His repeated calls to meet with Putin have gone unanswered.

Meanwhile, U.S. President Joe Biden is sending his national security adviser to Rome on Monday to meet with a Chinese official, amid concerns that Beijing is amplifying Russian disinformation and may help Moscow evade Western sanctions. The White House said the talks will focus on the war's impact on regional and global security.