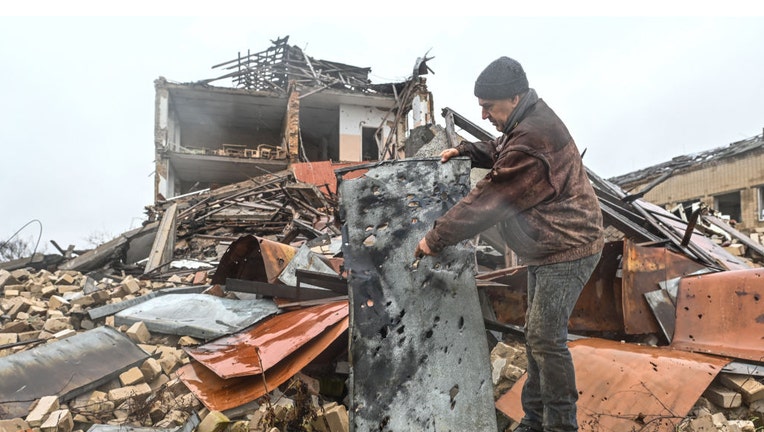 KYIV, Ukraine - Russia's Foreign Ministry warned Thursday that if the United States confirms reports that it plans to deliver sophisticated air defense missiles to Ukraine, it would be "another provocative move by the U.S." that could prompt a response from Moscow.

Ministry spokesperson Maria Zakharova said in a weekly briefing that the U.S. had "effectively become a party" to the war in Ukraine, following reports that it will provide Kyiv with Patriot surface-to-air missiles, the most advanced the West has yet offered to help repel Russian aerial attacks.

Growing amounts of U.S. military assistance, including the transfer of such sophisticated weapons, "would mean even broader involvement of military personnel in the hostilities and could entail possible consequences," Zakharova added.

She did not specify what the consequences might be.

U.S. officials said Tuesday that Washington was poised to approve sending a Patriot missile battery to Ukraine, finally agreeing to an urgent request from Ukrainian leaders desperate for more robust weapons to shoot down incoming Russian missiles that have crippled much of the country's vital infrastructure. An official announcement is expected soon.

Operating and maintaining a Patriot battery requires as many as 90 troops, and for months the U.S. has been reluctant to provide the complex system because sending American forces into Ukraine to operate the systems is a nonstarter for the administration of President Joe Biden.

Even without the presence of U.S. service members to train Ukrainians on use of the system, concerns remain that deployment of the missiles could provoke Russia or risk that a fired projectile could hit inside Russia and further escalate the conflict.

Before reports emerged on the delivery of Patriot systems, Dmitry Medvedev, deputy head of Russia’s Security Council, which is chaired by President Vladimir Putin, warned that if Patriots enter Ukraine "along with NATO personnel, they will immediately become a legitimate target for our armed forces."

RELATED: Kids facing the trauma of war in Ukraine comforted by dog therapy

Asked Wednesday whether the Kremlin backs that threat, Kremlin spokesman Dmitry Peskov answered yes, but added in a conference call with reporters that he would refrain from more detailed comment until the U.S. officially announces the Patriot delivery to Ukraine.

Ukraine has so far been cautious in reacting to the reports. Hanna Maliar, Ukraine’s deputy defense minister, told reporters Thursday in Kyiv that the delivery of such weaponry remains "sensitive not only for Ukraine, but for our partners," and that only President Volodymyr Zelenskyy or Defense Minister Oleksiy Reznikov would make any official announcement on such an agreement.

White House and Pentagon leaders have said consistently that providing Ukraine with additional air defenses is a priority, and Patriot missiles have been under consideration for some time. As the winter closed in and the Russian bombardment of civilian infrastructure escalated, official said, the idea became a higher priority.

RELATED: US sending $1 billion more in aid to Ukraine

Ukraine's electricity provider said Thursday that the country’s energy system had a "significant deficit of electricity," and that emergency shutdowns had been applied in some areas as temperatures hover around or below freezing.

The state-owned grid operator Ukrenergo warned in a statement on Facebook that damage caused to energy infrastructure by Russian attacks is being compounded by harsh weather, including snow, ice and strong winds.

Maximum temperatures in the capital were forecast to barely climb above freezing heading into the weekend, with even colder weather expected early next week.

The southern Ukrainian city of Kherson was left completely without power following Russian shelling on Thursday, according to Kyrylo Tymoshenko, deputy head of the Ukrainian president’s office, who wrote on Telegram. He added that two people were killed in the attacks.

RELATED: Barrage of Russian strikes hit Ukrainian cities, most of Kyiv without water

Heavy shelling of the city’s Korabelny district was still underway in the afternoon, and Russian shells hit 100 meters (yards) from the regional administration building, he said.

Amid the infrastructure attacks and power outages across the country, seven civilians were killed and 19 wounded on Wednesday and Thursday, according to a report issued by the Ukrainian president's office.

Kremlin-backed authorities in the region, which was illegally annexed by Moscow in September, announced that Russia had taken control of 80% of the city of Marinka, seen as critical to Ukrainian hopes of retaking the Russian-held regional capital, Donetsk.

The Moscow-installed mayor of Donetsk, Aleksei Kulemzin, said Thursday that the city center had been hit by "the most massive strike" since the area came under the control of Russian-backed separatists in 2014.

Writing on Telegram, Kulemzin said 40 Ukrainian rockets struck Donetsk on Thursday morning, noting that multistory residential buildings were hit and that fires broke out at a hospital and university campus.

In other developments Thursday:

— Russia continued to build up its military presence in Belarus, a senior Ukrainian military official said. According to Brig. Gen. Oleksiy Hromov, Russian units "are undergoing training and combat coordination" in Belarus, with the Kremlin using Belarusian officers and training grounds to improve the combat capability of existing units, as well as to train newly created units.

Speaking at a press briefing, Hromov said the probability of a Russian offensive from Belarus "remains low," but he highlighted that the transfer of Russian weapons to Belarus is ongoing, including three hypersonic missile-carrying aircraft, a set of tanks and a long-range radar-detection aircraft.

— Russia's Foreign Ministry says the Vatican has apologized for a statement Pope Francis made in a recent interview in which he singled out two Russian ethnic minorities — the Chechens and the Buryats — as being "the most cruel" participants in the war in Ukraine.

At a briefing on Thursday, Zakharova quoted from what she said was a message from the Vatican that "apologizes to the Russian side" for the pope's comments. Zakharova praised the message, saying that it showed the Vatican’s "ability to conduct dialogue and listen to interlocutors." A Vatican spokesman would say only that there had been diplomatic contacts on the matter.