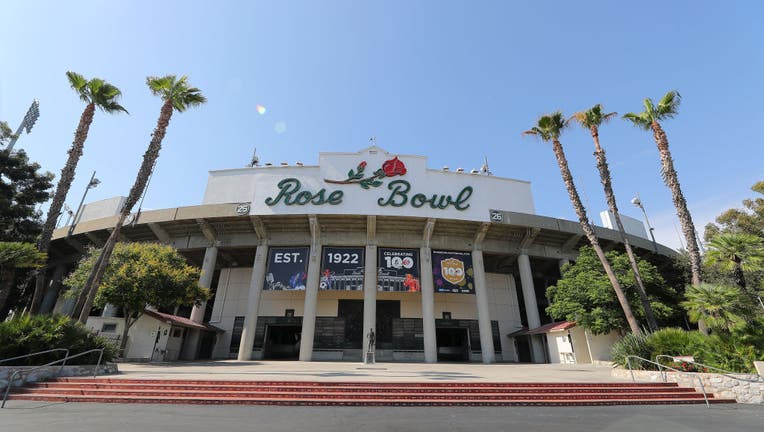 Outside view of the Rose Bowl in Pasadena. (Photo by Omar Vega/Getty Images)

Rose Bowl game organizers cleared the way for the College Football Playoff to expand to 12 teams starting in the 2024 season, informing CFP officials Wednesday they are willing to alter agreements to accommodate a new format to decide the national champion.

A person with knowledge of the discussions between game organizers and CFP officials told The Associated Press the Rose Bowl is prepared to be flexible and wants to continue to be part of the playoff beyond 2025.

"The City of Pasadena is thrilled that the Tournament of  Roses has reached an agreement with the College Football Playoff (CFP) that will ensure the Rose Bowl Game will be a part of the expanded CFP in 2024-25 and 2025-26 at the Rose Bowl Stadium on New Year’s Day," Pasadena city officials said in a statement.

They continued by saying, "The City and the Rose Bowl Operating Company will continue to support and partner with the Tournament to provide a world-class experience for the participating  teams, fans and global audience."

ESPN first reported the agreement between the Rose Bowl and the CFP.

An announcement from the CFP was expected by Thursday.

Eighteen months after a plan to expand the College Football Playoff from four teams to 12 was publicly unveiled, a process that was delayed and seemingly derailed numerous times is ready to cross the finish line.

An agreement with the 120-year-old bowl game held in Pasadena, California, and dubbed the Granddaddy of Them All was the last hurdle to clear.

The university leaders who make up the CFP board of managers were pushing for a decision from Rose Bowl officials by Wednesday about whether they would amend existing contracts for 2024 and ’25 and allow the playoff to triple in size.

The Rose Bowl is scheduled to have a traditional Pac-12-Big Ten matchup in those seasons. To have a 12-team playoff, the Rose Bowl would need to host a quarterfinal in its traditional and valuable Jan. 1 time slot.

Rose Bowl officials had asked the CFP to guarantee the game would remain on New Year’s Day, starting at 5 p.m. EST, in the new format for 2026 and beyond.

The original 12-year contract the CFP has with ESPN expires after the 2025-26 season. CFP officials have been unwilling to make any binding commitments about the College Football Playoff beyond 2025.

Expanding the College Football Playoff is expected to bring in an extra $450 million in gross revenue over the final two years of the current contract to the conferences and schools that participate.

The Rose Bowl is one of six bowls that currently rotate as hosts of the CFP semifinals every three years. The five other bowls — Fiesta, Sugar, Peach, Cotton and Orange — and host cities for the championship games scheduled to be held after the 2024 and ’25 seasons had already agreed to accommodate a new CFP format.

Two weeks ago, Rose Bowl organizers told The AP in a statement: "We have no intention of being the lone roadblock that would keep expansion from happening before the end of its current cycle."

Facing the possibility of being painted as an obstructionist and potentially being shut out of the expanded playoff when it would have been implemented in 2026, the Rose Bowl agreed to move forward on good faith.