LOS ANGELES - Marilyn Manson is being investigated by Los Angeles authorities for allegations of domestic violence after multiple women have come forward with disturbing claims against the rocker.

"The Los Angeles County Sheriff’s Department, Special Victims Bureau is investigating allegation(s) of domestic violence involving Mr. Brian Warner, also known as 'Marilyn Manson,' who works in the music industry. The incidents occurred between 2009 and 2011 when Mr. Warner lived in the city of West Hollywood," a spokesperson for the Los Angeles County Sheriff's Department said in a statement shared with Fox News.

The ongoing controversy resulted in Manson being dropped from his record label, Loma Vista Recordings. He was also removed from two television roles in Starz's "American Gods" and AMC's  "Creepshow."

An attorney for Manson did not immediately respond to Fox News' request for comment. Last month, Manson denied Wood's allegations. The actress, who was previously engaged to Manson in 2010, published her accusations on Instagram, alleging the rocker "brainwashed and manipulated" her during their relationship. Manson "started grooming me when I was a teenager and horrifically abused me for years," she wrote.

"I am done living in fear of retaliation, slander, or blackmail. I am here to expose this dangerous man and call out the many industries that have enabled him, before he ruins any more lives. I stand with the many victims who will no longer be silent," she continued. 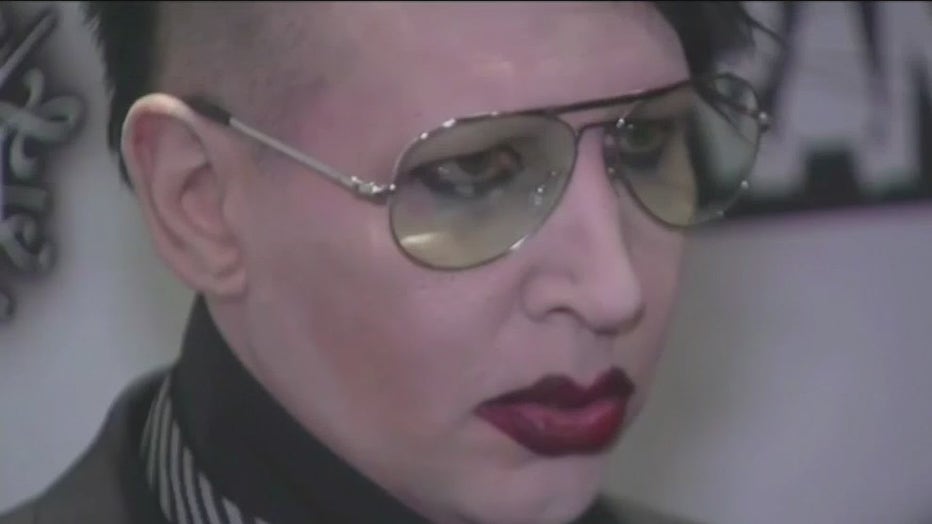 "The Beautiful People" musician released a denial on his own Instagram.

"Obviously, my art and my life have long been magnets for controversy, but these recent claims about me are horrible distortions of reality," he said. "My intimate relationships have always been entirely consensual with like-minded partners."

He concluded: "Regardless of how - and why - others are now choosing to misrepresent the past, that is the truth."

Four other women posted their own allegations shortly after Wood, claiming "sexual assault, psychological abuse, and/or various forms of coercion, violence, and intimidation.

In 2018, Wood testified before a House Judiciary Subcommittee as part of an effort to get the Sexual Assault Survivor’s Bill of Rights passed in all 50 states.

Also in 2018, a police report was filed against Manson for unspecific sex crimes dating back to 2011, The Hollywood Reporter revealed. However, the district attorney declined the case, citing that the statute of limitations had expired and an "absence of corroboration." Manson’s attorney, Howard E. King, Esq., also denied the claims to the outlet.

Additionally, creative artist Love Bailey claimed Manson once held a gun to her head in an interview with Fox News. Bailey claimed the incident took place while she styled a couture photoshoot at Manson’s home where an unidentified actress was also present.

As Manson allegedly placed a "glock straight to my forehead," Bailey claims the rocker said, "'I don’t like f------s’ as he laughs in this really dark, aggressive tone. This wasn’t a joke."

Bailey alleged that Manson did this after she attempted to assist the actress who was visibly "not coherent."

"She was stumbling over. She hurt her knee on the bedside table and Marilyn laughed at her and just let her crawl on the floor so I ran over to help," Bailey claimed.

Jenna Jameson, who previously was linked to Manson, called her past relationship with Manson "odd." She ended their fling after Manson allegedly voiced his desire to burn her body alive.

"We didn’t go out long because I cut it off after he would nonchalantly say he fantasized about burning me alive," the adult film star-turned-fitness maven, who is 46, told the Daily Mail.

"Sexually he liked to bite," she further claimed. She called this act "disconcerting."

Jameson noted that her experiences with Manson during their relationship were all consensual, the outlet said, but she did express that he is "a lot, to say the least."

Meanwhile, the artist's ex-wife Dita Von Teese spoke out about the claims. She stated that her "personal experience" with Manson was different. The former couple dated for six years before they tied the knot in 2005. Von Teese ultimately filed for divorce one year

"I have been processing the news that broke Monday regarding Marilyn Manson," Von Teese began, noting her gratitude for those that have expressed concerns for her "well-being."

"Please know that details made public do not match my personal experience during our 7 years as a couple," the performer explained. "Had they, I would not have married him in December 2005."

She went on to explain that after a year of marriage, she left the relationship "due to infidelity and drug use."

"Abuse of any kind has no place in any relationship," the dancer added. "I urge those of you who have incurred abuse to take steps to heal and the strength to fully realize yourself."

Manson is known as one of rock music's most eccentric figures because of his unique look and mysterious, spooky persona. He's been nominated for four Grammy awards in the metal categories.

Get updates from this story from FOX News.