She made the announcement in a video posted to Twitter on Thursday in which she endorsed Joe Biden for president.

"Today, I'm suspending my presidential campaign and offering my full support to Vice President Joe Biden in his quest to bring out country together," Gabbard said.

"Although I may not agree with the vice president on every issue, I know that he has a good heart and he's motivated by his love for our country and the American people," Gabbard said.

As debate qualifying thresholds became more difficult, Gabbard lost her place on stage. She never appeared in another debate after the fifth one on Nov. 20.

But in the first, second and fourth debates, she was the most searched Candidate on Google, Haaretz reported.

She often spoke of her military service during the debates. Gabbard has been a member of the Hawaii Army national Guard since 2003 where she has risen to the rank of Major.

The army deployed her for a 12-month tour in Iraq that began in July 2004.

But her most memorable debate moment came on July 31. Gabbard unloaded a blistering rebuke of Sen. Kamala Harris’ record as a prosecutor. 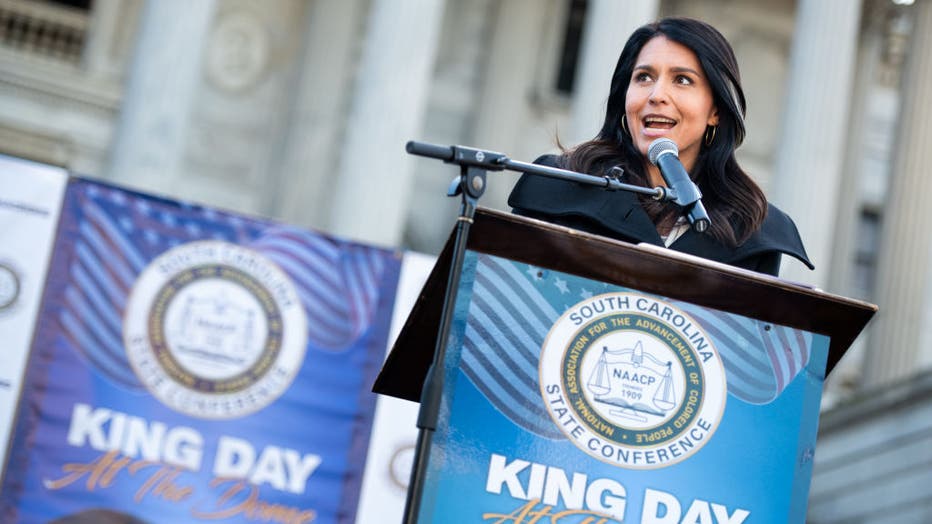 Rep. Tulsi Gabbard (D-HI) addresses the crowd during the King Day celebration at the Dome March and Rally on Jan. 20, 2020, in Columbia, South Carolina (Photo by Sean Rayford/Getty Images)

“I'm deeply concerned about this record. There are too many examples to cite but she put over 1,500 people in jail for marijuana violations and then laughed about it when she was asked if she ever smoked marijuana,“ Gabbard said.

"She blocked evidence that would have freed an innocent man from death row until the courts forced her to do so. She kept people in prison beyond their sentences to use them as cheap labor for the state of California,“ Gabbard added.

Harris fired back at the November debate with the very criticisms that had plagued Gabbard’s campaign since the beginning.

“It’s unfortunate that we have someone on this stage who is attempting to be the Democratic nominee for President of the United States who, during the Obama administration, spent four years full time on FOX News criticizing President Obama,” Harris said of Gabbard.

Harris said Gabbard “buddied up” to Steve Bannon so she could get a meeting with Donald Trump. Harris accused Gabbard of not being willing to call Syrian President Bashar al-Assad a war criminal.

Gabbard filed a lawsuit against Clinton in January for that remark, FOX News reported.

During Trump’s impeachment trial, Gabbard was the lone Democrat to vote “present,” saying she could not in good conscience vote yes or no.

Trump later praised her for the move.

"I give her respect. She didn't vote the other day. I give her a lot of respect. Because she knew it was wrong. She took a pass," he said.