Record numbers of children are being hospitalized with COVID-19, according to data collected by the U.S. Department of Health and Human Services.

Just over 1,900 pediatric hospitalizations due to COVID-19 were reported on Aug. 14. On Aug. 15, just over 1,800 children were hospitalized for COVID-19 according to HHS.

Both data sets include confirmed and suspected COVID-19 pediatric hospitalizations.

"As of Aug. 12, over 4.41 million children have tested positive for COVID-19 since the onset of the pandemic. Over 121,000 cases were added the past week, a continuing substantial increase. After declining in early summer, child cases have steadily increased since the beginning of July," according to the American Academy of Pediatrics. 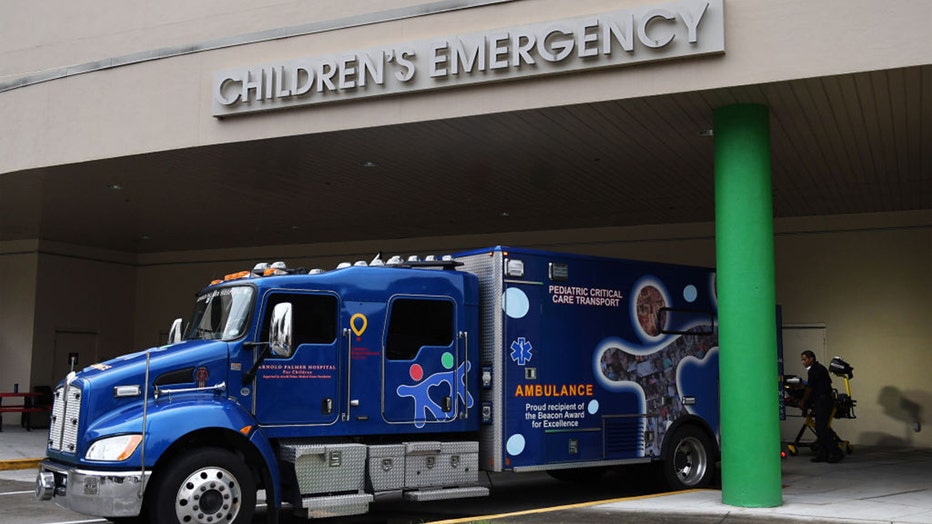 FILE - An ambulance is seen at the emergency entrance at Arnold Palmer Hospital for Children. (Paul Hennessy/SOPA Images/LightRocket via Getty Images)

Since the onset of the pandemic, children represented 14.4% of total cumulated cases. As of last week, children were 18.0% of reported weekly COVID-19 cases, the AAP said.

"Well over 80% of our new cases since July 1 in children and adolescents have been due to the delta variant. So we know it’s a highly contagious variant. And so we do expect to continue to see this upward trend in the number of cases during the coming days and weeks," Dr. Jim Versalovic, Texas Children’s Hospital pathologist-in-chief and interim pediatrician-in-chief, told the Texas Standard.

Children under 12 years old cannot currently receive a COVID-19 vaccine. Studies on the vaccines’ safety and effectiveness in younger children are still underway.

The United States is now averaging about 650 deaths a day, increasing more than 80% from two weeks ago and going past the 600 mark on Saturday for the first time in three months. In late July, the U.S. Centers for Disease Control and Prevention recommended indoor masks for all teachers, staff, students and visitors at schools nationwide, regardless of vaccination status.

Data on the age and demographics of victims during the delta surge is still limited, but hospitals in virus hotspots say they are clearly seeing more admissions and deaths among people under the age of 65.

One hospital in Texas is seeing a surge not just in COVID-19 cases, but RSV, or respiratory syncytial virus.

"The combination of RSV and Covid together has certainly proven to be very, very challenging, especially because that's where we'll see our younger kids who get Covid have trouble when they have both," said Dr. Seth Kaplan, president of the Texas Pediatric Society, in an interview with FOX 4 Dallas. "On that note, we're worried about what's coming later in the season when influenza makes its comeback."

RSV usually results in mild, cold-like symptoms and while most recover within two weeks, certain populations face a higher risk of severe illness, like infants and older adults, according to the CDC.

Most of the more serious cases are older, teenagers, and all unvaccinated. Dell Children’s Medical Center has not had any deaths in the pediatric unit due to COVID-19 but has noticed an increase in the severity of the illness.

The younger patients mark a shift from the elderly and frail, many living in nursing homes, who succumbed to the virus a year ago before states made seniors a priority to get inoculated first. More than 90% of seniors have had at least one shot, compared to about 70% for Americans under 65.

While the U.S. currently is seeing an average of about 129,000 new infections a day — a 700% increase from the beginning of July — that number could jump in the next couple weeks to 200,000, a level not seen since among the pandemic’s worst days in January and February, Dr. Francis Collins, director of the National Institute of Health, said.

Both he and Dr. Anthony Fauci stressed that the best way to stem the virus is for the unvaccinated to get their shots.

Currently, about 60% of the U.S. population has gotten at least one dose and nearly 51% are fully vaccinated, according to the CDC. Areas with low vaccination rates have been particularly hit hard with infections, such as Louisiana, Texas, Florida and Mississippi.

The rapidly escalating surge in infections across the U.S. has caused a shortage of intensive care-unit beds, nurses and other front-line staff in virus hot spots that can no longer keep up with the flood of unvaccinated patients. Health officials also warn that more children who are not yet eligible for vaccines could get infected, though it's not clear whether the delta variant leads to more severe illness among them.

"That’s heartbreaking considering we never thought we would be back in that space again," Collins said of rising U.S. infections overall. "But here we are with the delta variant, which is so contagious, and this heartbreaking situation where 90 million people are still unvaccinated who are sitting ducks for this virus, and that’s the mess we’re in. We’re in a world of hurt."