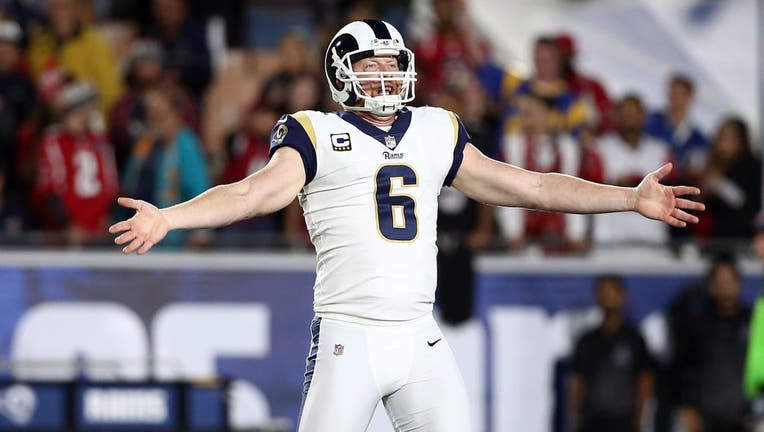 LOS ANGELES, CA - JANUARY 06: Johnny Hekker #6 of the Los Angeles Rams reacts after a 66 yard punt in the first quarter during the NFC Wild Card Playoff Game against the Atlanta Falcons at the Los Angeles Coliseum on January 6, 2018 in Los Angeles, C

Being placed on the Reserve/COVID-19 list is for a player who either tests positive for COVID-19 or has been in close contact with an infected person.

Teams are not allowed to comment on a player's medical status other than referring to roster status under a policy agreed to by the NFL Players Association, the union representing the league's players.

The transactions leave the Rams without a punter for Saturday's preseason game against the Las Vegas Raiders at SoFi Stadium. Brandon Wright was among two players waived Aug. 10 to allow the Rams to claim defensive back Tyler Hall and offensive tackle Ryan Pope off waivers.

Fans got a chance to check out the new SoFi Stadium on Saturday when the Los Angeles Rams and Los Angeles Chargers faced-off in their first preseason game of the NFL season.

Kicker Matt Gay could also handle punting duties against the Raiders. He averaged 50.1 yards on 10 punts for Orem (Utah) High School in 2011 but has not punted in a game since then.

The Rams signed Bojorquez as a free agent in April after he punted three seasons for the Buffalo Bills, averaging 45 yards per punt. Hekker averaged 45.6 yards per punt in 2020, the least of his nine seasons in the NFL. Hekker is a four-time Pro Bowl selection, most recently in 2017.