LOS ANGELES - Several fights broke out between dueling protesters at a demonstration over trans-rights outside a Koreatown spa Saturday morning.

Dueling demonstrations over trans rights were planned in Los Angeles, fueled by a viral video posted by a woman upset that a person who identified as female but has male genitalia was allowed to disrobe in the women's section of an upscale Koreatown spa.

A protest was scheduled by those opposed to the policy, but supporters of trans rights with the group SoCal Antifa showed up two hours earlier for a "No Bigotry in L.A.'' rally.

Videos from the scene show protesters fighting on the streets.

"Five people were injured -- three by assault and battery and two by assault with a deadly weapon,'' said Officer Mike Lopez of the Los Angeles Police Department. "There was no suspects descriptions and no arrests were made,'' he said.

Lopez added that he did not know which side of the demonstrations the injured people came from.

The protest is in response to an incident that occurred last weekend at Wi Spa at 2700 Wilshire Blvd. An irate customer posted the video on Instagram under the username Cubana Angel, and it quickly drew widespread exposure and support from many others on the site.

The woman can be heard complaining to a staff member at the counter of the establishment.

"So, it's OK for a man to go into the women's section, show his penis around the other women, young little girls -- underage -- in your spa? Wi Spa condones that, is that what you're saying?'' she asks. 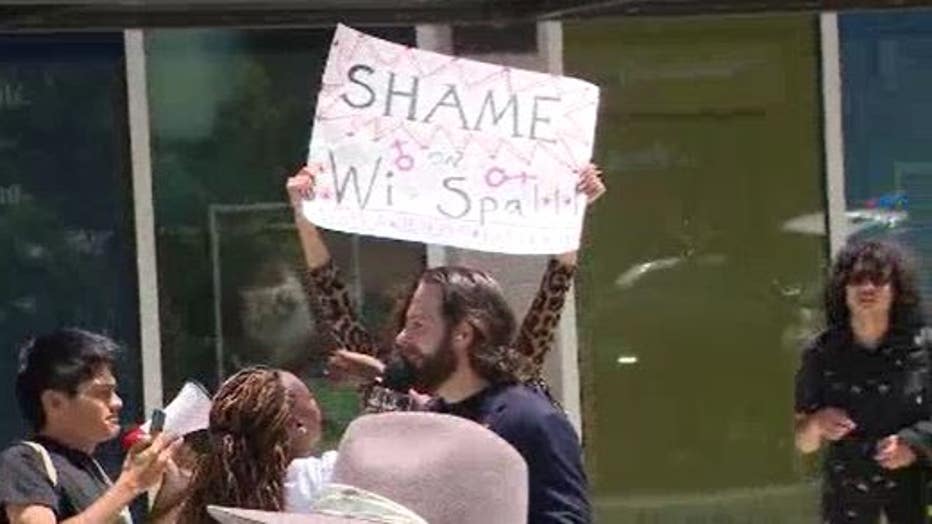 Another male customer attempts to defend the trans person, who is not seen in the video, but the woman isn't convinced. "He's a man. He is a man. He is not no female,'' she says. Another customer can also be heard complaining and asking for her money back.

Wi Spa defended its policy in a statement saying in part: "California law prohibits discrimination against transgender and gender non-conforming people in business establishments. As a spa located in Los Angeles, Wi Spa complies with California law prohibiting discrimination by a business, including the Civil Code provision set forth above. Like many other metropolitan areas, Los Angeles contains a transgender population, some of whom enjoy visiting a spa.  Wi Spa strives to meet the needs and safety of all of its customers, and does not tolerate harassment or lewd conduct by any customer, regardless of their sex, gender, or other characteristic."