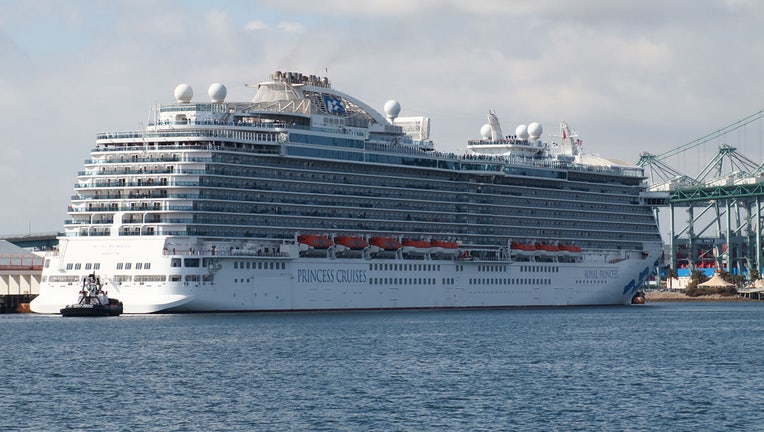 The Royal Princess ship, of the Princess Cruise line, is seen in the Port of Los Angeles World Cruise Center in San Pedro, California on April 20, 2019. (DANIEL SLIM/AFP via Getty Images)

LOS ANGELES - An elderly couple who tested positive for the coronavirus after traveling on a cruise ship now at the center of a criminal probe filed a negligence lawsuit against Princess Cruise Lines Thursday in federal court in Los Angeles.

David and Donna Rumrill were passengers aboard the Ruby Princess, which sailed out of Sydney, Australia, on March 8 and had to return three days early on March 19 as a result of an outbreak of acute respiratory infections, according to their complaint seeking at least $1 million in damages.

Australian police have announced a criminal investigation into the Ruby Princess, citing questions over whether ship operator Princess Cruises was transparent about sickened passengers and crew members.

The Santa Clarita-based company said in a statement to City News Service that it does not comment on pending litigation.

"Princess Cruises has been sensitive to the difficulties the COVID-19 outbreak has caused to our guests and crew," according to the company. "Our response throughout this process has focused on the well-being of our guests and crew within the parameters dictated to us by the government agencies involved and the evolving medical understanding of this new illness."

When the Ruby Princess docked in Sydney on March 19, nearly 2,700 passengers, including the Rumrills, were permitted to disembark, with some exhibiting flu-like symptoms. More than 340 passengers have since tested positive for the coronavirus and at least three have died, according to the New South Wales Ministry of Health.

Calls to the attorney for the Rumrills, who remain quarantined at home in Polk County, Florida, after testing positive for COVID-19, were not immediately returned.

According to the lawsuit, Princess Cruises, despite having experienced previous COVID-19 outbreaks on other ships, sailed the Ruby Princess and its other ships out of various ports of call "despite their knowledge of the significant risk of harm to their passengers and crew members."

"To add insult to injury, Princess was aware of an outbreak of COVID-19 on the March 8 sailing, and failed to even attempt to quarantine any of the passengers onboard," the lawsuit alleges. "They didn't even bother to notify the passengers that there was an actual outbreak, allowing the sailing to continue as if it were a normal cruise, up until the time it returned to Australia three days early."

The Rumrills allege that as a result of the company's alleged "lackadaisical" approach to safety, passengers and crew aboard the Ruby Princess contracted COVID-19.

"Princess chose to place profits over the safety of its passengers, crew and the general public in continuing to operate business as usual, despite their knowledge of the actual risk of injury to plaintiffs, who are elderly," the suit alleges. "As a direct and proximate result of the aforementioned negligence ... plaintiffs are suffering from emotional distress, as they remain quarantined in their homes, hoping for a recovery."