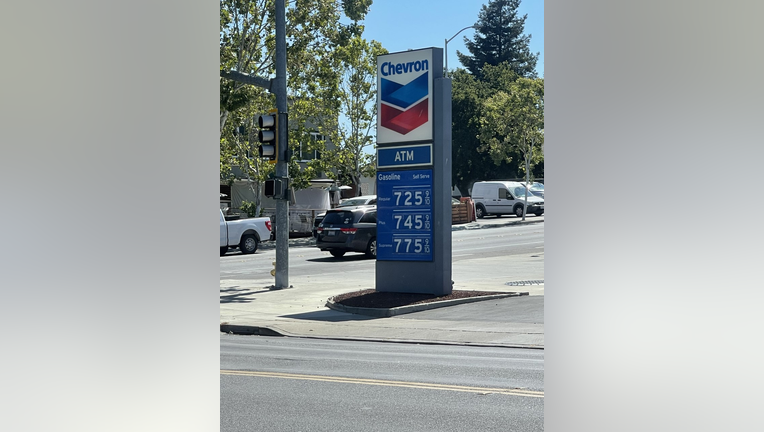 At the Chevron on Alameda de las Pulgas in Menlo Park, a gallon of regular unleaded hit $7.25 on Tuesday, May 24, 2022. (Photo credit: Miguel Flores from Menlo Park Barber)

MENLO PARK, Calif. - Motorists may be feeling there’s no end in sight to the rising prices at the pump, as gas prices continued to break records.

This, as one Bay Area gas station was getting a lot of attention for the sticker shock it’s causing.

In Menlo Park, the Chevron on Alameda de las Pulgas hit $7.25 a gallon for regular unleaded and $7.75 for premium on Tuesday.

It was down a few cents from the previous day.

In the Bay Area and across the country, gas prices continued to soar to record highs, ahead of Memorial Day, the unofficial kick-off to the summer driving season when prices at the pump typically rise.

For the first time ever, the average for a gallon of regular unleaded topped $4 in all 50 states. The national average stood at $4.59 a gallon, the highest ever recorded, according to the American Automobile Association (AAA).

Compare that with the statewide average of $6.06, also a record high.

And as most Bay Area motorists were well aware, prices in this region tend to be even higher.

Here’s a snapshot of the average price for a gallon of regular unleaded across the Bay Area:

"Gasoline is $1.05 more than it was on February 24, when Russia invaded Ukraine," said Andrew Gross, AAA spokesperson. "That sent shock waves through the oil market that have kept oil costs elevated."

The agency noted that there were some steps motorists could take to help save fuel and money.