WASHINGTON - President-elect Joe Biden will enter the White House facing a deeply polarized country amid a global pandemic and its economic fallout.

Biden has made a lengthy list of priorities for the first 100 days of his presidency, though the coronavirus will likely rank highest. Days after he was projected as the winner of the presidential race, he and Vice President-elect Kamala Harris announced a COVID-19 advisory board to help spearhead the incoming administration’s pandemic response.

The U.S. topped 10 million total coronavirus cases with more than 240,000 related deaths amid record new daily cases in states across the country, according to data compiled Nov. 11 by Johns Hopkins University. Health officials have warned that those grim figures are likely to increase with the holidays approaching and many Americans stuck indoors during the colder months.

In addition to the COVID-19 pandemic, Biden and Harris’ other main goals starting on day one are highlighted on a new transition website: economic recovery, racial equity and climate change.

Biden unveiled a detailed, highly ambitious plan on immigration as well, but it will take time to undo many actions taken by the Trump administration. And the president-elect will likely face a divided Congress — forcing Biden to curtail some of his ambitions. 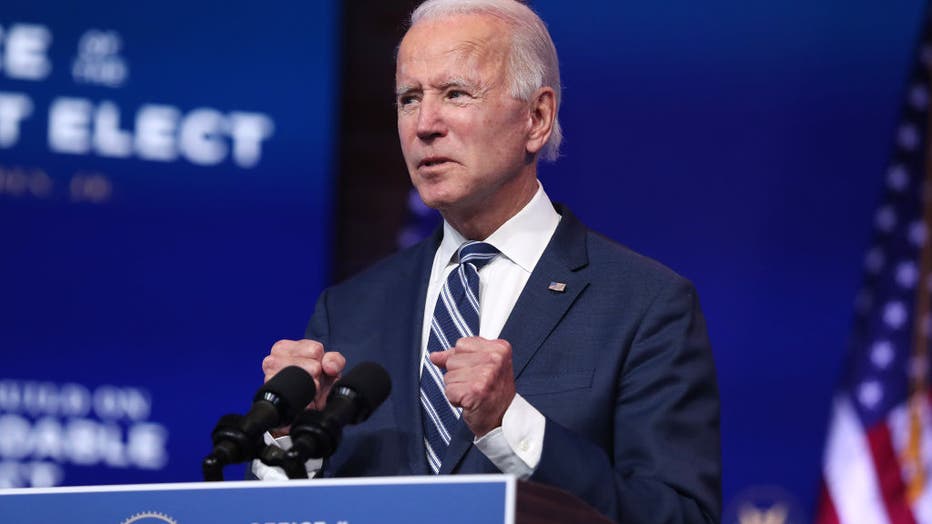 President-elect Joe Biden addresses the media about the Trump Administration’s lawsuit to overturn the Affordable Care Act on Nov. 10, 2020 at the Queen Theater in Wilmington, Delaware. (Photo by Joe Raedle/Getty Images)

Here’s what to expect in Biden’s first 100 days:

The president-elect has called on Americans to separate politics from the virus and embrace mask-wearing.

“We could save tens of thousands of lives if everyone would just wear a mask for the next few months. Not Democratic or Republican lives, American lives,” Biden said Nov. 9. “Please, I implore you, wear a mask.”

Biden said last month that he will “go to every governor and urge them to mandate mask-wearing in their states.”

“And if they refuse, I'll go to the mayors and county executives and get local masking requirements in place nationwide,” he added.

Biden has said he will begin on day one to implement “an effective distribution plan” for a potential coronavirus vaccine. According to their transition website, the Biden administration plans to invest $25 billion in vaccine manufacturing and distribution “that will guarantee it gets to every American, cost-free.”

The president-elect said he will look to “restore our leadership on the world stage” by rejoining the World Health Organization on his first day in office. Trump pulled out of the global body over the summer.

In addition to his COVID-19 advisory board, Biden said he plans to “immediately” ask Dr. Anthony Fauci, the nation’s top infectious disease expert, to continue his “incredible service to our country.” Fauci has served as director of the National Institute of Allergy and Infectious Diseases since 1984.

Earlier this month, Trump suggested at a campaign rally that he would fire Fauci.

The president-elect has proposed nearly $5.4 trillion in new spending over the next decade, according to the University of Pennsylvania's Penn Wharton Budget Model. That includes $1.9 trillion on education and $1.6 trillion on new infrastructure — roads, bridges, highways and other public structures — and research and development.

The president-elect has also said he would raise $3.4 trillion in additional tax revenue over a decade to help pay for it, Penn Wharton found.

On day one, Biden has pledged to raise corporate income taxes to 28% from 21%, reversing half of Trump's cut from 35% in 2017. As part of Biden’s larger tax plan, he would also raise income and payroll taxes for people making $400,000 a year or more — which is about 2% of the population.

Most economists, along with Federal Reserve Chair Jerome Powell, are warning that the economy needs more rescue aid from Congress.

The $2 trillion aid package that Congress approved in March is widely credited with fueling a sharp economic rebound this summer. But that stimulus is largely exhausted. Without additional aid, the hardships for roughly 10 million jobless Americans and thousands of struggling small businesses will deepen, along with the economy.

Biden’s election victory makes another shot of stimulus spending more likely, though probably not until after his inauguration on Jan. 20. A package of $1 trillion to $1.5 trillion would add as much as 4.5% to growth next year, according to Capital Economics. That would be enough to return the economy to its pre-pandemic level by the end of 2021. Most economists note that the economy's painfully sluggish recovery from the 2008-2009 Great Recession was due in large part to government spending limits that took effect in 2010.

“The most important economic issue today, tomorrow and into the next several years is fiscal policy,” said Eric Winograd, U.S. economist at Alliance Bernstein, referring to the government’s tax and spending policies. “With monetary policy (by the Fed) largely bled dry, fiscal policy is the only game in town.”

Biden will take office in January as the nation confronts a series of crises that have taken a disproportionate toll on Black Americans and people of color, including the pandemic and resulting job losses. Many cities saw protests against racial injustice during a summer of unrest.

Black voters powered Biden’s successful campaign, particularly in critical states like Michigan, Wisconsin and Georgia. Nine in 10 Black voters nationwide supported him, according to AP VoteCast, an expansive survey of more than 110,000 voters across the country.

“That is why racial equity is a distinct pillar of the Build Back Better plan. President-elect Biden is removing barriers to participation in our economy, expanding access to opportunity, and fully enforcing the policies and laws that we already have on the books,” Biden and Harris’ transition website states.

The Biden-Harris administration has pledged to work with the deeply divided Congress to pass police reform legislation, including a nationwide ban on chokeholds and creating a national police oversight commission.

Biden has a lengthy climate plan, which includes a promise to rejoin the Paris Climate Agreement on day one. Trump withdrew the U.S. from the agreement, citing “draconian financial and economic burdens the agreement imposes on our country.”

Other items promised within Biden’s first 100 days include convening a climate world summit with major carbon-emitting countries and persuade them to strengthen their climate pledges.

He has also pledged to “lock in enforceable international agreements” to reduce emissions in global shipping and aviation.

Some dramatic moves on immigration are expected in the early days of the Biden administration. Biden will likely use executive orders to undo some of Trump’s signature immigration initiatives.

The roughly 400 miles of border wall built so far won’t come down, but the new administration won’t keep building it or taking money from the Pentagon to fund it.

The incoming administration also plans to reinstate the Deferred Action for Childhood Arrivals program (DACA), which currently shields from deportation about 650,000 people who came to the country when they were young. He plans to overturn the travel ban on people visiting the United States from 13 countries, many of them Muslim-majority.

One of Trump’s first moves in office was to tell immigration officials that everyone in the country illegally was subject to deportation. Biden is expected to return to criteria similar to what Obama adopted toward the end of his tenure, largely limiting deportations to people with serious criminal records in the U.S.

Biden said he wants the government to help find the families of hundreds of children who were separated from their parents at the border early in the Trump administration. The president-elect also wants to get rid of policies that have been “detrimental” to seeking asylum — such as the policy to make asylum-seekers wait in Mexico for hearings in U.S. immigration court — but he is expected to move cautiously to avoid triggering more arrivals.

As president, Biden will find Congress a lot different than he left it

Democrats' poor performance in down-ballot races of the 2020 election could leave them without control of Congress, making it a lot more difficult for Biden to pursue his legislative agenda.

The dynamic will leave Biden with little choice but to try to govern from the vanishing middle of a Washington that's become deeply divided.

“There is a certain opportunity for bipartisanship, but it is all going to be deals in the middle,” said Rohit Kumar, a former aide to Senate Majority Leader Mitch McConnell, R-Ky. “What I don’t know is whether the (Democratic and Republican) parties will allow them to do that because the parties have gotten a lot more polarized.”

The journey to president-elect was a long and winding road for the former vice president.

While it is not settled, Biden faces a high likelihood of becoming the first Democrat in modern history to assume office without his party controlling Congress. Republicans are favored to retain control of the Senate heading into two runoff elections in Georgia in January. Democrats have already won the House.

GOP control of the Senate would force Biden to curtail his ambitions, all but guaranteeing that big issues like climate change, immigration and expanding “Obamacare” remain in limbo.

But it would also create space for a different kind of legislative agenda — one founded on bipartisanship and consensus that would seem to play to Biden's strengths. And some lawmakers say voters made clear in the election that governance from the middle is exactly what they want.

Among them is Sen. Susan Collins, R-Maine, who emerged from a brutal reelection campaign empowered to pursue a brand of pragmatic centrism that was once common among lawmakers but is now quite rare.

“I have seen, based on the number of phone calls that I have received from both the Democratic senators and Republican colleagues, a real interest in trying to expand the center and work together to confront some of the challenges facing our nation,” Collins said. “And I’m encouraged by that.”

McConnell is an old friend of Biden's, and as vice president, Biden worked successfully with the Kentucky Republican to avert several tax- and budget-related crises during the Obama administration, including a tax increase on higher-income earners in exchange for renewing most of the 2001 Bush tax cuts.

“That's when they had to get together and get things done. I don't know that there's a great deal of history of proactively coming together on big policy issues,” Buck added.