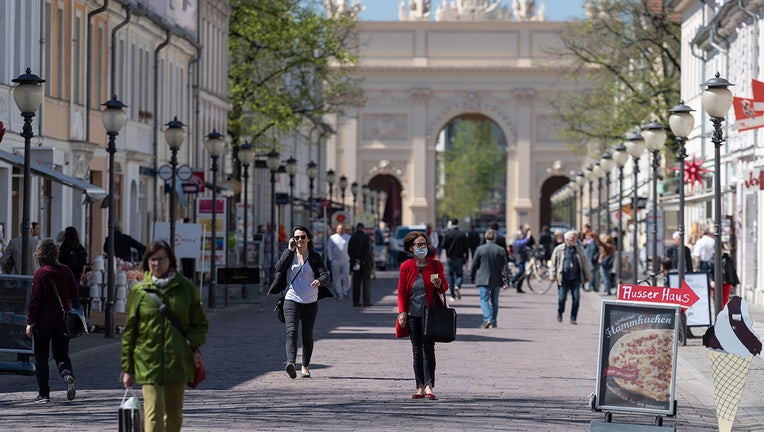 22 April 2020, Brandenburg, Potsdam: A woman with a face mask and shopping bag is walking on the shopping mile Brandenburger Straße coming from the direction of the Brandenburg Gate. Smaller shops can reopen in Brandenburg, shops up to 800 square met (Soeren Stache/picture alliance via Getty Images)

BERLIN - Derided by many economists for years for insisting on a balanced budget and criticized for a health care system seen as bloated and overly expensive, Germany has found itself well equipped now to weather the coronavirus pandemic.

Already applauded for early actions such as social-distancing regulations and aggressive testing seen as helping keep the death toll comparatively low, Europe’s largest economy has had the financial flexibility to launch a massive rescue plan to help businesses and keep workers paid.

As the country moves to relax some restrictions this week, Chancellor Angela Merkel is pointing to the example of South Korea, which relied on its experience fighting a different coronavirus five years ago to combat COVID-19, as the way forward.

Meantime in the U.S., some protesters have taken to the streets — supported by President Donald Trump’s tweets — to demand an end to virus-related shutdowns to help the faltering economy, which has caused tens of millions to lose their jobs, even if it could lead to an increase in deaths as the health care system struggles.

“This is a crisis which, on the one hand, has probably hit the U.S. where it is most vulnerable, namely health care,” said Carsten Brzeski, ING bank’s chief Eurozone economist. “While at the same time it has hit the German economy where it’s the strongest.”

Brzeski was among those who argued for Germany to spend more to stimulate the economy as growth ground toward stagnation, but concedes now the country is in a fortunate position.

For years, balanced budget proponents argued it was prudent during good economic times to bring Germany’s house in order to be prepared for a crisis. So in announcing a 1 trillion euro ($1.1 trillion) rescue plan for the country’s 83 million people last month, Finance Minister Olaf Scholz was able to assure there was more money available, if needed.

And while Italy and Spain were faced at the height of the crisis with having to decide whether to allocate precious ICU beds to elderly patients with the most urgent need or to younger patients with the greatest chance of survival, Germany has never had a shortage and has even taken in patients from other European countries.

“They had the means, but then they also had the political will, and also the very good analytical insights to use the means,” Brzeski, said, noting Merkel was a scientist before entering politics.

“I can’t imagine any government better than Angela Merkel’s to deal with this.”

Germany is now taking baby steps to ease restrictions, allowing smaller shops to reopen this week while sticking to strict social-distancing guidelines and requiring face masks on public transport and in stores. The effect will be analyzed after two weeks to see whether infections have again started to significantly climb.

“We must not overwhelm our health care system,” Merkel said, warning restrictions could be snapped back. “The best path is one that is careful, and not taken light-heartedly.”

The far-right Alternative for Germany party has criticized Merkel’s go-slow approach as “ruining our country,” but the chancellor’s popularity has been steadily rising and Germans overwhelmingly see her government’s crisis management positively.

Opening her Berlin toy store Wednesday for the first time in over a month, Galina Hooge said she had already received government aid and the process was “surprisingly quick and uncomplicated.”

She said it only covered the store’s rent and bills, but she felt relatively secure thanks to Germany’s universal health insurance and strong social safety net.

“The main thing is that everyone stays healthy and the situation doesn’t become like America,” she said, referring to the large number of cases and deaths in the United States.

Besides help for small businesses, Germany’s aid package is designed to keep the unemployment rate down and allow workers to return quickly when possible. While Washington is sending out one-time stimulus checks to Americans, the German government plan pays at least 60% of the salary of employees who are on reduced or no hours. 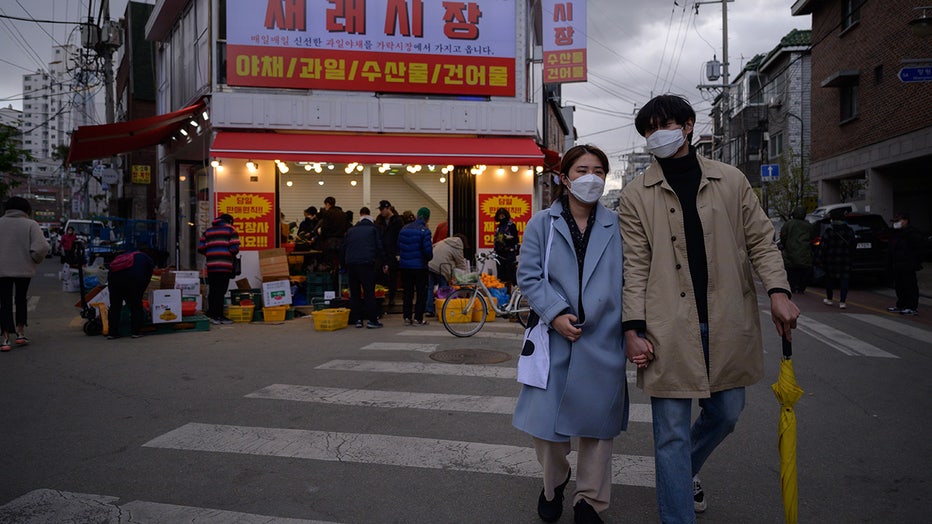 A couple wearing face masks amid concerns over the COVID-19 novel coronavirus walks through a market in Seoul on April 22, 2020. (ED JONES/AFP via Getty Images)

As restrictions are eased, Merkel has pointed to South Korea as an example of how Germany will have to improve measures to “get ahead” of the pandemic with more testing and tracking of cases to slow the infection rate.

Experts say one reason South Korea has managed to avoid lockdowns or business bans was because of its aggressive testing and contact-tracing program that draws from its experience of fighting a different coronavirus — MERS or Middle East Respiratory Syndrome -- in 2015.

Following that outbreak, which killed 36 people and sickened around 200, South Korea rewrote its infectious disease law to allow health authorities quick access to a broad range of personal information to fight infectious diseases.

Amid criticism from privacy advocates, authorities have fully exercised such powers during the COVID-19 pandemic, aggressively tracing virus carriers’ contacts with tools such as smartphone GPS tracking, credit card records and surveillance video. People’s movements before they were diagnosed are published on websites and relayed via smartphone alerts to inform others whether they have crossed paths with a carrier.

The government is also using smartphone tracking apps to monitor the tens of thousands of people placed under self-quarantine at home and plans to use electronic wristbands on people who defy quarantine orders.

South Korea on Wednesday reported 11 new cases of the coronavirus, the 21st day in a row that the daily jump in infections came below 100.

The approach has meant South Korea has managed to slow the spread of the virus without imposing massive lockdowns or banning nonessential businesses, so there has never been any debate over “reopening” its economy.

In the U.S., there has been growing impatience over virus-related shutdowns that have led tens of millions to lose their jobs, and the U.S. Senate on Tuesday approved nearly $500 billion in new aid for businesses, hospitals and testing, on top of a $2.2 trillion package passed last month in the country of some 328 million.

Trump’s administration has issued guidelines advising relaxation of restrictions only after prerequisites, like a two-week downward trajectory of cases, are met. Trump himself, however, has grumbled “our country wasn’t meant to be shut down” and has tweeted support for anti-shutdown protests, and some states are moving ahead with plans to begin reopening as early as this week.

The U.S. has registered more than 825,000 infections and 45,000 deaths so far, including some 15,000 fatalities in New York City alone. Often at odds with Trump, New York Gov. Andrew Cuomo has warned against relaxing restrictions too early and risking a new spike in infections, no matter how badly the economy is faring.

At the height of the crisis in Spain and Italy the sheer numbers overwhelmed their health care systems, and painful decisions had to be made on who to treat.

Domenico Arcuri, Italy’s extraordinary commissioner for the COVID-19 crisis, told reporters Tuesday that for the first time during the pandemic the nation now has more respirators than patients in ICU beds, and lamented the “anguish” officials faced deciding who to treat in the early weeks.

“Each night, we had to decide where to send these instruments, which, in the end, save lives,” he said. “I’ll keep that with me for all my life, and I wouldn’t wish anyone else to experience” the dilemma of choosing which hospital received them.

With the numbers of new infections now stabilizing, Italian Premier Giuseppe Conte confirmed Tuesday that Italy can start reopening on May 4, but he doused any hopes of a total loosening of some of the strictest lockdown measures in a Western democracy.

Spain, which has turned hotels into makeshift hospitals and converted a Madrid skating rink into a morgue, has not yet announced plans on relaxing restrictions, with Health Minister Salvador Illa saying it will hinge on advances made in treatment and vaccines to “ensure there’s no second wave.”

Spain is “still in a difficult place, with some hard weeks ahead,” he said Tuesday.

In announcing a tentative easing of restrictions in the Netherlands, allowing elementary schools to reopen with reduced class sizes starting May 11, Prime Minister Mark Rutte said he had faced “devil’s dilemmas” in trying to decide how to move forward.

The Netherlands was projected to have a budget surplus of 3.4 billion euros in 2020, however, and Rutte said the government could afford to take a cautious approach as he ordered bars and restaurants to remain closed until at least May 19.

“Thanks to the government’s good financial position, it can offer first aid to companies, independent business owners and affected sectors,” his government said.