A 23-year-old pregnant woman and her unborn child were killed while riding in a pickup with a driver accused of being intoxicated.

LONG BEACH, Calif. - A 23-year-old pregnant woman and her unborn child were killed while riding in a pickup with an allegedly intoxicated boyfriend who crashed into two cars while chasing another vehicle at high speeds through Long Beach in a road rage incident.

The crash was reported about 11:35 a.m. Saturday at Long Beach Boulevard and 52nd Street, according to the Long Beach Police Department.

Detectives learned 26-year-old Miguel Larios of Long Beach had his pregnant girlfriend and a child as passengers as he sped southbound on Long Beach Boulevard, chasing a motorist who was trying to get away.

There were no details immediately available about that motorist nor what prompted Larios to pursue the vehicle.

As Larios continued the pursuit, a 45-year-old Long Beach man pulled his 2004 Toyota Corolla away from a curb south of Mountain View Street and collided with the pickup, causing Larios to lose control of the vehicle and strike an unoccupied parked car just north of 52nd Street, police said.

Larios and his passengers were taken to a hospital, where the 8-months pregnant woman and her unborn child died, police said. The boy remained in the hospital with what were described as non-life-threatening injuries.

Family identified the woman as Krista Nichols and her unborn baby as Christopher. 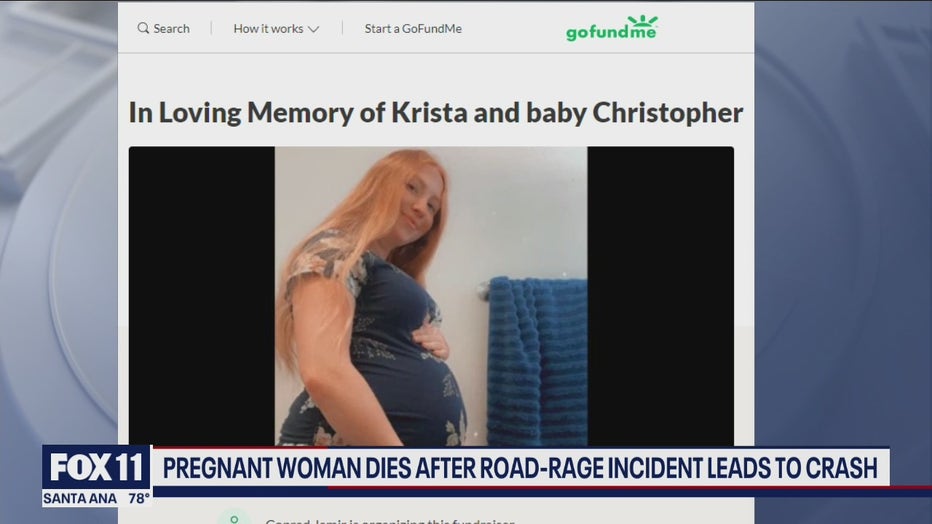 On Monday, FOX 11 obtained videos from a witness that showed the moment the cars crashed into each other.

FOX 11 obtained video of the road rage crash that killed a pregnant woman and her unborn child.

A GoFundMe has been set up for Krista and her child.

Larios was treated for his injuries, arrested and booked for suspicion of two counts of gross vehicular manslaughter while intoxicated, one count of driving under the influence, and one count of child endangerment, police said. Bail was set at $200,000.

Anyone with information was asked to call Collision Investigation Detail Detective Joseph Johnson or Kelsey Myers at 562-570-7355 or Crime Stoppers at 800-222-TIPS (8477).