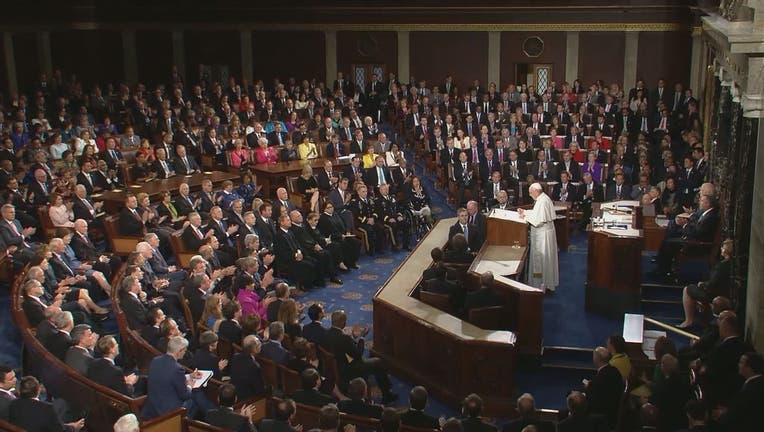 WASHINGTON - (AP) -- Standing before a rapt Congress, Pope Francis issued a ringing call to action on behalf of immigrants Thursday, urging lawmakers to embrace "the stranger in our midst" as he became the first pontiff in history to address a joint meeting at the U.S. Capitol.

Referencing the migration crisis in Europe as well as the United States' own struggle with immigration from Latin America, Francis summoned lawmakers "to respond in a way which is always humane, just and fraternal."

"We must not be taken aback by their numbers but rather view them as persons, seeing their faces and listening to their stories, trying to respond as best as we can to their situation," Francis urged.

He was welcomed enthusiastically to a House chamber packed with Supreme Court justices, Cabinet officials, and lawmakers of both parties, uniting the bickering factions as all stood to cheer his arrival. The sergeant at arms intoned "Mr. Speaker, the pope of the Holy See," and Francis made his way up the center aisle in his white robes, moving slowly as lawmakers applauded, some inclining their heads in bows.

After the speech, he appeared on a Capitol balcony and briefly addressed a cheering crowd of thousands below on the lawn and the Mall beyond. "Buenos dias," he called out, and the crowd thundered its response.

Francis asked the crowd to pray for him, as he always does. Speaking in Spanish, he added a line to acknowledge that not everyone there was a believer. "If among you there are some who don't believe or who cannot pray, I ask that you send good wishes my way," he said, to tumultuous applause.

"God bless America!" he concluded, as he had in the House chamber.

From the Capitol where he challenged Washington's elites Francis traveled to comfort some of the city's neediest. He spoke to homeless people at St. Patrick Parish and pressed into a crowd at Catholic Charities, where people surrounded him and took selfies after he offered a blessing before their lunch.

He called on the faithful to solve homelessness, declaring: "Let me be clear: There can be no social or moral justification, no justification whatsoever, for lack of housing."

After Washington the pope was heading to New York for more prayer services and a speech to the United Nations. He left the Vatican residence late in the day and stepped into his small Fiat for the trip to Andrews Air Force Base, pausing for a final round of greetings with clamoring children crowded outside.

The pope's hectic three-day visit to Washington was the first stop on a three-city U.S. tour that winds up in Philadelphia.

On Wednesday he was cheered by jubilant crowds as he visited the White House -- where he and President Barack Obama embraced each other's warnings on climate change -- paraded through Washington streets in his "popemobile," addressed U.S. bishops, noting the clergy sex abuse scandal, and celebrated a Mass of Canonization for Junipero Serra, the Spanish friar who founded major California missions.

Introducing himself at the Capitol as "a son of this great continent," the Argentine pope, reading his remarks slowly in English, spoke from the same dais where presidents deliver their State of the Union speeches. Behind him sat Vice President Joe Biden and House Speaker John Boehner, the first and second in line to the presidency, both Catholics. Outside, tens of thousands watched on giant screens, and many more were watching on TV around the world.

Lawmakers of all political backgrounds and religious affiliations eagerly welcomed the pope, pledging to pause from the bickering and dysfunction that normally divide them and hear him out. Yet Francis spoke to a Congress that has deadlocked on immigration legislation, at a time when there are more than 11 million people in the U.S. illegally, and where some lawmakers have balked at Obama administration plans to accept more of the migrants from Syria and elsewhere who are now flooding Europe.

Indeed, Francis arrived at a moment of particular turmoil for Congress, with a partial government shutdown looming next week unless lawmakers can resolve a dispute over funding for Planned Parenthood related to the group's practices providing fetal tissue for research.

Francis steered clear of such controversies, alluding only in passing to the Catholic Church's opposition to abortion when he noted, to applause, "our responsibility to protect and defend human life at every stage of its development."

He advocated abolition of the death penalty, something that enjoys support from a number of lawmakers of both parties at the federal level, and spoke out against fundamentalism of all kinds, while urging care in combating it.

"A delicate balance is required to combat violence perpetrated in the name of a religion, an ideology or an economic system, while also safeguarding religious freedom, intellectual freedom and individual freedoms," Francis said.

On immigration, Francis urged lawmakers -- and the United States as a whole -- not to be afraid of migrants but to welcome them as fellow human beings, not things that can be discarded just because they are troublesome.

Francis, the son of Italian immigrants to Argentina, recalled that America itself was founded by immigrants, that many lawmakers are descended from foreigners and that that new generations must not "turn their back on our neighbors."

Given an ovation when he spoke of the Golden Rule, he said, "Let us treat others with the same passion and compassion with which we want to be treated."

He reiterated his stance on climate change, "the environmental deterioration caused by human activity."

Yet in calling for action on the climate and to combat poverty, Francis took care to insist he was not anti-business, as some conservatives have suggested. He quoted a Catholic teaching document calling business "a noble vocation, directed to producing wealth and improving the world."

Many lawmakers had vowed to preserve decorum throughout the speech and members of both parties listened intently, yet they did not completely contain their reactions. The mention of climate change drew standing cheers from Democrats while Republicans stood to applaud the reference to abortion. One Democratic House member let out a whoop of delight at the pope's call to abolish the death penalty.

Republicans in particular also loudly applauded as Francis asserted the importance of family life and bemoaned that "fundamental relationships are being called into question as is the very basis of marriage and the family." The Catholic Church opposes gay marriage, recently legalized by the Supreme Court.

Francis also criticized the arms trade, significant before Congress because the United States is the world's largest exporter of weapons.

On Thursday, security was tight outside the Capitol, with streets blocked off and a heavy police presence that rivaled an Inauguration or State of the Union address by the U.S. president. The scene on the West Lawn was festive but orderly.

Francis, 78, enjoys approval ratings the envy of any U.S. politician as he's remade the image of the Catholic Church toward openness and compassion, yet without changing fundamental church doctrine. Addressing a chamber full of elected officials, he may have been the most adept politician in the room.