A spokesman for the Federal Aviation Administration said preliminary information showed it was a twin-engine Cessna 421 that crashed in the residential area after departing from the Monterey Regional Airport around 10:40 a.m.

Flight-tracking websites showed that the plane took off to the east and made a looping right turn before crashing into the home on Monterra Ranch Road. 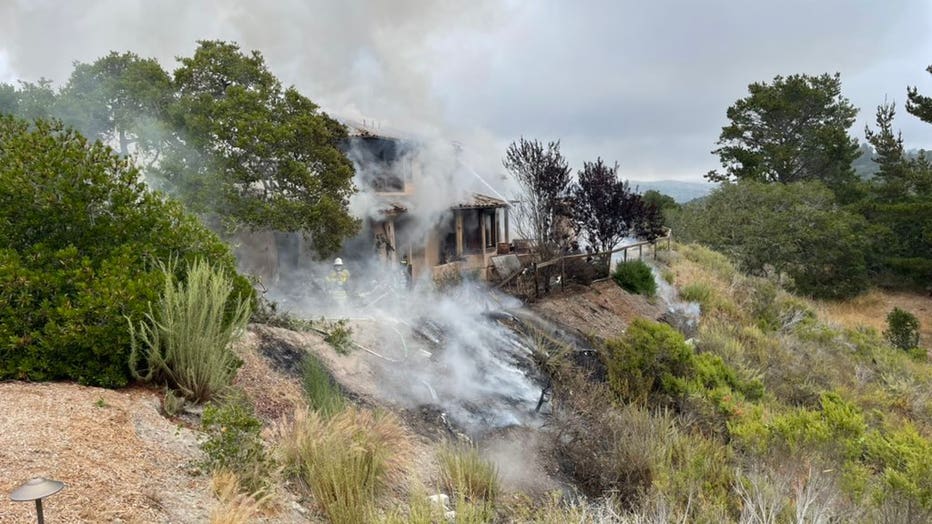 Emergency crews on scene of a plane that's gone down into a home Monterey County.

A photo posted on Twitter showed heavy smoke coming from the structure. which was heavily damaged. Fire officials said four engines battled the house fire and additional crews were called in to put out spot fires in the immediate area.

"Some of the debris from the crash had spread to other parts of the property, starting some spot fires," Priolo said.

At around 12:45 p.m. Cal Fire had brought the wildland fire under control. In all, the flames scorched about one eighth of an acre, according to Deputy Fire Marshal Dorothy Priolo of the county fire agency.

Officials said there were no reports of any injuries on the ground, despite widespread damage from the fire, which consumed 60 percent of the home, Priolo said.

Investigators were trying to determine how many people were on the plane.

Few details about potential victims were available as of Tuesday afternoon.

"We do not yet have information about the number of people on board. We do not have any immediate reports of injuries to people on the ground," FAA Public Affairs Specialist Donnell Evans told KTVU in an email, adding both his agency as well as the National Transportation Safety Board will be investigating the crash.

"The NTSB will be in charge of the investigation and will provide additional updates," Evans said.

County fire officials said that in addition to Cal Fire, the Monterey and Seaside fire departments also responded to the scene.