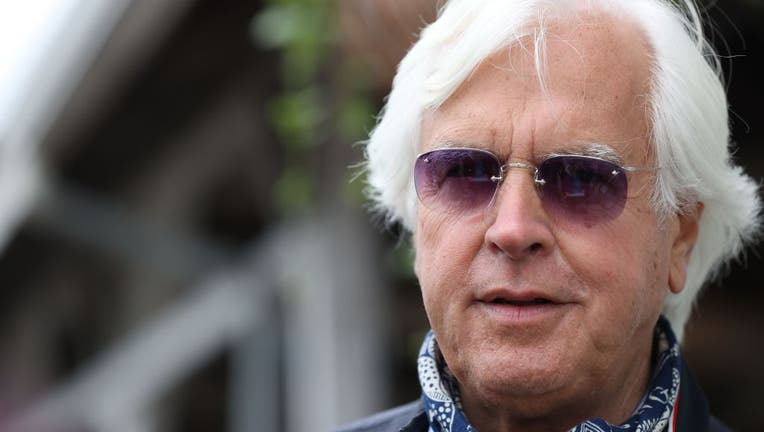 LOUISVILLE, KENTUCKY - APRIL 29: Bob Baffert the trainer of Medina Spirit talks to the media during the training for the Kentucky Derby at Churchill Downs on April 29, 2021 in Louisville, Kentucky. (Photo by Andy Lyons/Getty Images)

"The California Horse Racing Board will honor any suspension given by another regulatory body, provided that regulator followed procedures for due process. At this time the CHRB is unaware of any such suspension,'' Mike Marten, public information officer for the CHRB, told City News Service on Saturday.

"The decisions by Churchill Downs and the New York Racing Association to not allow Bob Baffert to run horses at their racetracks were decisions based on property rights, not decisions by either the Kentucky Racing Commission or the New York State Gaming Commission. There is no California statute that authorizes the CHRB to take the action recommended in the statement,'' Marten continued.

Baffert trains As Time Goes By, a 4-year-old filly who was favored to win Saturday's Grade 2 Santa Maria Stakes at Santa Anita.

He also trains Medina Spirit, whose victory in this month's Derby is in dispute after the horse tested positive for the steroid betamethasone in postrace testing.

"The California Horse Racing Board has failed horses again by allowing trainer Bob Baffert to race his at Santa Anita today,'' People for the Ethical Treatment of Animals said in a statement Saturday. "The board put no limits on Baffert when seven horses in his barn dropped dead, when he administered thyroxine to horses who didn't have thyroid disease, and when Justify tested positive for scopolamine. Despite more than 30 medication violations, Baffert is still putting horses on tracks, and the board's refusal to suspend the trainer is as despicable and revealing as it is dangerous.''

Baffert, who has been fined multiple times for impermissible levels of medication in his horses, was suspended from entering horses at New York racetracks last week pending an investigation into Medina Spirit's positive test. He's also been suspended from Churchill Downs, the home of the Kentucky Derby.

Prior to the Kentucky Derby, all five of Medina Spirit's races were run in Southern California, four at Santa Anita and one at Los Alamitos. Justify, the horse cited in PETA's statement, is a Santa Anita-based thoroughbred who won horse racing's Triple Crown in 2018. He qualified for the Kentucky Derby that year by finishing first in the Santa Anita Derby in April 2018. However, he also tested positive for scopolamine, a banned substance that can be performance enhancing, before the Kentucky Derby.

Medina Spirit’s victory in the Kentucky Derby is in serious jeopardy because of a failed postrace drug test, one that led Churchill Downs to suspend Hall of Fame trainer Bob Baffert on Sunday in the latest scandal to plague the sport.

Rather than disqualify Justify -- which would have kept him from running in that year's Derby -- the CHRB conducted an investigation that lasted more than one month, and eventually decided that the positive results occurred because of natural contamination in the horses' feed.

Baffert testified that neither Justify nor Hoppertunity -- another horse who tested positive -- was given the drug.

"Neither I, nor the horses' veterinarians, nor anyone else involved with these two thoroughbreds, ever administered scopolamine to Justify or Hoppertunity,'' Baffert said.

Baffert could not be reached directly for a comment on PETA's statement, and a person who answered the phone at his barn in Arcadia declined to comment.

Also at Wednesday's meeting, Dr. Rick  Arthur, the CHRB's equine medical director, reported that California is expected to see a 30% reduction in equine fatalities during the current fiscal year compared with the last. He also anticipates a reduction in medication violations.

In the 2020 calendar year, officials reported 96 racehorses deaths in California -- 39 racing deaths, 28 training deaths, and 29 categorized as "other.''

Santa Anita reported 20 horse deaths in 2020 and eight so far in 2021. The park endured a storm of controversy in 2018-19, as 37 horses died in racing or training incidents during one racing season, prompting the Los Angeles County District Attorney's Office to investigate the deaths. The office concluded there was no criminal wrongdoing, but made a series of recommendations aimed at improving safety at California race tracks.

A months-long investigation by state regulators in 2019 found no evidence of illegal medications or procedures, but determined most of the horses had "pre-existing pathology,'' according to a report by the CHRB.

Officials with the CHRB and Santa Anita owner The Stronach Group enacted a series of new rules after those deaths, and Santa Anita officials say they have one of the best safety records in the industry.