WASHINGTON (AP) - The Pentagon will provide travel funds and support for troops and their dependents who seek abortions but are based in states where they are now illegal, according to a new department policy released Thursday. The military will also increase privacy protections for those seeking care.

The order issued by Defense Secretary Lloyd Austin outlines the rights and protections service members and their dependents will have regardless of where they are based, which was a key concern of troops after the Supreme Court overturned Roe v. Wade in June.

Access to abortion has become a central issue in the midterm elections. President Joe Biden promised this week that the first bill he sends to Capitol Hill next year will be one that writes abortion protections into law, if Democrats control enough seats in Congress to pass it.

And he said, in a forum with NowThis News, that he would support a federal fund to reimburse some costs for those who have to travel for the procedure.

"I do support that, and I’ve publicly urged companies to do that," he said. "I’ve urged them publicly as president of the United States saying, ‘This is what you should be doing.’’’

The high court ruling in the Dobbs v. Jackson case stripped away women’s constitutional protections for abortion and left it to states to determine whether the procedure is legal within their borders. In the months since, abortion has been banned or sharply restricted in more than a dozen states.

The new military policy sets guidelines so that local commanders aren't allowed to influence whether service members get access to care or face a culture where they or their dependents do not come forward out of fear of repercussions. It builds on an initial reaction by the Pentagon in June, when, days after the Supreme Court decision, the Pentagon said it would continue to allow medical leave for service members who needed to travel out of state to get abortions but noted it needed to review the court ruling and subsequent state laws to see if further guidance would be necessary.

Austin directed the services to implement the new policy by the end of this calendar year. 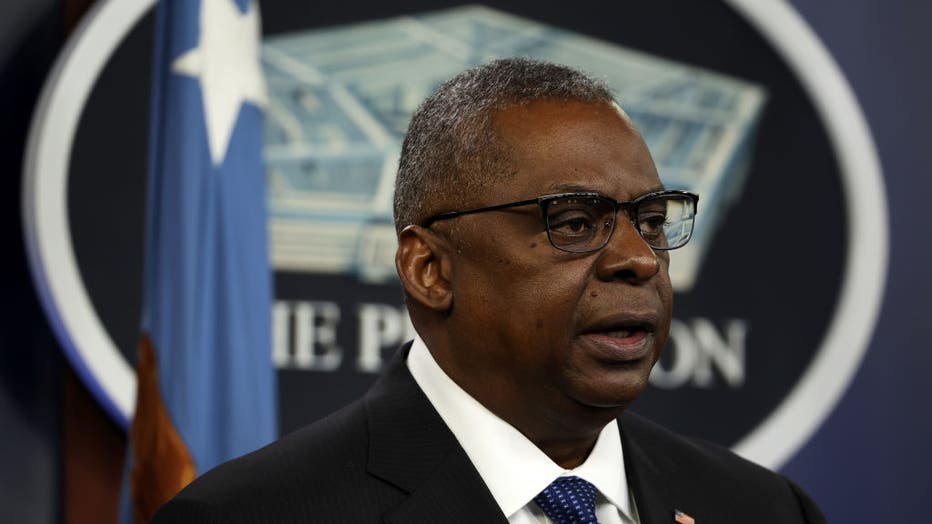 ARLINGTON, VIRGINIA - JANUARY 28: U.S. Secretary of Defense Lloyd Austin speaks during a news briefing at the Pentagon on January 28, 2022 in Arlington, Virginia. Secretary Austin and and Chairman of the Joint Chief of Staff Army Gen. Mark Milley dis

The Pentagon has also been concerned that the Dobbs decision could affect recruitment and retention as service members or potential recruits weighed the risk that they would be assigned to states where abortions are illegal. Many of the Pentagon’s major military bases are located in states including Texas and Florida where anti-abortion laws are now in place.

The new guidelines also direct each military base to publicly display what reproductive heath care support is available for service members and their dependents, extend the time in which a service member must report a pregnancy to commanders to 20 weeks and provide additional protections for defense health care providers who furnish abortion services.

Under federal law, the Pentagon’s health care system can provide abortions only in cases of rape or incest or when a mother’s life is in danger. That doesn't change under the new policy. The funds the military would provide service members would cover transportation only; they would not pay for abortion services that are not covered by federal law.

Attorney Natalie Khawam, who represented the family of slain U.S. soldier Vanessa Guillén, whose body was found last year outside the boundary of Fort Hood, Texas, said the policy is part of a continued effort by the Pentagon to address a military culture that has not been supportive of female service members. Guillén’s death led to sweeping changes as to how sexual harassment and assault are addressed in the military.