Kanye West has lost endorsement deals as a result of anti-Semitic comments made by the music star, known to most now as Ye." LiveNOW from FOX's Josh Breslow spoke with Pamela Nadell, the director of the Jewish studies department at American University about the impact on the Jewish community.

WASHINGTON - Former Vice President Mike Pence on Monday said Donald Trump "demonstrated profoundly poor judgment" and called on him to apologize after the former president had dinner last week with a Holocaust-denying white nationalist and the rapper formerly known as Kanye West days after launching his third campaign for the White House.

"President Trump was wrong to give a white nationalist, an antisemite and Holocaust denier, a seat at the table and I think he should apologize for it. And he should denounce those individuals and their hateful rhetoric without qualification," Pence said in an interview with NewsNation's Leland Vittert airing Monday night.

Still, Pence, who is considering his own potential run against his former boss, said he does not believe Trump is antisemitic or racist and said he would not have served as Trump's vice president if he was.

"But I think the President demonstrated profoundly poor judgment in giving those individuals a seat at the table and as I said, I think he should apologize for it," he added. "He should denounce them without qualification." 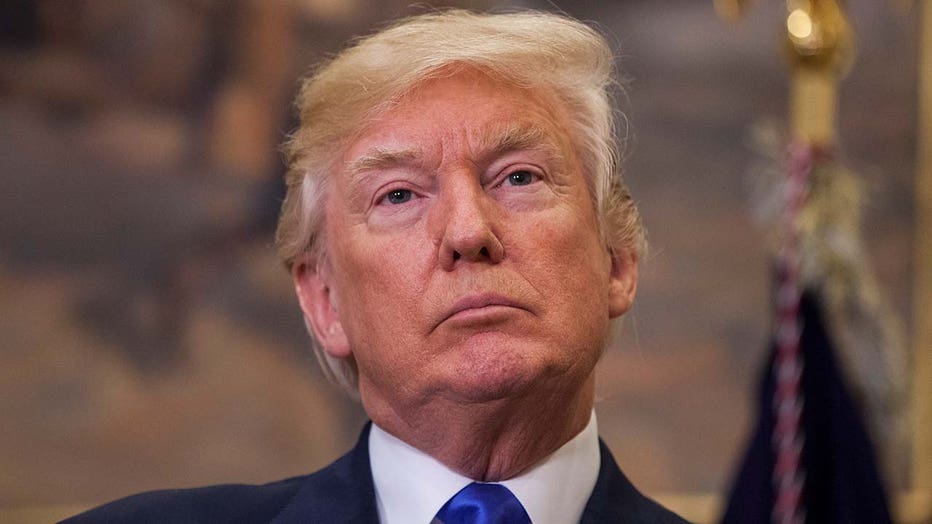 U.S. President Donald Trump attends the announcement of the introduction of the Reforming American Immigration for a Strong Economy (RAISE) Act in the Roosevelt Room at the White House on August 2, 2017 in Washington, DC. The act aims to overhaul U.S

Trump had dinner last Tuesday at his Mar-a-Lago club with West, who is now known as Ye, as well as Nick Fuentes, a far-right activist with a long history of antisemitic and white nationalist commentary.

Trump has said that he had "never met and knew nothing about" Fuentes, who had accompanied Ye, before the meeting. But he has so far refused to acknowledge or denounce the positions of ether Fuentes or Ye, who has made his own series of antisemitic comments in recent weeks, leading to his suspension from social media platforms and the end of his ties with major companies like Adidas.

The meeting has been criticized by Jewish groups like the Zionist Organization of America, which honored Trump just two days before his campaign launch, Trump's former ambassador to Israel, and former New Jersey Gov. Chris Christie, another potential Trump 2024 rival, who has become an outspoken Trump critic.

"This is just another example of an awful lack of judgment from Donald Trump, which, combined with his past poor judgments, make him an untenable general election candidate for the Republican Party in 2024," Christie told The New York Times.

On Saturday, Trump's former Secretary of State Mike Pompeo, another potential 2024 rival, denounced antisemitism as "a cancer," without directly referencing the dinner or the president under whom he served.

But other top Republicans, including many considering challenging Trump for the GOP nomination, have so far remained silent, underscoring the hold Trump maintains over the party, even as he has been blamed for their worse-than-expected showing during the midterm elections.