WASHINGTON - Speaking during her weekly press conference Thursday, House Speaker Nancy Pelosi told reporters that she has raised the prospect of the 25th Amendment to the Constitution — which allows the president's cabinet members to remove him from office — following President Donald Trump's recent coronavirus diagnosis.

The president is still reportedly sick with the virus and recovering from the White House, although he has made various appearances on social media, downplaying the severity of his illness.

Pelosi would not elaborate further on the manner.

Her intention to discuss the constitutional measure comes as Trump recently halted talks on a coronavirus aid package. The most left his GOP allies scrambling as millions of Americans go without jobless assistance, hoped-for business support or expanded testing protocols weeks before Election Day.

The 25th Amendment requires a declaration of the president's inability from the vice president and either a majority of either the heads of executive branch departments "or of such other body as Congress may by law provide." The declaration must be sent to the speaker of the House — in this case, Pelosi — and the president pro tempore of the Senate, who is currently Sen. Chuck Grassley, R-Iowa. 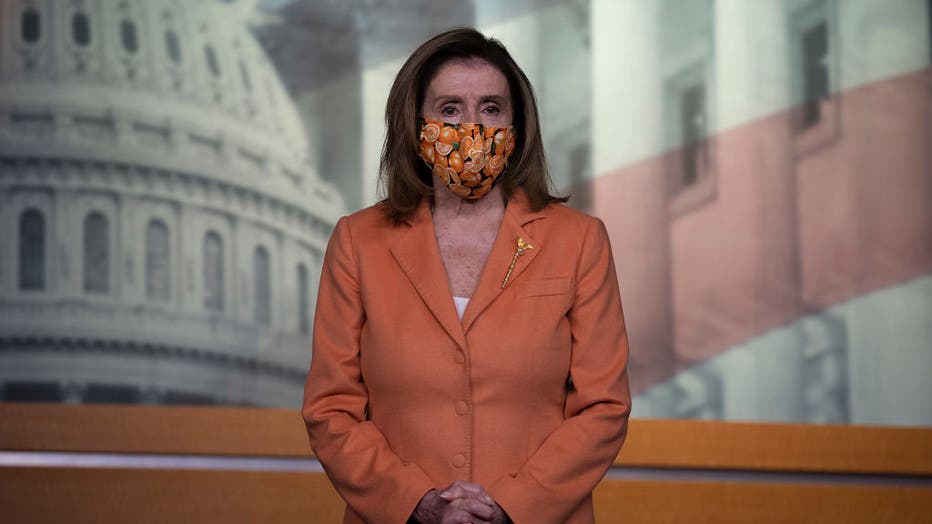 Pelosi added that she spoke with Trump’s chief negotiator, Treasury Secretary Steven Mnuchin, and said she is willing to consider a measure to prop up the airline industry, which is facing widespread layoffs. But that aid, she said, must go alongside broader legislation that includes the kind of COVID-19 testing, tracing and health practices that Democrats say are needed as part of a national strategy to “crush the virus.”

“Lives are at stake,” Pelosi said at the Capitol. “This is deadly serious.”

In a stunning admission, Senate Majority Leader Mitch McConnell said Thursday that he had stopped going to the White House two months ago because he disagreed with its coronavirus protocols. His last visit was Aug. 6.

"My impression was their approach to how to handle this was different from mine and what I insisted we do in the Senate, which is to wear a mask and practice social distancing,” McConnell said at a campaign stop in northern Kentucky for his own reelection.

The sharp words from all sides come during the final weeks in a campaign year fast turning into a referendum on the president's handling of the pandemic.

Trump's diagnosis last week coincides with an outbreak across the White House, as a number of the visitors and high level advisers to the president have now tested positive and are in quarantine.

After a Rose Garden event to announce Trump's Supreme Court nominee, Amy Coney Barrett, two Republican senators tested positive. They are now isolating. A third GOP senator who was in contact with one of the other two is also now positive and in isolation. Several members of Congress have tested positive, including a congressman who lives next door to one of those senators.

Trump said during a Fox Business interview Thursday morning that he is "feeling good," and does not believe he is "contagious at all."

FOX News and the Associated Press contributed to this story. This story was reported from Los Angeles.