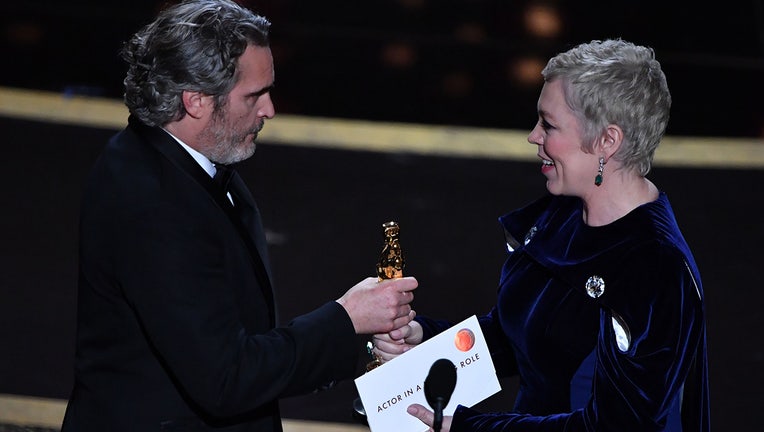 US actor Joaquin Phoenix (L) accepts the award for Best Actor in a Leading Role for "Joker" from British actress Olivia Colman during the 92nd Oscars at the Dolby Theatre in Hollywood, California on February 9, 2020. (MARK RALSTON/AFP via Getty Images)

LOS ANGELES - The South Korean film "Parasite" may have made history at the Academy Awards, but that didn't help the ratings for ABC's Oscars telecast, which averaged a record-low 23.6 million viewers, according to preliminary figures released today by Nielsen.

The previous low was 26.541 million for the 2018 ceremony, which ran for three hours, 54 minutes and was hosted by ABC late-night talk show host Jimmy Kimmel.

Viewership for most forms of programming has decreased in recent years, in part because of competition from streaming programs, including streams of the same programs shown on traditional television.

The Oscar ceremonies since 2018 are the only ones to average less than 30 million viewers. Individual viewership figures have been kept since 1974.

Final figures are scheduled to be released Tuesday, but are not expected to change significantly from those released Monday. The difference between preliminary and final figures for the Oscars is customarily between 100,000 and 300,000 viewers.

The final figure could allow the Oscars to keep its customary title of being the television season's most-watched prime-time entertainment program. The post-Super Bowl episode of Fox's "The Masked Singer" has that distinction, averaging 23.731 million viewers.

The Oscars will be the season's most-watched awards show, topping the Grammys, which averaged 18.69 million viewers.

The most-watched Academy Awards ceremony was in 1998, when an average of 55.25 million viewers watched then-box office record-setter "Titanic" win the best picture Oscar. Billy Crystal was the host that year.