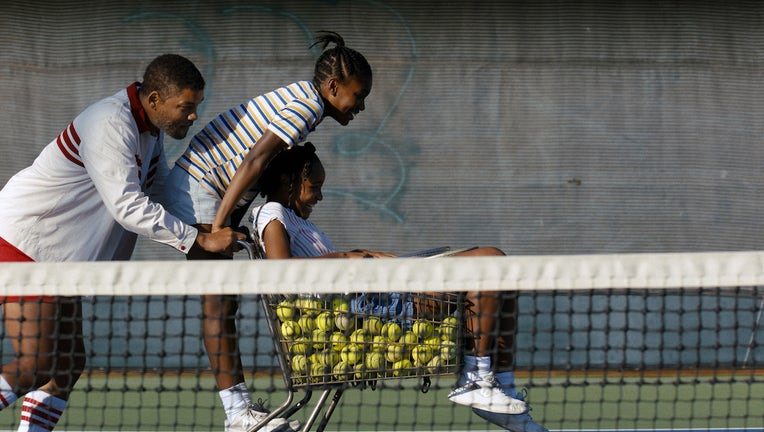 All this week we’ll be spotlighting the 10 films nominated for the big prize. And since we could all use more stuff to watch these days, we’ve also rounded up recommendations for movies (and TV shows) that echo or influence them in some way — all of which are streaming (for free!) on Tubi. Next up: the Will Smith-starring "King Richard."

The premise: "Based on the true story that will inspire the world, Warner Bros. Pictures’ "King Richard" follows the journey of Richard Williams, an undeterred father instrumental in raising two of the most extraordinarily gifted athletes of all time, who will end up changing the sport of tennis forever. Two-time Oscar nominee Will Smith ("Ali," "The Pursuit of Happyness," "Bad Boys for Life") stars as Richard, under the direction of Reinaldo Marcus Green ("Monsters and Men"). Driven by a clear vision of their future and using unconventional methods, Richard has a plan that will take Venus and Serena Williams from the streets of Compton, California to the global stage as legendary icons. The profoundly moving film shows the power of family, perseverance and unwavering belief as a means to achieve the impossible and impact the world."

Our critic’s take: A solid, unfussy biopic that inspires

Good ol’ Oscar has never been shy about celebrating the middlebrow biopic or the sports movie, which makes the presence of "King Richard" amongst this year’s crop of Oscar hopefuls especially unsurprising. That goes double (tennis pun!) for its star, Will Smith, who plays Richard Williams, father of future tennis legends Venus and Serena, with all the gusto of a movie star hungering for his long-awaited Academy Award.

Screenwriter Zach Baylin (with the presumptive approval of the Williams sisters, who act as executive producers) takes the less-expected path to charting their success, turning the focus on their father, Richard, who drills into them his plan to make them world-class tennis stars from childhood. He’s tenacious, bordering on overbearing and controlling, but his pridefulness is couched in a deep-seated desire to see his children survive a world he knows all too well can eat Black people up unless they excel far past the expectations of others.

Richard’s larger-than-life personality and real-life quirks — from his lisp to the too-short shorts he wears everywhere — give Smith plenty of opportunities to go big, but his performance works best when he lets his guard down and leaves some wounds open.

The supporting cast clearly outshine him, though, from Aunjanue Ellis’ seismic gravitas as Richard’s long-suffering wife Brandy to Saniyya Sidney and Demi Singleton as the teen tennis greats themselves. (Jon Bernthal turns in a lovely performance as one of their coaches as well, Midwestern frustration hidden behind a bushy mustache and Chi-kaa-go accent.)

Director Reinaldo Marcus Green keeps the proceedings light and brisk, especially when the film sits down to let its characters play some tennis. The result is a solid, if unfussily-made, biopic that inspires in all the right places, even if its focus seems a little oblique. [Clint Worthington]

How to watch "King Richard"

Rent or own: You can rent or purchase "King Richard" on VOD platforms like iTunes, Amazon Prime Video, Vudu and Google Play. It’s also available for purchase on DVD and Blu-ray.

On the big screen: It’s still possible to catch "King Richard" on the big screen, though probably not for long; it’s playing at limited theaters across the country.

For another crowd-pleaser about what it takes to be a coach, why not try the beloved high school football TV series "Friday Night Lights."