The community living in the Villa Calimesa Mobile Home Park will never be the same. Not after the Sandlewood fire burned through it last week, leaving homes destroyed, and neighbors lost.

CALIMESA, Calif. - One person has died and two people are unaccounted for after a wildfire spread through Calimesa.

Several injuries were reported as firefighters were battling the "Sandalwood" wildfire near Calimesa Boulevard and Sandalwood Drive in Calimesa. The fire was first reported just before 2 p.m. Thursday.

The fire burned 1,011 acres and destroyed over 76 structures before it was fully contained Monday afternoon, fire officials said.

According to the Riverside County Sheriff’s Office over 500 homes were evacuated. 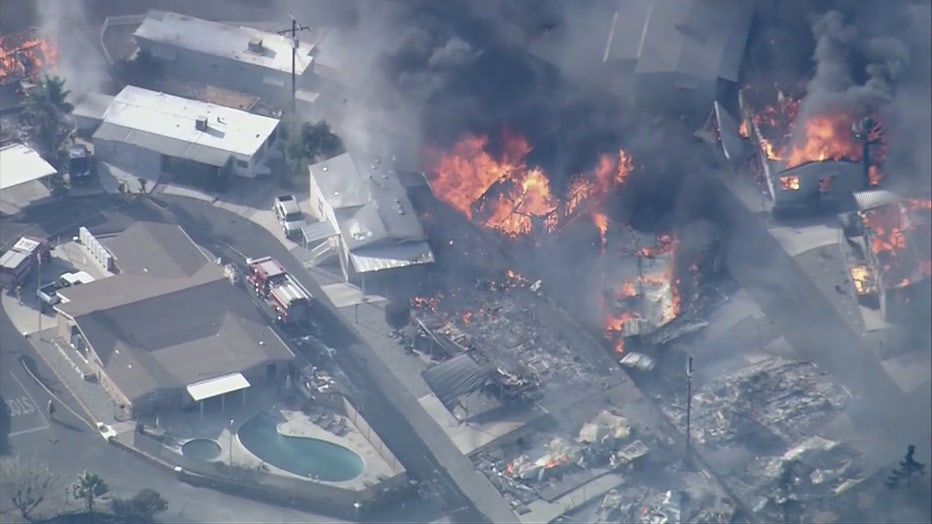 Officials say the fire started after a garbage truck left its fiery load on the side of the road. They are currently working with arson investigators to see if any criminal charges will be filed.

All mandatory evacutions were lifted at 8 a.m. Oct. 14. However, Calimesa Mobile Home Park remains closed due to unsafe conditions, according to Cal Fire Riverside.

The fire was threatening a nearby railway and power grid, fire officials said.

Since the fire broke out at school dismissal time, emergency personnel were on campus at nearby Mesa View Middle School to assist in safely escorting students from campus. The students that remained on campus after 3:45 p.m. were transported by bus to Calimesa Elementary School located at 13523 Second Street.

A care and reception center opened around 3:30 p.m. at Calimesa Senior Center, located at 908 Park Avenue in Calimesa.