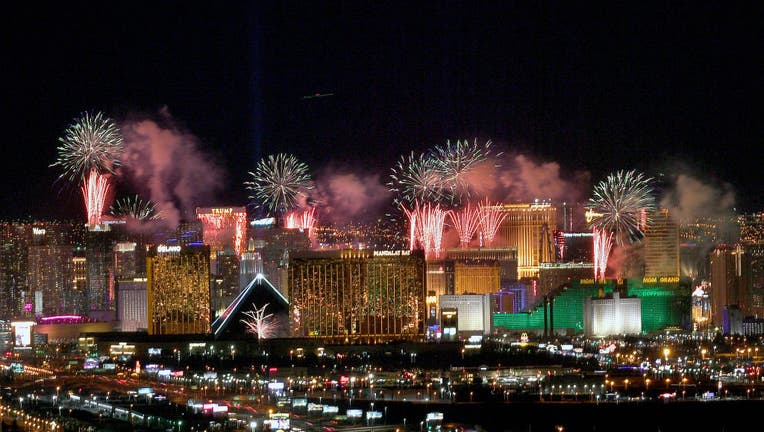 LAS VEGAS, NEVADA - JANUARY 01: Fireworks illuminate the skyline over the Las Vegas Strip during an eight-minute-long pyrotechnics show put on by Fireworks by Grucci titled "America's Party 2020" during a New Year's Eve celebration on January 1, 2020

More than 300,000 visitors are expected in town for events including a New Year’s Eve fireworks show on the Las Vegas Strip that was canceled last year due to the coronavirus pandemic.

Thousands of ticketholders also are expected at a multi-stage outdoor music event beneath a canopy light show at a downtown casino pedestrian mall called the Fremont Street Experience.

"We encourage everyone to look out for one another, take personal responsibility and proactively take actions to limit the spread of COVID-19," Naft said.

The safety talk came on a day that a coronavirus surge driven largely by the highly contagious omicron variant pushed new cases of COVID-19 in the U.S. to the highest level on record, at more than 265,000 per day on average. The previous mark was 250,000 cases per day last January, according to data kept by Johns Hopkins University.

Paris, London, Berlin and New York are among cities that have scaled back or called off New Year’s festivities, and airlines have canceled thousands of flights amid staffing shortages blamed on the virus.

Chicago officials said this week their fireworks show was still on, despite Illinois Gov. J.B. Pritzker’s warning during a news conference that, "Omicron and delta are coming to your party."

In Las Vegas, regional health officials on Wednesday reported 2,201 new coronavirus cases — the biggest increase in one day since last Jan. 11 — and 15 new deaths. New cases and deaths have been trending up, and the number of people hospitalized in Clark County with confirmed or suspected cases of COVID-19 has also jumped.

The county’s 14-day test positivity rate, representing a percentage of people tested for COVID-19 and found to be positive, reached 10.1%, the Las Vegas Review-Journal reported. The World Health Organization goal is 5% or less to relax mitigation measures.

The Southern Nevada Health District reported 68.2% of Las Vegas-area residents have had at least one shot of COVID-19 vaccine, and 55.8% are fully vaccinated.

Goodman, a vocal critic of Nevada mask mandates and restrictions on crowd sizes in the first months after business closures were enacted in March 2020, wore a mask Wednesday but removed it to remind the media that the biggest Las Vegas events will be outside.

"We are saying people (can) feel comfortable to be mask-free," the mayor said. "But individually, if you have an issue or you’re concerned, wear your mask. It’s a question of respect."

Last year, even though fireworks were canceled, thousands of revelers still congregated on casino-lined Las Vegas Boulevard to ring in 2021.

This year, the National Weather Service predicts a chilly Friday night with temperatures near freezing on the Strip beneath mostly clear skies and winds that are not expected to prevent fireworks.

The eight-minute choreographed pyrotechnic display will be shot from atop eight resort properties bracketed by The STRAT tower and the MGM Grand hotel, accompanied by a soundtrack airing on two FM radio stations in Las Vegas.

Clark County Undersheriff Christopher Darcy invoked lessons learned about police, fire, ambulance and communications cooperation since a lone shooter in October 2017 rained gunfire for 10 minutes from a high-rise hotel into a Las Vegas Strip concert crowd. Fifty-eight people died that night, and hundreds were injured. At least two other deaths were later attributed to the mass shooting, which remains the deadliest in modern U.S. history.

A curfew requires anyone under 18 in both areas to be accompanied by a parent or guardian.

"We encourage folks to take the proper precautions — be that vaccinations or the wearing of face coverings — and to do all the things you can do to protect yourself," the police official said.

He added revelers should arrange transportation that does not involve driving under the influence of alcohol or drugs.

The Las Vegas Convention and Visitors Authority pointed in a statement to the fireworks being visible "on and off the Strip and around the Las Vegas valley."

"We encourage revelers to take the proper health and safety precautions before they arrive and while they are in Las Vegas, follow the indoor mask mandate and seek medical care if they are feeling unwell," the statement said.