SEOUL, South Korea - North Korea said Thursday it succeeded in launching ballistic missiles from a train for the first time as part of continuing efforts to bolster its "war deterrence," a day after the two Koreas tested-fired missiles hours apart in dueling display of military might.

The launches underscored a return of tensions between the rivals amid a prolonged stalemate in U.S.-led talks aimed at stripping North Korea of its nuclear weapons program.

Pyongyang’s official Korean Central News Agency said the North Korean launches on Wednesday were from a drill of a "railway-borne missile regiment," which it said transported the weapons system along the rail tracks in the country’s mountainous central region and accurately struck a sea target 800 kilometers (500 miles) away.

State media showed what appeared to be two different missiles streaking up from rail-car launchers engulfed in orange flames along tracks surrounded with dense trees.

The South Korean and Japanese militaries had said that two short-range ballistic missiles fired by North Korea flew 800 kilometers (500 miles) before landing in the sea inside Japan’s exclusive economic zone set outside its territorial waters. The last time a North Korean missile landed inside that zone was in October 2019. 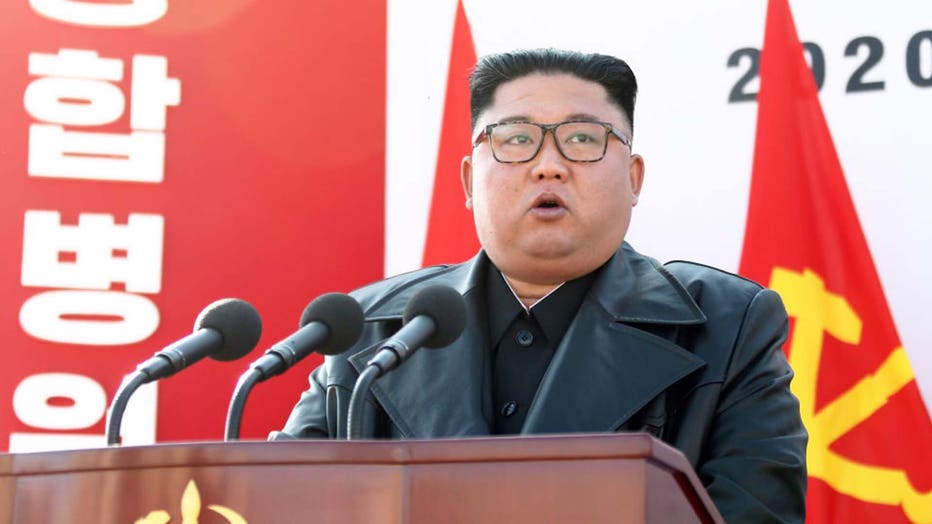 Pak Jong Chon, a senior North Korean official who has been seen as influential in the country's missile development, said Wednesday’s tests were successfully conducted in line with the "strategic and tactical design and intention" of the North’s ruling Workers’ Party. In a rare party congress in January, North Korean leader Kim Jong Un vowed to bolster his nuclear deterrent in face of U.S.-led sanctions and pressure and issued a long wish list of sophisticated equipment, including longer-range intercontinental ballistic missiles, nuclear-powered submarines, spy satellites and tactical nuclear weapons.

Wednesday’s launches came two days after the North said it tested new cruise missiles over the weekend. The North said that those missiles, which are being developed to be nuclear-capable, demonstrated an ability to strike targets 1,500 kilometers (932 miles) away, a distance putting all of Japan and U.S. military installations there within reach.

Hours after the latest North Korean launches, South Korea reported its first test of a submarine-launched ballistic missile. As South Korean President Moon and other top officials looked on, the missile flew from a submarine and hit a designated target, Moon’s office said. It did not say how far the weapon flew.

Kim Yo Jong, the powerful sister of the North Korean leader, criticized Moon and threatened a "complete destruction" of bilateral relations over the comments he made while observing the tests.

South Korea, which doesn’t have nuclear weapons, has been accelerating efforts to build up its conventional arms, including developing more powerful missiles. Moon, while observing Wednesday’s tests, said the South’s growing conventional missile capacities will serve as a "sure deterrence" against North Korean provocation.

Kim took offense to Moon describing North Korean weapons demonstrations as a provocation and said warned of dire consequences in inter-Korean relations if he continues on with what she described as slander of North Korea.

She said North Korea is developing its military capabilities for self-defense without targeting a specific country, and that South Korea is also increasing its military capabilities. North Korea has often accused the South of hypocrisy for introducing modern weapons while calling for talks on easing tensions between the divided countries. Kim Dong-yub, a professor at the University of North Korean Studies in Seoul, said the North Korean photos indicated that the missiles the North fired from the trail tracks were a solid-fuel shortrange weapon the North first began testing from truck launchers in 2019. The missiles, likely modeled on Russia’s Iskander missiles, are designed to fly at relatively low altitudes where the air is dense enough to allow for maneuverability in flight, making them harder to be intercepted by missile defense systems.

While the North is trying to broaden its launch systems for nuclear-capable missiles to improve their survivability, Kim questioned whether rail-mobile missiles would meaningfully improve the country's military capabilities when the North's simple rail networks would be easy targets during crisis.

U.N. spokesman Stephane Dujarric expressed concern at the missile launches, reiterating that "diplomatic engagement remains the only pathway to sustainable peace and complete, verifiable denuclearization of the Korean peninsula."

Experts say North Korea is building up its weapons systems to apply pressure on the United States in the hopes of winning relief from economic sanctions aimed at forcing the North to abandon its nuclear arsenal. U.S.-led talks on the issue have been stalled for more than two years.

Observers say Moon’s government, which has been actively pursuing reconciliation with North Korea, may have taken action to appear tougher in response to criticism that it’s too soft on the North.

The rival nations are still technically in a state of war since the 1950-53 Korean War, which pitted the North and ally China against the South and U.S.-led U.N. forces, ended in an armistice, not a peace treaty.

The international community wants North Korea to abandon its nuclear program and has long used a combination of the threat of sanctions and the promise of economic help to try to influence the North. But negotiations have stalled since 2019, when then-U.S. President Donald Trump’s administration rejected the North’s demand for major sanctions relief in exchange for dismantling an aging nuclear facility.

Kim Jong Un’s government has so far rejected the Biden administration’s overtures for dialogue, demanding that Washington abandon what it calls "hostile" policies first. But North Korea has maintained its self-imposed moratorium on nuclear and long-range missile tests, a sign that it may not want to completely scuttle the possibility of reopening the talks.