Two people were taken to a hospital with non-life-threatening injuries after a damaged hydrant sprayed a blast of cold water onto skiers riding above on a chair lift.

BANNER ELK, N.C. (AP) - Several people were hurt at a North Carolina ski resort when a damaged hydrant sprayed a blast of water onto skiers riding above on a lift, prompting several skiers to jump.

Management at Beech Mountain Resort told WBTV-TV that a guest skied into the water and air hydrant Friday while snowmaking operations were underway. Video circulating on social media shows skiers on the chair lift getting hit by blasts of water.

The resort said in a statement that two people were taken to an area hospital by Avery County emergency medical workers with what appeared to be injuries that were not life-threatening. The person who skied into the hydrant was not injured.

"As soon as we became aware of the problem, our operations and safety team took action as quickly as possible to drain the system safely and assist the remaining skiers in disembarking at the top of the lift," resort management said in a statement.

WSOC-TV spoke to two women who said they jumped 25 feet from the ski lift when the water hit them.

Emma Lopinto said she was at the ski resort celebrating her 19th birthday Friday when she and her best friend were doused in water as they rode above on the chair lift. 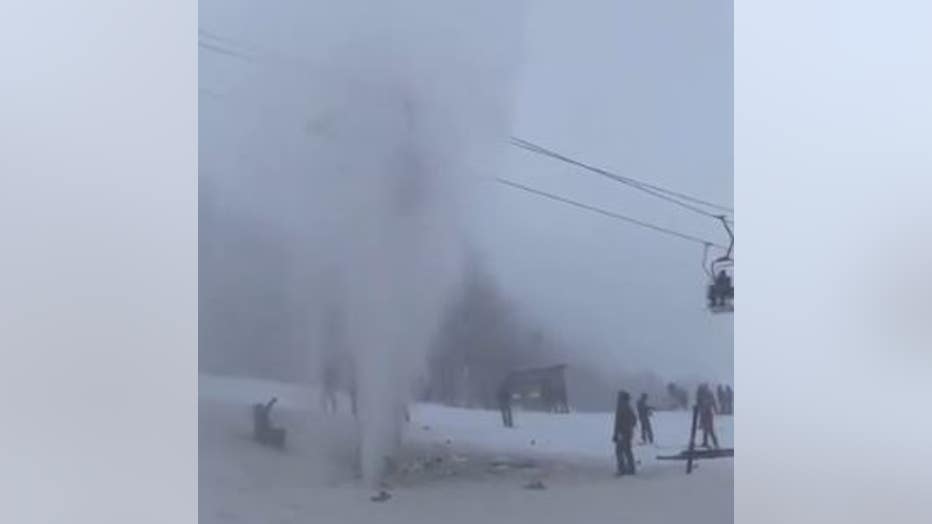 Two people were taken to a hospital with non-life-threatening injuries after a damaged hydrant sprayed a blast of cold water onto skiers riding above on a chair lift.

"We just grabbed each other and ducked our head and all I remember is the metal bar flying up and then me flying up. I don’t remember anything and I remember opening my eyes belly first on the ground," Lopinto said.

"I have bruises from head to toe, some big, some small, like all over my body," she said.

Ivy-Elise Ivey told WSOC that she and her boyfriend could see what was happening and decided to jump along with several others.

"Everyone was in shock. You’re not going to jump from 25 feet, if you don’t think you have to," Ivey said.

She said she broke her arm, fracturing it around her elbow.

Ivey said she is disappointed in how the resort handled the problem. Resort officials said that Ivey was not instructed to jump by resort staff.

"This was a very difficult situation for both our guests and our staff. We very much regret that the incident occurred and we again offer our apologies to the guests that were adversely affected," the resort said in a statement.