New COVID-19 guidelines for NFL team for the upcoming season amid the pandemic.

NEW YORK - The NFL says teams are responsible for canceled games this upcoming season if a coronavirus outbreak occurs among unvaccinated players or staff — and it could result in a forfeit and loss if the game cannot be rescheduled.

In a memo obtained by FOX Television Stations, the NFL confirmed the decision.

"If a game cannot be rescheduled within the current 18-week schedule and is cancelled due to a Covid outbreak among non-vaccinated players on one of the competing teams, the club with the outbreak will forfeit the contest and will be deemed to have played 16 games for purposes of draft, waiver priority, etc. For the purposes of playoff seeding, the forfeiting team will be credited with a loss and the other team will be credited with a win," NFL commissioner Roger Goodell wrote in the memo Thursday.

The memo also said if a game is rescheduled due to an outbreak among unvaccinated players, the club experiencing the outbreak will be responsible for all additional expenses incurred by the opposing team and will also be required to pay any shortfall between actual and expected payment. In addition, neither team’s players will receive their weekly salary if the game cannot be rescheduled.

"If a game is cancelled/postponed because a club cannot play due to a Covid spike among or resulting from its non-vaccinated players/staff, then the burden of the cancellation or delay will fall on the club experiencing the Covid infection," Goodell continued.

In the four-page document, the commissioner said the NFL does not anticipate adding a "19th week" to accommodate games that cannot be rescheduled within the current 18 weeks of the regular season.

"The league will make every reasonable effort, consistent with underlying health and safety principles, to complete the full 272-game regular season within the current 18 weeks and all postseason games as scheduled, in a safe and responsible way," the memo read.

Meanwhile, for vaccinated individuals who test positive for COVID-19, the NFL will "attempt to minimize the competitive and economic burden on both participating teams." The organization said rescheduling a postponed game will be dependent on health and safety advice from medical experts.

The NFL said the guidelines are based on last season’s experience and follow discussions with a number of league committees, medical experts and outside advisors.

"As we learned last year, we can play a full season if we maintain a firm commitment to adhering to our health and safety protocols and to making needed adjustments in response to changing conditions," the memo continued.

On Thursday, NFL players sounded off on social media in response to the announcement.

Deandre Hopkins, wide receiver for the Arizona Cardinals wrote on Twitter, "Never thought I would say this, But being put in a position to hurt my team because I don’t want to partake in the vaccine is making me question my future in the NFL." 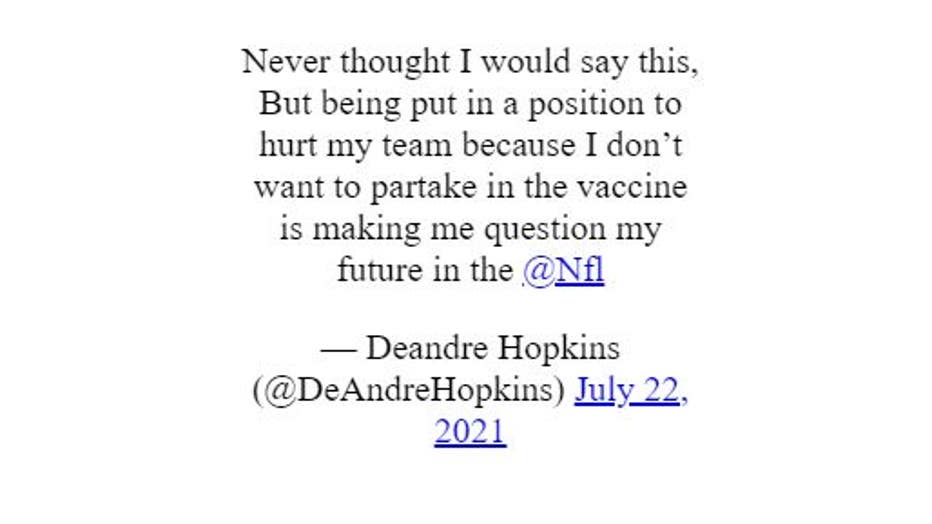 As of Thursday’s announcement, more than 75 percent of players are in the process of being vaccinated, and more than half the clubs have vaccination rates greater than 80 percent of their players.