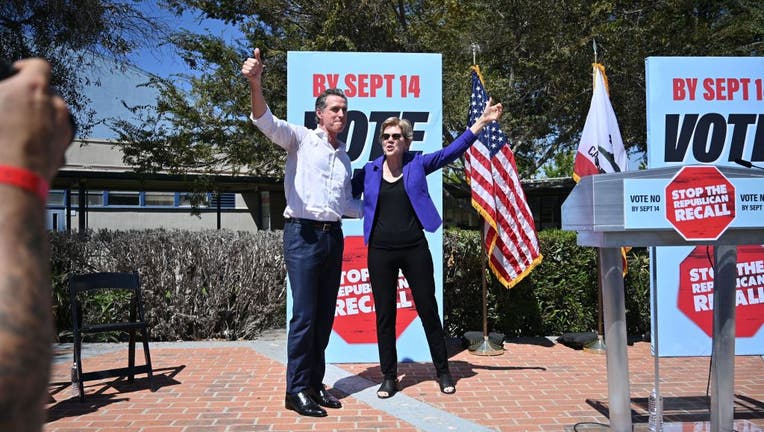 On a crystalline summer morning, the Massachusetts senator and former presidential candidate joined the embattled governor for an outdoor rally at a suburban Los Angeles high school in the state’s populous Democratic heartland, where polls show left-leaning Latino and younger voters have been slow to turn in their mail ballots for the contest that culminates Sept. 14.

California Democratic Gov. Gavin Newsom enlisted progressive star Elizabeth Warren on Saturday to help him overcome a looming recall election that could remove him from office, warning that his ouster carries possible consequences for the national Democratic agenda on climate change, immigration and reproductive rights.

At a time when Washington is often gridlocked, Warren argued that states have become the engines of government policy-making, and voters need to recognize how much is at risk in the recall and how broadly the results will be felt.

She said Elder, a conservative talk radio host, "dreams of being California’s own Donald Trump."

Battles over women’s rights, the coronavirus and a warming climate are "not just in Texas, Florida, South Dakota," she said, referring to states with conservative governors. "These fights have come to California."

Newsom warned that Trump was defeated in 2020 but "we did not defeat Trumpism."

In recent months, Newsom appeared imperiled from widespread public frustration over his pandemic restrictions that shuttered schools and businesses. But he is hoping to bounce back with a decisive victory that could provide a springboard for 2022, when he will face reelection, and return his name to discussions about future White House contenders.

Recent polling has suggested he has established a lead, but Newsom has been warning the race could be close. Mail-in ballots went to all 22 million registered voters in mid-August for the unusual, late-summer election. In the recall, voters are asked two questions: Should Newsom be removed? And, if so, who should replace him?

With Warren on stage, Newsom appeared to be reassuring voters in the party’s liberal wing that he remained loyal to their agenda, despite grumbles that he has been moving too slowly in Sacramento.

Despite falling short in the 2020 Democratic presidential primary, Warren remains a popular figure with party progressives for promoting such proposals as expanding Social Security benefits and canceling student-loan debt for millions of Americans.

"His campaign in the recall has been about what he stands against. This is a chance to remind voters what he stands for, especially for those on the left who haven’t seen as much progress on things like single-payer health care and police reform as they would like," Kousser added.

Elder, meanwhile, was crisscrossing the state delivering his message that one-party, Democratic dominance in Sacramento was to blame for rising crime rates, a homeless crisis that is a national embarrassment, climbing taxes and home prices that are out of reach for many working-class families. If elected, he has promised to lift any mask or vaccine mandates for state workers that remain in place.

Newsom was elected in a 2018 landslide in the heavily Democratic state, but his popularity faded as he contended with public unrest over long-running school and businesses closures during the pandemic, fallout from a multibillion-dollar unemployment benefits scandal and embarrassment over his decision to attend a lavish birthday dinner at an exclusive restaurant in November — without a mask — while lecturing residents to stay home for safety.

As the race enters its final days, Newsom has talked of the contest in increasingly stark terms, depicting it as a focal point in the broader national fight over America’s political identity and direction in the post-Trump era.

He told a group of Latinos this week that the drive to push him from office rose from the state’s political far-right in 2020 because "California is standing up against all things Trump and Trumpism."

He said those on the Republican fringe grew indignant when the recoiled against the Trump administration’s immigration policies, which made it harder for immigrants to live or work in the United States, while seeking to sharply reduce the number of people entering the country illegally, including through construction of his signature border wall.

California, meanwhile, expanded government-paid health care for lower-income residents 50 and older, regardless of their immigration status. He also referenced the recent U.S. Supreme Court decision to allow a Texas law banning most abortions to remain in effect.

The contest is being watched nationally because of its possible consequences for the 2022 midterm elections, when control of Congress again will be in play.

It also appears Newsom is making a concerted effort to connect with women voters, after Elder faced allegations that he emotionally mistreated a former fiancee and was criticized for once writing that employers should be able to ask women if and when they plan to get pregnant. In addition to Warren’s stop Saturday, Newsom has a planned appearance with Minnesota Sen. Amy Klobuchar on Sunday, while Vice President Kamala Harris is expected in the state next week.

The remainder of the race will focus on turning out voters.

"We’re here ... with a very intense purpose in mind," Newsom told reporters after the rally. "This all comes down to turnout."