Gavin Newsom was moved to tears after a Saugus High School shooting survivor thanked the California Governor for signing a law allowing people to sue anyone who distributes illegal assault weapons, parts that can be used to build weapons, guns without serial numbers, or .50 caliber rifles.

His action comes one month after conservative justices overturned women’s constitutional right to abortions and undermined gun control laws in states including California.

Newsom stitched the two hot-button topics together in approving a law allowing people to sue anyone who distributes illegal assault weapons, parts that can be used to build weapons, guns without serial numbers, or .50 caliber rifles. They would be awarded at least $10,000 in civil damages for each weapon, plus attorneys fees.

"While the Supreme Court rolls back reasonable gun safety measures, California continues adding new ways to protect the lives of our kids," Newsom said in a statement released before he signed the bill. "California will use every tool at its disposal to save lives, especially in the face of an increasingly extreme Supreme Court."

California Gov. Gavin Newsom was in Los Angeles Friday to sign a new gun bill into law. The new law mimics Texas' model, allowing any citizen in California to sue anyone who has illegal weapons.

Lawmakers patterned the bill, at Newsom’s request, after a Texas law allowing citizens to sue anyone who provides or assists in providing an abortion. The U.S. Supreme Court gave preliminary approval to the Texas law, but California’s law will automatically be invalidated if the Texas law is eventually ruled unconstitutional.

Newsom ran $30,00 worth of full-page advertisements in three Texas newspapers Friday criticizing what he said is Gov. Greg Abbott’s hypocrisy on gun safety. The ads parrot a comment by Abbott but substitute gun violence where he mentions abortion. 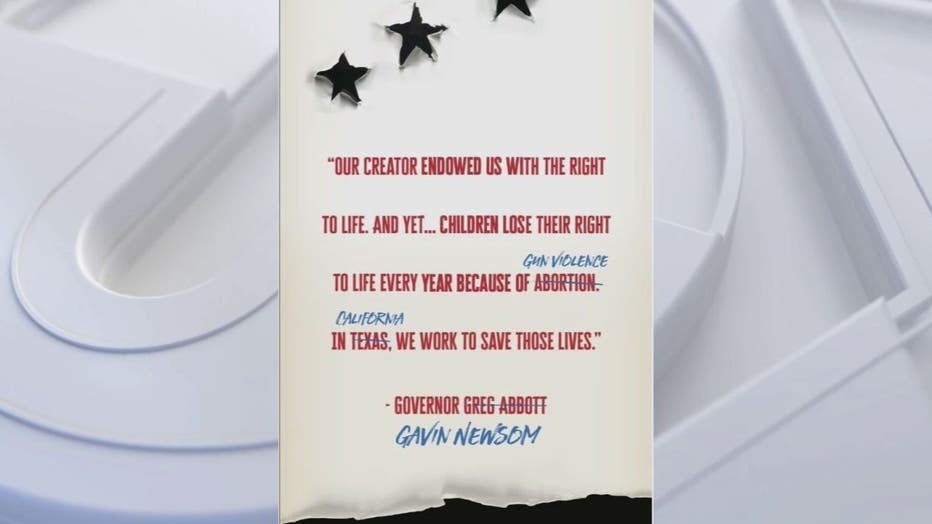 "Governor Newsom should focus on all the jobs and businesses that are leaving California and coming to Texas," Abbott spokeswoman Renae Eze responded.

It’s a similar tactic to the television ad that Newsom, a Democrat running for re-election, recently aired in Florida targeting Gov. Ron DeSantis. Newsom has repeatedly denied presidential aspirations even while stoking that speculation.

Opponents of the California bill, including an unusual combination of gun owners’ advocates and the American Civil Liberties Union, have criticized creating what they said amounts to a bounty system to encourage such lawsuits. The ACLU called California’s law "an attack on the constitution" for deliberately trying to sidestep judicial review by empowering enforcement by citizens and not governments, and for undermining due process rights.

"It’s a crappy decision, but the reality is that as long as it is the law let’s make benefit of it by virtue of saving lives, trying to save lives, in California," the bill’s author, Democratic state Sen. Robert Hertzberg, said while defending the bill in an interview. "It’s all about these two big issues that are facing us. And you can’t have a double standard. You can’t have one standard for guns and another standard for women’s reproductive health. It’s not right."

Newsom planned to sign the bill while visiting a memorial at Santa Monica College to five victims killed in 2013 by a gunman using such a gun — a homemade assault-style rifle without a serial number.

The new law "will make it easier for victims of ghost gun violence, like me, to help enforce our gun laws," said Mia Tretta, who was shot in Santa Clarita during a 2019 attack at Saugus High School and is now a volunteer with Students Demand Action.

Aside from the merits of the bill, opponents say it is written to discourage any legal challenges to California’s myriad gun regulations by requiring plaintiffs or lawyers to pay attorneys’ fees if they lose the lawsuit.

That portion of the law "is intended to make it impossible to file a Second Amendment challenge to an unconstitutional gun control law. That is itself unconstitutional," said Chuck Michel, president of the California Rifle and Pistol Association.

Newsom acted a day after he signed eight other gun laws among numerous measures adding to California’s already strict regulations.

They include measures requiring schools to periodically inform parents about the safe storage of firearms and barring anyone from making more than three guns a year or making any guns with a 3D printer without obtaining a state-issued license.