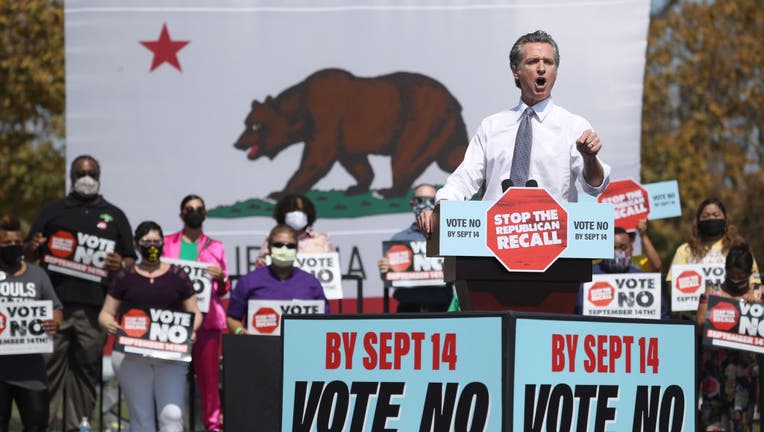 LOS ANGELES - Democratic allies of California Gov. Gavin Newsom continued to express confidence this weekend in his chances of beating back a recall but warned his supporters not to let up on urging people to vote as they seek a decisive win, while Republicans said the contest is far from settled.

"We don’t need to just win by a little, we need to win by a lot. We need to send a message: Hands off our democracy, hands off our California," said April Verrett, president of the SEIU Local 2015, as she rallied union members who have been among Newsom’s biggest supporters.

Newsom joined the Oakland rally as his Republican rivals made their cases up and down the state and both major parties sent volunteers out to knock on doors and urge their supporters to vote. The race concludes Tuesday, and more than a third of voters have already mailed in their ballot or voted early in person.

There's just a few days left to vote in the recall election and candidates, including Gavin Newsom are making their final push to voters.

A recent poll from the Public Policy Institute of California shows Newsom likely to survive, and Democrats are making a stronger showing in early voting. But the GOP is expecting a larger turnout on Election Day, given many Republicans are skeptical of voting by mail.

"Anyone who is counting the recall out at this point is not really in touch with what’s actually going on with this movement," said Republican Assemblyman Kevin Kiley, who is running to unseat Newsom and is favored by some of the recall’s original supporters.

The ballot includes two questions: Should Newsom be recalled from office and, if so, who should replace him? If a majority of voters want him gone, he would be replaced by whoever gets the most votes among the 46 candidates on the replacement ballot.

Newsom has encouraged his supporters to vote "no" on the first question and skip the second one all together, something Republican rival Kevin Faulconer criticized as he cast his own ballot in San Diego, where he previously served as mayor.

Beyond campaigning, several candidates marked the 20th anniversary of the Sept. 11 terrorist attacks. Larry Elder, who is considered the Republican frontrunner, helped read the names of people who died in the attacks during a memorial service in Southern California before having lunch with veterans.

The Issue Is: Larry Elder and John Myers

Elex speaks with Larry Elder on his case against Governor Gavin Newsom. John Myers of the LA Times stops by to discuss recent polling and the state of the gubernatorial race.

Kiley and businessman John Cox, another GOP candidate, also attended anniversary events, while Newsom visited the Wall of Heroes memorial at the California National Guard’s headquarters before his campaign event.

More than 7.7 million people have already voted, according to ballot tracking data compiled by Political Data Inc., a data firm that works with Democrats.

RELATED: California Recall Election: Everything you need to know

Newsom called the numbers encouraging and attributed it to more Democrats becoming aware of the recall as it winds to a close. Still, he said he’s taking nothing for granted. H will spend the next few days campaigning in Southern California, and on Monday he will be joined by Democratic President Joe Biden.

He stuck to his closing message that the race could have profound consequences beyond California, calling it a contest of "outsize consequences." He and other Democrats have likened it to former President Donald Trump’s refusal to accept the results of the 2020 presidential election and have charged Republicans with pursuing a recall because they can’t win a normal election. Californians haven’t elected a Republican statewide since 2006.

The recall made the ballot through a process in the California Constitution for more than a century. Originally the recall was likely to be held sometime in October or November, but Democrats in the state Legislature sped up the process to allow for an earlier election.

Republicans angry with Newsom’s policies on immigration, crime and a host of other issues sparked the recall drive, but it took off during the coronavirus pandemic. Organizers got more than 1.7 million signatures to place it on the ballot. That’s less than a tenth of registered voters.

"Gavin Newsom has failed Californians. From surging crime to a broken unemployment department and raging wildfires, our state deserves better than this governor’s serial incompetence," California Republican Party Chairwoman Jessica Millan Patterson said in a statement. She was out Saturday knocking on doors in Los Angeles County.

Meanwhile, the union leaders who rallied alongside Newsom pointed to his pandemic policies as life-saving measures for home health care and other essential workers. They also applauded him for increasing providers’ pay, which was cut under former Republican Gov. Arnold Schwarzenegger, the winner of the 2003 recall.

The Service Employees International Union and its affiliates have donated at least $3.5 million to Newsom’s campaign, and unions collectively are his biggest financial backers.