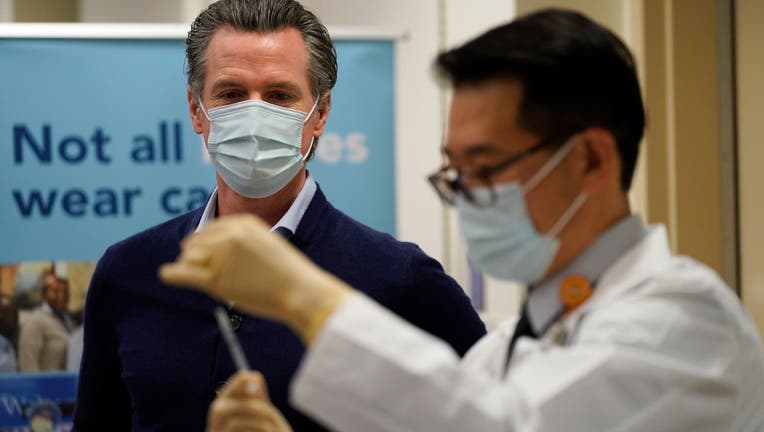 SACRAMENTO, Calif. - California Gov. Gavin Newsom cancelled a Wednesday news conference on the coronavirus out of "an abundance of caution" after pro-Trump protesters gathered outside the state Capitol, though there were no major incidents or attempts to access the building.

His decision came as rioters stormed the U.S. Capitol in an attempt to to overturn the presidential election results that elected Democrat Joe Biden as the next president, forcing members of Congress, journalists and staff to evacuate, shelter and even put on gas masks.

Newsom, a Democrat, called it "reprehensible and an outright assault to our democracy and Democratic institutions." He further called on President Donald Trump to "move immediately to a peaceful transition of power." Biden is set to be inaugurated on Jan. 20.

The rioters on Wednesday halted Congress as members were meeting to certify the results of the Electoral College, an event that drew protests across the country, including in several Southern California cities.

While Newsom chose to cancel his briefing, there were "no major incidents" reported during the demonstration at the Capitol, his office said in a statement. Newsom typically holds his coronavirus briefing at the Office of Emergency Services outside of Sacramento, but he had been in the Capitol for an earlier event and planned to hold Wednesday's news conference there.

Hundreds of people gathered outside of the building and in downtown Sacramento, eventually drawing counter-protesters. Many did not wear masks as they crowded close together to listen to Trump give a speech, broadcast on speakers piled atop a flatbed truck. The gathering officially ended by mid-afternoon, though there was a heavy police presence and some skirmishes between the different groups.

A group of about 60 people held a protest in Huntington Beach on Wednesday, said police Lt. Brian Smith. The group congregated near the pier holding American flags and signs and wearing red caps supporting president Trump, he said. No incidents were reported.

Jessica Millan Patterson, the chairwoman of the California Republican Party called violent protests "unacceptable" though she did not directly address Trump supporters.

"As the party of law and order, I am deeply saddened and disappointed by these actions and condemn the violence," she wrote on Twitter.

State Sen. Shannon Grove, the Republican leader in the Senate, initially blamed the protests in Washington, D.C., on "antifa." She then deleted the Tweet and wrote "this is not the way to settle differences. Enough."