LOS ANGELES - Reports of hate crimes in Los Angeles County rose to 635 last year, reaching their highest point in a dozen years and continuing a trend of increases, according to an annual report released Wednesday by the L.A. County Commission on Human Relations.

The survey showed that the 20% increase in hate crime was largely due to a 53% spike in racial crimes. Crimes targeting Blacks, Latinos, whites and Asians all rose dramatically. The increase reflects the largest numeric and percentage increase since 2003.

Anti-Asian hate crimes increased by 76% in 2020, mirroring a trend in many other jurisdictions as physical and verbal attacks on Asian Americans rose during the COVID-19 pandemic. Of the 44 anti-Asian hate crimes reported in the county in 2020, more than three-quarters involved physical violence -- up from 58% in 2018, the report shows. 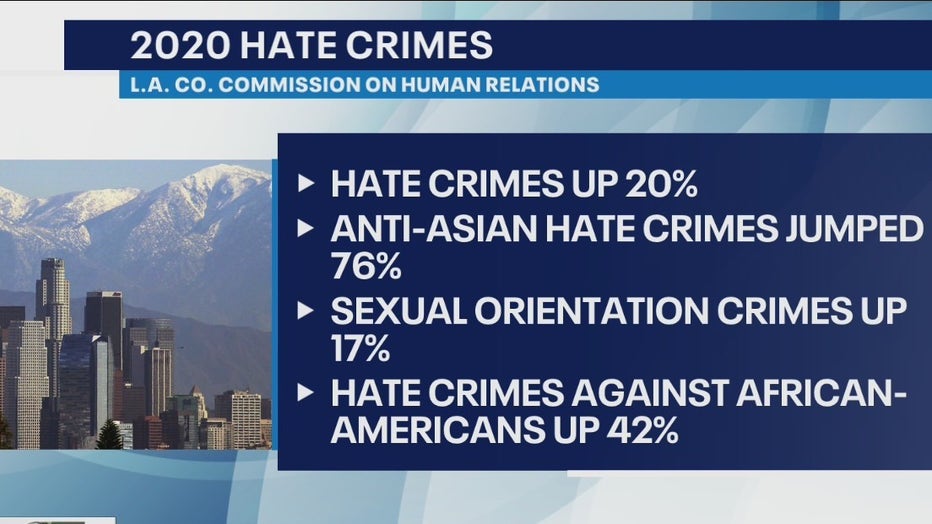 Racist crimes constituted 61% of all hate crimes, compared to 48% the previous year. Blacks were grossly over-represented: Although they represent only 9% of county residents, Blacks comprised 42% of racial crime victims.

LGBTQ individuals were also among those most frequently targeted in 2020. Sexual orientation crimes increased 17% and 84% of them targeted gay men. At the same time, anti-transgender crimes declined last year from 42 to 32 but it was still the third-largest number ever reported in the county.

Robin Toma, the commission's executive director, said during an online announcement of the report that the new study reveals "an explosion of hate that broke record after record."

He said the COVID-19 pandemic unleashed "a wave of hate and hostility against Asian Americans, who were unfairly blamed for coronavirus, and violently terrorized."

Although alarming, the 2020 count is well below the numbers reported during the late 1990s and early 2000s, the report says.

The current study showed that religious crimes declined 18% and comprised 13% of the total number of reported hate crimes. These were overwhelmingly anti-Semitic.

Also last year, there were 56 crimes in which specifically anti-immigrant slurs were used, a 14% increase over the previous tally.

"The pandemic intensified so many problems that already existed in our society including hate and prejudice," county Supervisor Janice Hahn said. "It is a tragedy that in 2020, so many of the same communities that were impacted most by COVID-19 were also victims of this disturbing increase in hate and violence."

Researchers reported that the rate of violence grew from 65% to 68%, the highest rate since 2003. There was explicit evidence of white supremacist ideology in 19% of all such crimes reported in LA County in 2020, compared to 22% the previous year.

The largest number of hate crimes took place in the Los Angeles metropolitan area, which stretches from West Hollywood to Boyle Heights, followed by the San Fernando Valley.

As in the previous years, the largest number of hate crimes occurred in public places, followed by homes, and businesses.

Hate crimes documented in the report represent only a portion of such crimes actually committed last year, officials noted. The U.S. Justice Department reports that more than half of all hate-motivated incidents are generally not reported to law enforcement.