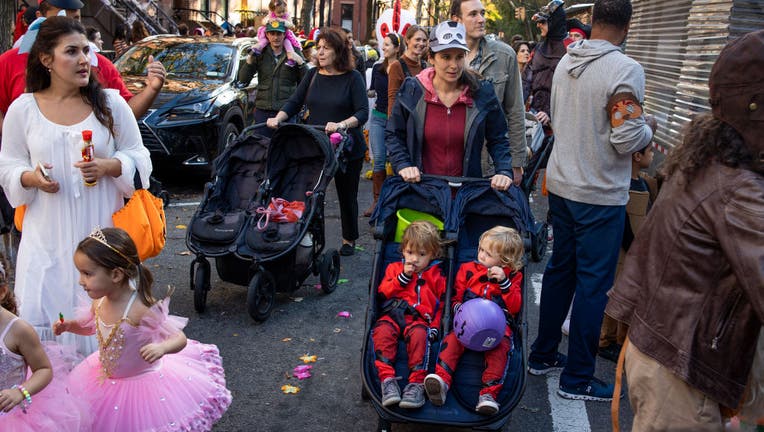 BROOKLYN, NY - OCTOBER 31: Parents escort their young children through the streets to collect candy on the evening of Halloween, October 31, 2021 in the brownstone neighborhood of Cobble Hill, Brooklyn, New York. (Photo by Andrew Lichtenstein/Corbis

With Halloween approaching soon, many parents and children may be stuck trying to find the right costume.

According to Google Trends, Google is telling the anxious Halloweeners not to fret because they have released the top trending costumes from the past week.

Also, The Halloween & Costume Association, a New Jersey-based trade organization focused on promoting the celebration of Halloween nationwide, has identified a list of Halloween decorations and costumes that are on track, reportedly, to be popular this season.

RELATED: A history of Halloween candy: Trends and costs through the years

Let's take a brief look at the history behind Halloween candy and how it became the sweetest day of the year.

"Pop culture references will be huge this year," the Halloween & Costume Association said in a statement.

The association noted that couples, families and groups are looking for humorous costumes that are based on "classic fun." That includes the Sazerac Company’s licensed Fireball Whisky couple costume and "The Price is Right" game show contestant costume pack for four.

Nostalgic costumes will have a "big influence" this season with "Ghostbusters," "The Addams Family," and "Dracula" being three notable standouts, according to Halloween & Costume Association.

The association said werewolves and characters from Universal Classic Monsters (the Universal Pictures horror film franchises from 1930s to the 1950s) will make an impression.

Additional items to make an impression include the "usual suspects" such as princesses, superheroes and witches.

Anime costumes will continue to grow in popularity with homemade and store-bought creations that involve accessories like wigs, shoes, weapons and contact lenses.

"With the continuous growth of the Anime industry ($25 billion), cosplayers and DIYers are carving out a place in the Halloween costume market as well this year," the Halloween & Costume Association said in a statement.