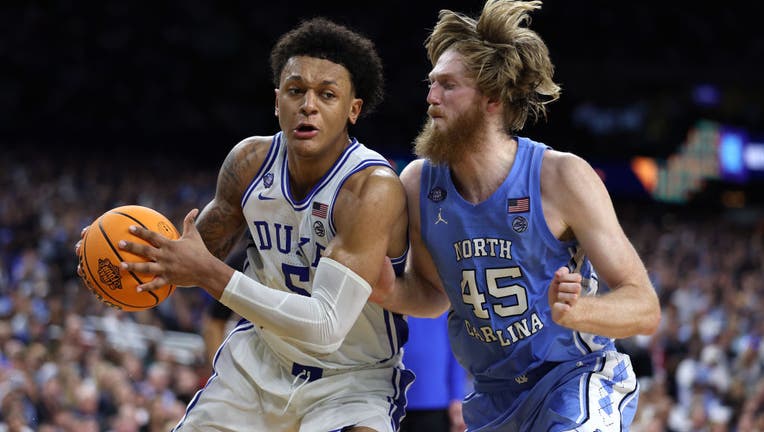 NEW ORLEANS, LOUISIANA - APRIL 02: Paolo Banchero #5 of the Duke Blue Devils drives against Brady Manek #45 of the North Carolina Tar Heels in the second half of the game during the 2022 NCAA Men's Basketball Tournament Final Four semifinal at Caesar

NEW ORLEANS (AP) - The Big (blue) Easy has one more bit of bedazzling in store.

North Carolina and Kansas, basketball blue blood running deep in their veins, are headed to the national championship game.

The Tar Heels got there by spoiling Mike Krzyzewski’s fairytale ending with a gritty performance in an historic rivalry game. Kansas put coach Bill Self in position to win the second title he’s waited so long for with a 3-point barrage against another national powerhouse.

The first course was delightful. The main could be extraordinary.

The Tar Heels (29-9), third on the wins list and the all-time leader with 21 Final Four appearances, pulled out a back-and-forth 81-77 victory over Duke to end Coach K’s 47-year career with a loss to his biggest rival. The Jayhawks (33-6) have more wins than any Division I team in history, up to 2,356 after beating Villanova 81-65 in the first national semifinal Saturday night.

Basketball fans descended on Caesars Superdome in New Orleans on April 2, for the Final Four of the NCAA tournament. (Credit Ari Russell via Storyful)

They’ll meet Monday night in the Big Easy with a chance to add to their storied legacies. North Carolina will be playing for its seventh national championship. Kansas is looking for No. 4.

The Tar Heels got their first season under Davis off to a shaky start, looking as though they weren’t even going to make the bracket. North Carolina found the right gear at the right time, though, rolling into the biggest game in Tobacco Road rivalry history.

North Carolina saved its best for next-to-last, taking down the Blue Devils in their first NCAA Tournament meeting in 258 all-time games. Caleb Love continued his star turn, hitting a key 3-pointer down the stretch and scoring 28 points in a game that featured 18 lead changes and 12 ties. 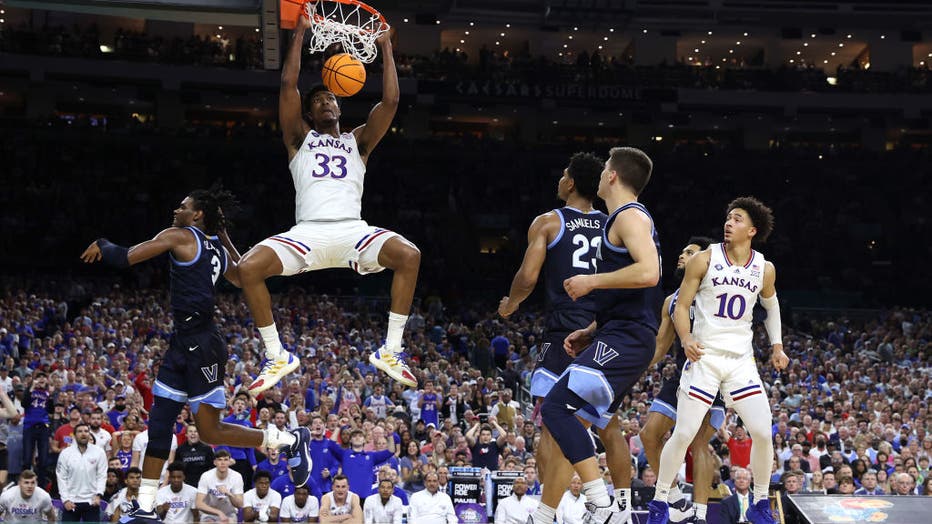 NEW ORLEANS, LOUISIANA - APRIL 02: David McCormack #33 of the Kansas Jayhawks dunks against the Villanova Wildcats in the second half during the 2022 NCAA Men's Basketball Tournament Final Four semifinal at Caesars Superdome on April 02, 2022 in New

Kansas and North Carolina will meet in the championship game for the first time since 1957, a triple-overtime classic won by the Tar Heels 54-53 over Wilt Chamberlain and the Jayhawks.

Now, the Tar Heels get a chance to add yet another title to the one they won under Roy Williams in 2017.

"I don’t know if it was belief or it was just us being delusional. I mean, at every point of the season we knew if we came together as a team that we could get to the championship," said North Carolina big man Armando Bacot, who had 11 points and 21 rebounds despite spraining his right ankle in the second half. "And that’s what we did."

The Jayhawks won the 2008 title in Self’s fifth season in Lawrence, but it’s been a lot of deep title-less runs since: a loss in the championship game, another in the Final Four, five other trips to at least the Sweet 16.

The 2019-20 Jayhawks may have been Self’s best team, but they never got a chance to prove it when the pandemic wiped out the NCAA Tournament.

This year’s version does not have quite the same wow factor, but was one of the most efficient offensive teams in the country.

The Jayhawks flexed their inside-out game to near perfection in the national semifinals against Villanova.

David McCormack bulled his way to 25 points and led an inside game that outscored the Wildcats by 16 in the paint. Ochai Agbaji keyed the 3-point barrage, hitting 6 of 7 to score 21 points. Kansas went 13 for 24 from behind the arc, nearly doubling its 3-point shooting percentage during the regular season.

"Even after this game, even after last weekend, the weekend before that — everyone’s attitude was, on to the next one," Agbaji said. "And not looking too far ahead at what’s going on Monday."

It will be unforgettable for one team and, possibly, everyone else, too.