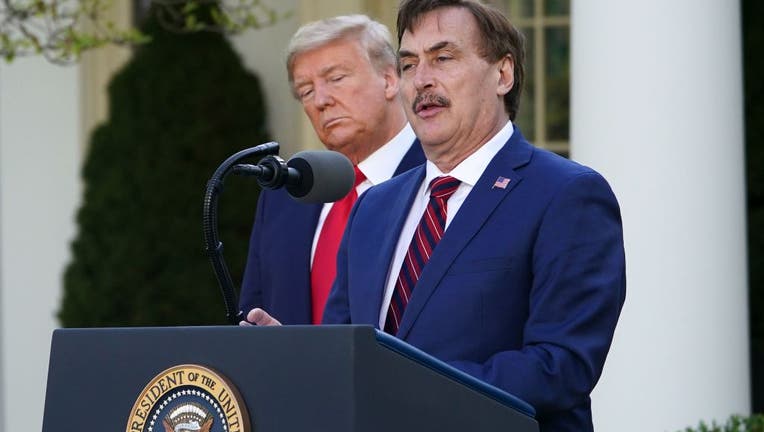 US President Donald Trump listens as Michael J. Lindell, CEO of MyPillow Inc., speaks during the daily briefing on the novel coronavirus, COVID-19, in the Rose Garden of the White House in Washington, DC, on March 30, 2020. (Photo by MANDEL NGAN / AF

Lindell told FOX 9 Bed Bath and Beyond, Kohl's, Wayfair and HEB have all dropped MyPillow because of public pressure on social media he claims is being perpetrated by "leftist groups".

FOX 9 has reached out to the companies for comment.

According to a New York Times report, Dominion Voting Systems has threatened to sue Lindell over his accusations of election fraud. Officials have repeatedly stated there was no proof of widespread voter fraud in the election. The Cybersecurity and Infrastructure Security Agency called it the "most secure election in American history."

Lindell is one of more than 150 people contacted by Dominion over baseless fraudulent claims about the integrity of its voting machines, The Washington Post reported.

NewsNow from FOX recently spoke with Dominion Voting Systems about criticism from President Donald Trump and his voters that the 2020 election results weren’t accurate despite not having any evidence.

The company provided the machines voters used to electronically cast their ballots in 28 states.

In the days after the election, Trump referenced an OAN report on Twitter that accused Dominion of "deleting" large numbers of his votes or "switching" them to count for Joe Biden — one of many baseless theories suggesting vote counting problems that the president has been promoting. The tweet got slapped with a disputed label from Twitter.

Dominion representative Michael Steel addressed the proposal and fraud claims in an interview with NewsNOW.

The company is addressing criticism from President Trump and some voters regarding the 2020 election results.

"This is a non-partisan company," Steel said. "It is the gold standard in some ways in determining transparent, verifiable election results."

MyPillow is based in Chaska, Minnesota.

Be the first to know! Get alerts to stories like this on the FOX 9 App, and subscribe to the FOX 9 Morning Brief email for fresh headlines delivered to your inbox each morning.