Alex George has the latest update in a community outraged over one man seen on video in a racist rant.

MT. LAUREL, N.J. - A racist rant in a quiet South Jersey neighborhood is going viral. It shows a man hurling racial epithets at his neighbor. Monday, a crowd gathered outside the man’s house.

A recording of an altercation on Friday between two neighbors in the Essex Place condo complex is making the rounds on social media.

45-year-old Edward Cagney Mathews argued with his neighbor, spitting and shouting racial slurs in a six-minute rant. When police showed up, he didn’t stop and turned his anger at an officer.

After the video went viral, people started a protest outside of Mathews’ home. A crowd of twenty turned into 100 by mid-day.

JoAnn Pileggi is in Mt. Laurel as a protest broke out near a man's home who was seen on video hurling racial slurs at neighbors.

"The guy is off his rocker and they need to get him out. He cannot be racially harassing and assaulting people, spitting on people, busting down doors, breaking windows and writing white lives matter on stuff," stated Aliya Robinson.

Robinson and her daughter, Jazmyn, said this isn’t the first time Mathews has done this. Jazmyn said he harassed her at a different complex.

"When we first moved there, I guess he didn’t think minorities should live there, so he kicked my door in with my children there," Jazmyn explained.

Police set up a command post as the crowd gathered outside Mathews’ door. At one point, Mathews was seen coming outside, but he didn’t answer any questions and went back inside. 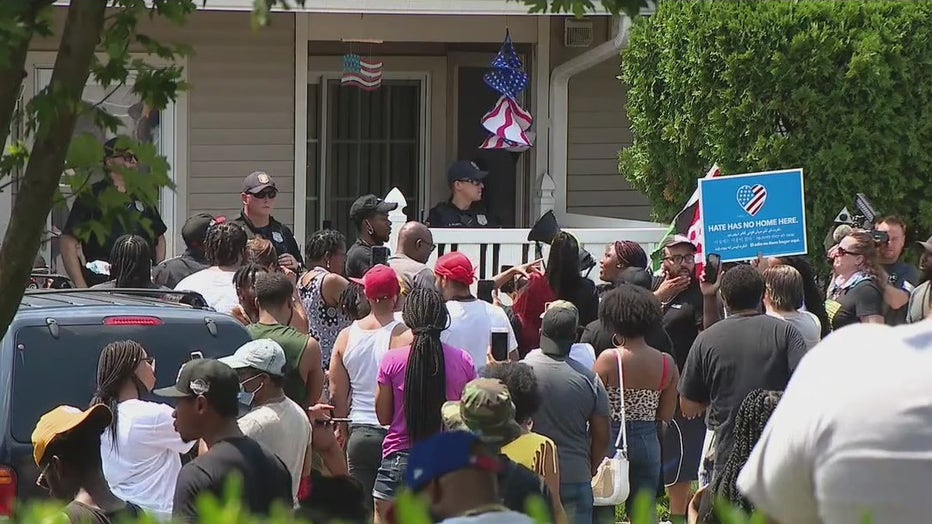 A group of protesters gathered at a residence in Mt. Laurel after the man living there was seen on video hurling racial slurs at neighbors.

"The names he was using, the N-word, calling individuals monkeys, it’s just detestable. It’s really disgusting," protester Gary Frazier, Jr. remarked. "We need to come together and root the stuff out. How we going to fix things and allow this type of behavior?"

The local NAACP President stated those two charges were not enough.

A New Jersey man seen hurling racial slurs in a now-viral video was taken into custody Monday after protesters gathered for hours outside of his home. He currently faces multiple charges.

"We told them flat out the charges are ridiculous and then we learned that when the charges were put out, the video wasn’t released, yet, so we said people aren’t gonna leave here until that person goes out in handcuffs," President of Southern Burlington County NAACP Marcus Sibley said.

After hours of standing outside, some protesters became angry, waiting to see him walked out by police. They threw rocks at the windows. But, that is not the message everyone wanted to send.

"I want to especially commend the victim, who showed incredible restraint with someone spewing foul, vile things in his face. That’s the subject of the charge and really, again, how many of us could show the restraint that this gentleman did? He didn’t deserve that. None of the residents here deserve that," Burlington County Prosecutor Scott Coffina explained.

On Tuesday, authorities revealed that Mathews was expected to remain behind bars until a preliminary hearing that could come by Friday, July 9.

Police also said there would be follow-up on the property damage that occurred in the neighborhood during the course of the day Monday, and with a small portion of the protesters who threw objects at officers.