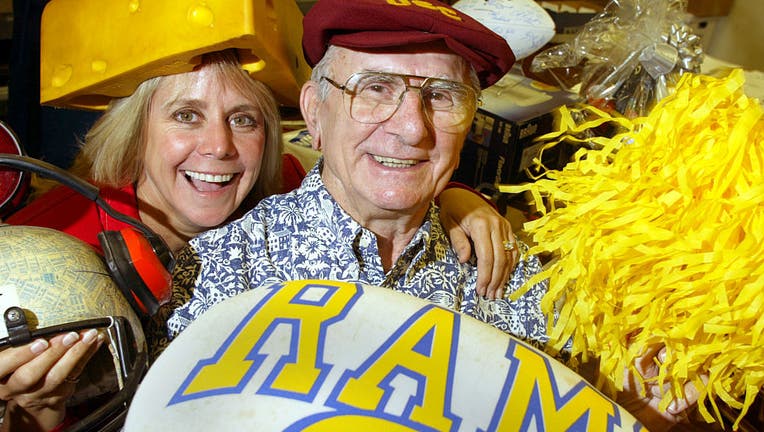 He also lettered as an infielder on the 1948 Trojan baseball team that won the program's first College World Series championship, Tessalone said.

After his playing days, he was a successful sewer contractor, a philanthropist and even had bit parts in several movies, including "Stalag 17," "Angels in the Outfield" and "The Joker Is Wild."

But his greatest claim to fame came when he created the Mr. Irrelevant Award in 1976, presented annually to the last overall pick in the NFL's draft. The awardee is feted during Irrelevant Week activities in Orange County, including an annual fundraiser for local charities such as Serving People in Need.

The week of events is usually held in June. Festivities returned this year after cancellation in 2020 due to the coronavirus pandemic, Salata's daughter, Irrelevant Week CEO Melanie Fitch, told City News Service in May.

"We didn't have one last year because we couldn't bring him out of New York or go to New York," Fitch said of New York Giants linebacker Tae Crowder. "We're looking forward to this year being able to celebrate Mr. Irrelevant."

Fitch noted how much Crowder embraced his title, which has traditionally been a lighthearted jab. The linebacker from Georgia made the team and was a notable contributor, Fitch said.

Usually the event is coordinated with the team that drafts the final player chosen because it depends on when the player is available during the summer of team-related activities, Fitch said.

The fundraiser did not rake in as much money in 2020 as in past years, but benefited from having more volunteers.

"We didn't raise as much money, but our volunteer base grew, so what we were able to do was we were able to help local charities and people in need," Fitch said. "Our major sponsors still came through, so we were able to give money to support SPIN and the Orange County Youth Sports Foundation."

Much of the focus turned to "getting people into housing who lost their homes because of COVID and losing their job," she added.

Salata is survived by his wife of 15 years, Carolyn, Melanie Fitch, his son Bradley, his granddaughters Alix and Marie Fitch, his brother George and several nieces and nephews. He was predeceased by wife Beverly in 2003.