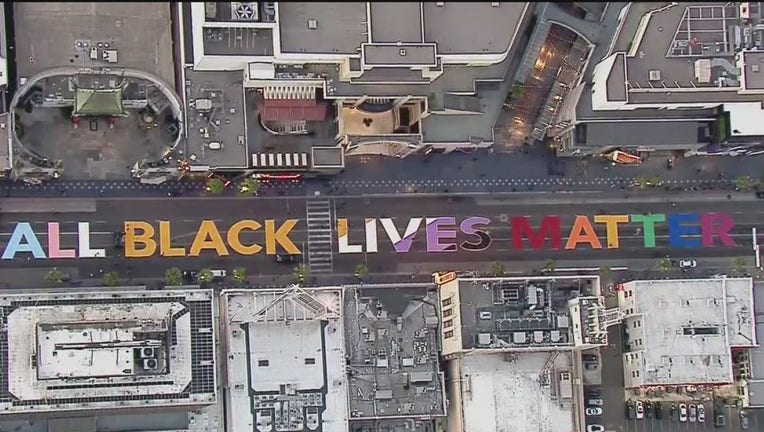 Although he did not specify what type of memorial he had in mind, O'Farrell on Monday ordered that crews stop efforts to remove the mural-like words "All Black Lives Matter" that were painted on Hollywood Boulevard between Highland Avenue and Orange Drive for the march.

Motion to save All Black Lives Matter mural

"We had a once-in-a-generation moment this weekend in Hollywood as tens of thousands gathered for a peaceful demonstration on one of the most recognizable boulevards in America," O'Farrell said. "We now have a chance to memorialize the movement in a meaningful way. I look forward to working with the Black LGBTQIA Action Committee and other community members on this project."

O'Farrell had originally said the motion would be introduced Tuesday, but a spokesman later said it will not be filed until Wednesday.

The motion, if approved by the full council, will direct all "relevant city departments" to work with community partners, including the action committee, Hollywood stakeholders and the 13th Council District's HEART of Hollywood initiative, to conceive and report on options for permanent public art in Hollywood in commemoration of the All Black Lives Matter march, O'Farrell said.

The rainbow-colored installation of "All Black Lives Matter" painted on Hollywood Boulevard was a collaboration between members of the action committee and Hollywood-based entertainment marketing company Trailer Park Group, led by CEO Rick Eiserman. O'Farrell partnered with the group on the permits for the installation.

Crews worked throughout the day Monday to begin removing the installation.

The march, organized by the action committee and All Black Lives Matter, was an opportunity for Los Angeles to stand alongside transgender and queer individuals in the Black community, according to O'Farrell's office.

"The art piece spoke to the intersections of being black, sexual orientation and gender identity that are included in this racial movement,: said Luckie Alexander, who collaborated on the design of the artwork.

"It speaks volumes to the commitment our city has regarding inclusion and equity for the Black community, especially our queer and trans community of color," Alexander said. "As a Black (transgender) man, our specific community has been continually overlooked, and this gives me hope that we will continue to be heard here in Los Angeles."