Anthony Barajas was described by two of his closest mentors as a student leader who was not only fun-loving but deeply committed to the service of others. The 19-year-old was fatally shot inside a movie theater in Corona during a showing of 'The Forever Purge.'

SANTA ANA, Calif. - At Mater Dei Catholic High School in Santa Ana — where Anthony Barajas graduated in 2019 – there’s still a sense of disbelief more than three weeks after Barajas and Rylee Goodrich were ambushed in a Corona movie theater.

The young couple was on a first date. 18-year-old Rylee was fatally shot there, 19-year-old Anthony died from his wounds days later at the hospital. Tragedy does not begin to capture the sadness of this senseless attack.

Recently, FOX 11's Laura Diaz visited the sprawling high school campus in the middle of the city to get a better sense of the young man, who had built a massive following on social media.

A fixture on TikTok with his singing and pranks, Anthony was easy to like. But two of his closest mentors described him as a student leader who was not only fun-loving but deeply committed to the service of others.

Scott Melvin was Anthony’s choir director. Melvin said that Anthony signed up for choir mostly because members of his extended family had been part of the choir. The Barajas’ name is big at Mater Dei. Anthony’s parents, siblings and cousins have all graduated here. Choir gave him an outlet to enjoy singing, while at the same time, allowed Anthony to build friendships. Here he would encourage his fellow choir members to hit all the right notes, with the enthusiasm of a cheerleader. Melvin said Anthony was completely comfortable in his own skin, so when Anthony began posting his music videos online no one was surprised. Melvin suggested to him, maybe he should record these videos in a location other than his car, more conducive to recording sound. But Anthony was having none of it "Mel, I just gotta sing," his choir director recalled him saying.

FOX 11's Laura Diaz speaks with former teachers of Anthony Barajas, who was tragically killed in a movie theater shooting in Riverside County.

But singing wasn’t all Anthony did. He was an honor student, captain of the Mater Dei Soccer Team and "Madrigal King." With a demanding student schedule. Melvin told Diaz, "We shared him."

That’s where Coach Sean Ganey picks it up. He described Anthony as a "lion." The type of player who gave 100% on every play, who consistently displayed leadership skills to his teammates. He also said Anthony was always eager to learn. 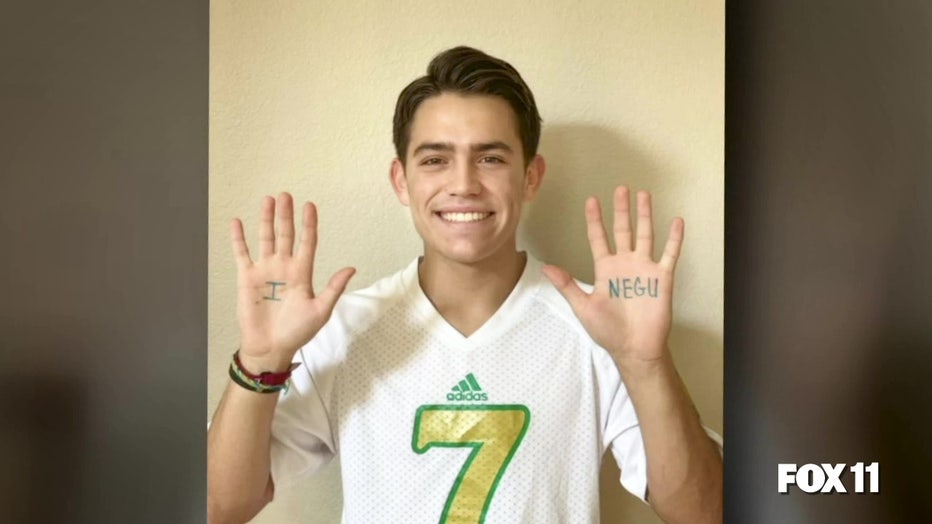 On one particularly busy day, Anthony played in a key soccer match, where he scored a decisive goal and then left at halftime, to run across town. Still sweating when he arrived at the live production, Anthony donned a crown as Madrigal King in the Madrigal Feast play.

As if that wasn’t enough, Anthony was also present very early the following morning in a "servant role" feeding the hungry.

In an emotional interview, coach Ganey wept as he recalled his former star player.

Both men said that Anthony was a young man of deep Christian faith. Melvin said he will always remember Anthony singing during mass, eyes closed, head tossed back… so full of life.